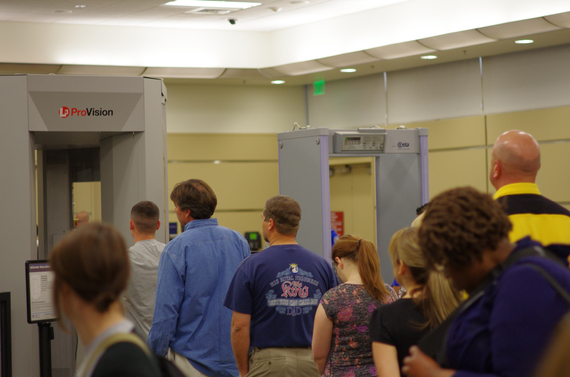 Since atheists aren't known for bombing or highjacking airplanes, should they wait in exhausting TSA airport security check lines? -- Photo by David Prasad

My last month has been increasingly busy as my US Presidential campaign picks up speed, and I participate in more and more events. In the past few weeks, I've made speeches in London, Vancouver, and Palm Springs. I live in San Francisco, so each of these destinations required air travel. Unfortunately, the travel also meant I had to endure long-lined security checks to board airplanes.

We all know the dreaded procedure. Line up like cattle. Then when near the X-ray screening conveyor belt, pull out your laptop and place it in its own plastic tub. Then take off your shoes (and in my case a belt). Then throw in your wallet or purse too, followed by keys, smartphones, and carry-ons. If you have really young kids like I do, then the drama sometimes involves close examination by a surgical-gloved TSA officer scoping out dubious baby formula in a bottle. In fact, in London's Heathrow Airport, they even asked me to take off my wedding ring--just in case it might belong to Suaron, the Dark Lord of Mordor.

In my six flights in the last month, I never managed to get through any security check in less than 40 minutes. Naturally, I wondered if it really had to be this way. Yet, when I looked around me in the security check lines, I found my answer.

A Sikh man in a turban was in front of me. In another line was a Muslim women wearing a black burja. Behind me a Catholic priest in a robe carried a worn leather satchel. Sure, religiosity makes some people fundamentalists. And, historically, such beliefs have been used to perpetrate great harm, including the bombing or highjacking of airplanes.

As an atheist, my beliefs do not make me a fundamentalist--in fact, they make me exactly the opposite. If I believe in anything sacred, it's the scientific method, the rational way of discovery which insists one is able to improve upon some set of facts by systematic observation and experiment, but that improvement is probably still way off from any ultimate truth. Atheists are comfortable without knowing all the answers, and that is something that deeply defines us. 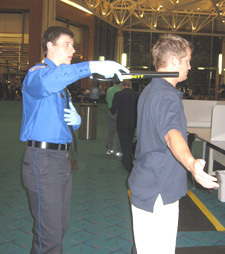 I couldn't help but wonder if I really had to wait in hour-plus lines since no atheist--so far as I could discover--has ever been accused of bombing or highjacking a plane. Atheists aren't attracted to terrorism since they're too level-headed to believe they know all the answers to the universe. They don't need to defend or promote strict ideologies, especially archaic ones.

However, numerous aviation terrorist attacks have been committed in the name of religion--many during peacetime. And it's not just Muslims that are doing it, either. Christians have done it, as well.

As an aspiring politician, I strive to improve society by applying statistical analysis to decision making. I look at numbers and facts, and try to logically create policy that achieves the greater good for society, especially in a scientific transhuman way. I'm wondering if maybe it's time for an atheist security check line for the nearly three billion people that fly every year in the thousands of airports worldwide. After all, nearly 15 percent of the world's population is godless or nonreligious. Millions of productive hours (the equivalent of at least hundreds of millions of dollars) are being spent needlessly by atheists in security check lines every year--all because a number of religious people may use planes as terror weapons.

I envision a fast track line for atheists at all commercial airports, with only visual screening from a distance by TSA personnel. To use such a line, a traveler would simply have to publicly check that they're an atheist when getting ticketed, and then off they'd go through security with no wait.

Such a no-wait line would be interesting for a number of reasons. Firstly, religion is declining in America, anyway. The recent Pew Research Center study shows notable drops in formal religious beliefs. So ultimately, such a fast track line would force wishy-washy believers, or those who are religiously apathetic, to write off their faiths and God in the name of not wanting to wait in exhausting security lines.

On the economic front, less TSA people would be needed, giving tax payers more money in their pockets.

One of the main reasons I'm running for US President is to try to create policies for this country that simply make more sense--in this case: the unproven necessity for airport security checks for atheists. Since religion and terrorism are statistically connected, perhaps we should leave the two to themselves to work out their qualms. But for atheists like myself, to wait in dreaded airport security check lines for about five hours in the last month, is unacceptable. There must be better methods to move secular society forward, and it could start with a conversation about fast track atheist lines that force people to think about religion's true social and economic cost.