What a difference a year makes.

Last September, when I attended Apostacon, an Omaha-based freethought conference celebrating the Church of the Flying Spaghetti Monster, the mood was all ribaldry, mockery and piracy. (Pirates, of the "arrrr, matey" variety, are considered misunderstood divine beings.) 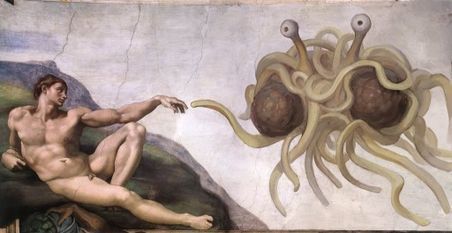 Today, as Pastafarians prepare to make sail for Omaha once again, the church that Bobby Henderson founded as a poke in the eye for Creationists subverting science education is itself struggling with heresy, even as government authorities struggle over whether to recognize religious freedom claims by its followers.

It's not easy to blaspheme in a church whose only dogma is the rejection of dogma. Yet, Bill Whatcott seems to have turned the trick. The evangelical activist crashed a pride parade in Vancouver under an FSM banner to hand out fake condoms and anti-gay propaganda. Invoking its unique ecclesiastical language, the FSM Church has denounced Whatcott as "a douche."

Meantime, authorities in Oklahoma are "reviewing" the driver's license issued to Shawna Hammond , a Pastafarian from Enid. Hammond courageously insisted on wearing a colander on her head for the license photo. (The spaghetti strainer is a devotional nod to His Noodliness.)

Hammond's effort is likely a first in Oklahoma but not in the nation. Eddie Castillo, a student at Texas Tech, broke ground in 2013, and several others have taken similar stands, with varying success.

However, the license photo turns out to have been only the antipasto. In my hometown of Lincoln, Nebraska, an inmate is suing over claims that as a Pastafarian he has been denied his religious rights. According to an account in the Lincoln Journal Star:

Stephen Cavanaugh, 23, filed the federal civil rights lawsuit against the Department of Correctional Services and Nebraska State Penitentiary officials, saying penitentiary staff repeatedly discriminated against him by not allowing him the right to meet for worship services and classes, or to wear religious clothing and pendants.

"The only reason (my) requests were denied is that (my) religion does not conform to the 'traditional' Abrahamic belief structure," said Cavanaugh, who claims he isn't the only Pastafarian at the prison.

Here's where the snickering must stop. Should government at any level in the United States accord members of the Church of the Flying Spaghetti Monster the same rights they would grant, say, the Amish, Orthodox Jews, or Catholic nuns? Absolutely and unequivocally yes.

The simple reason is this: The Constitution prohibits the government to pick and choose which religions it likes and which ones it doesn't. Without that prohibition, freedom of religion has no meaning.

You might think that every American would recognize this, but no. A powerful wing of the Republican party seeks to impose its ideas of Christianity on all Americans. North Carolina, for example, recently passed legislation to permit public school teachers and administrators to take part in school prayers. In their Orwellian way, proponents of the theocratic agenda call it "the defense of religious liberty."

Hence, the Journal Star story attracts comments like this: "Great, just what prisoners need -- to recognize the worship of evil. Isn't anyone in authority allowed to use their better judgment and common sense?"

So, whether or not you think the Church of the Flying Spaghetti Monster is a joke, the stakes are quite serious. Indeed, they go right to the heart of two essential questions: What is nature of religion, and what is the role of government?

Religion is not, as some dictionaries would have it, the worship of God or gods. That's like saying music is the performance of symphonies, or poetry is haiku. In short, it is mistaking an instances of content for the much broader underlying concept. Actually, as I explain in my book Free God Now, religion consists of organized cultural and institutional responses to shared perceptions about ultimate reality.

That being so, who in government has the right to decide what is a legitimate instance of religion and what is not? No one. The First Amendment specifically prohibits the official establishment of religion. Whether it be a lowly DMV employee, a prison administrator, or the governor of a state, no government official has the right to establish one religion's legitimacy over another. I'd go further and argue that the establishment clause, properly interpreted, protects all worldviews, whether religious or not.

Does this mean that anyone can do anything and "get away" with it by claiming that it's part of his or her religion? Not at all. Freedom of religion is a bounded freedom; it ends where it infringes on the rights of others or violates neutral public policies.

Christians have a right to practice "spiritual healing," but not to withhold medical treatment from diabetic children. Pastafarians have every right to hold pirate parties, but no right to make anyone walk the plank -- not that any any follower His Noodliness would.