After the quick, stunning, and relatively easy takeover of Mosul and Tikrit in June, when entire divisions of the Iraqi army threw off their uniforms and fled, it was fair to say that the jihadist army of the Islamic State of Iraq and Syria (now simply called the Islamic State) had reached the apex of its power and influence. The sentiment would be understandable: it takes gumption to overrun a force of approximately 90,000 for Iraq's second largest city in just 48 hours, and shocking the world while doing so.

Yet until recently, IS had lost some of its luster. Its advance southward has been stalled by a combination of stiffer Iraqi army resolve and the deployment of some of the very same religiously-inspired Shia militia forces that were once responsible for abducting, torturing, and executing thousands of Sunnis on the streets of Baghdad. The further south the organization attempted to go, the heavier the resistance it faced. Indeed, at the present day, the prospect that a Sunni extremist movement like IS could sweep into Baghdad and conquer a majority Shia-city is virtually incomprehensible. Baghdad is not Mosul, where poorly disciplined troops were not willing to fight and die for a government they didn't believe in.

Last weekend's developments, however, may have changed that perception. If it told us anything, it's that IS doesn't need to invade and administer Baghdad to instill a international fear or gain the attention of the United States. All it needs to do is push into territory that was thought to be immune from an IS incursion.

Unfortunately for residents of Sinjar, a city in the northwestern corner of Iraq with a sizable population of minority communities deemed "apostates" by the likes of IS, they are discovering how tenacious and battle-hardened the jihadists are -- even if they aren't strong enough to take Baghdad. The fact that 200,000 Iraqi civilians were forced from their homes before and during the IS takeover of Sinjar is not the most disturbing part of the story--the United Nations office in Iraq called the event "a humanitarian tragedy" -- is an example of how disastrous the situation is.

What might be worse than the fleeing of tens of thousands of men, women, and children, you may ask? Well, for those who were a part of that exodus, nothing short of being killed would fit that criteria. But for countries like the United States, there is a darker side to this saga: the sudden retreat of the same Kurdish peshmerga that were once thought to be impenetrable to hostile forces.

Whether or not the peshmerga eventually plan a counteroffensive and drive the jihadists from Sinjar is beside the point. Perception is just as important as reality, and the perception among many is that a battle-hardened Kurdish unit was driven from the area by a better armed and larger group of caliphate-seekers. It's a perception that should serve as a warning to those in Washington who have become somewhat complacent to the killing and rampages that have been perpetrated by IS since the beginning of the year. For if Washington's closest allies in Iraq can be slapped across the face and forced to retreat, there is no obstacle that IS can't overcome with time. 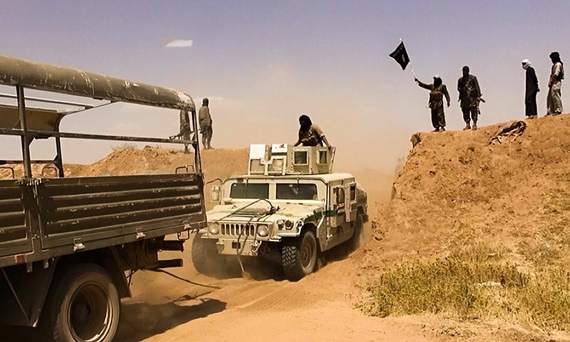 Does this sound a little too dramatic? Sitting here in the United States, it may be. After all, the autonomous Kurdish region is still the safest and most economically vibrant area of Iraq, and its leaders in Erbil are far more supportive of U.S. foreign policy goals in the Middle East than the frustratingly authoritarian central government of Prime Minister Nouri al-Maliki. Yet this is precisely what makes the IS offensive in Sinjar last weekend so distressing: a close U.S. partner is losing ground to an organization so extreme that Ayman al-Zawahiri kicked it out of the al-Qaeda orbit.

The U.S. cannot afford to place the dangerous gamble on the Kurd's staying power. Doubling down on the belief that the Kurdistan Regional Government is equipped enough to keep IS under control is a bet that has lost some of its value. Judging from the State Department's statement on the weekend's events, the good folks over at Foggy Bottom are cognizant of the fact that U.S. coordination and assistance is critical if the Kurds are to stop Iraq from going off the rails completely.

Some influential voices in Washington want the Obama administration to do a lot more with the Kurds than they have done thus far. The Wall Street Journal editorial page, a frequent and harsh critic of the Obama foreign policy, pushed for a stronger military-to-military relationship between the United States and the KRG in its Tuesday edition. "[A]bandoning the Kurds," the paper opines, "after our recent alliance would send the message to the world that this Administration lacks the fortitude to support its friends." Normally, words like these would be easy for the administration to ignore. It's harder, however, when Dexter Filkins of The New Yorker magazine is making a similar argument.

The White House has some thinking to do. Is the security situation in northwestern Iraq so dire that the administration's "one Iraq" policy needs to be reviewed and perhaps changed? How negatively would Baghdad react if the U.S. military began sending weapons directly to the peshmerga? What does that say about IS's staying power? And is there any other alternative?