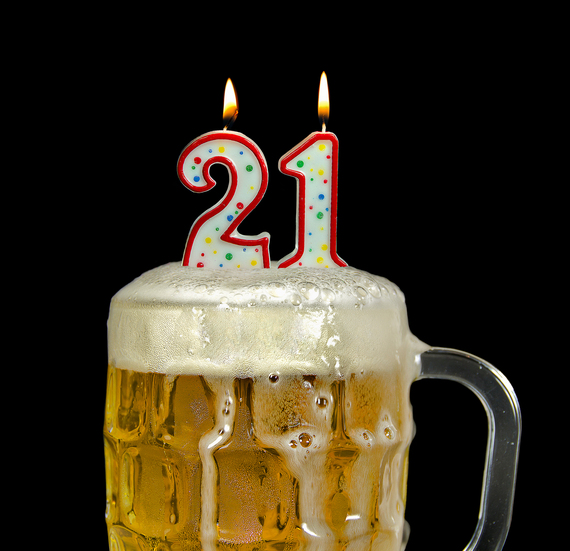 In America, eighteen-year-olds can vote, operate a motor vehicle, pay taxes, marry, become a legal guardian, own a gun, fight and die in a foreign country, and even become governor of the great state of Rhode Island. One could easily argue that one or many of those bears way more responsibility than drinking alcohol. But until you pass America's arbitrary drinking age line (the highest in the world), cracking open a Zima while watching The Bachelor from the comfort of your Rhode Island governor's mansion, with your trusty gun and legal ward in tow is totally off limits.

This isn't some abstract talking point. Three states are attempting to introduce legislation that would lower the drinking age back to 18, and there is a very real possibility it will happen. Would these history-making measures expand on progressive movements happening in our country right now, or would newly lax laws mean even more liquid lubrication for repugnant jerks like this guy? Are we ready to give 18-year-olds the right to drink, again?

More: Cocktails That Need to Be Retired, According to Bartenders 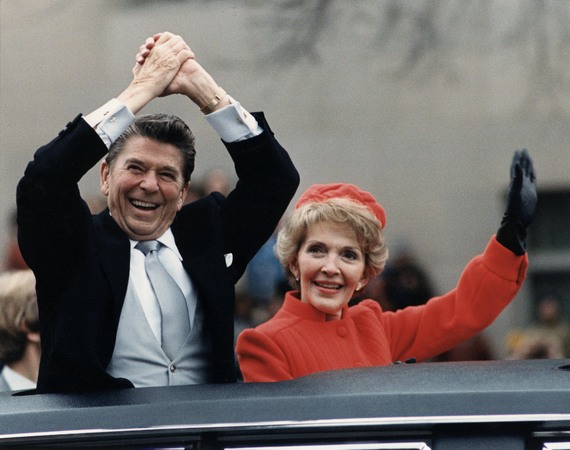 Why is the drinking age 21 in the first place?
The legal drinking age in the United States has been 21 since the National Minimum Drinking Age Act in 1984. When President Ronald "Just Say No" Reagan signed the act, he issued a blanket requirement for all states to raise their drinking age, or risk losing highway funding from the government. (Keep in mind, the week before, Reagan had publicly stated ice cream was "a wholesome and nutritious food.") Previously, states had varying drinking ages (from 18 to the now-standard 21), some of which had separate laws for beer and hard liquor (for instance, 18 for beer, 21 for liquor). So, you could be legally withheld from buying a fifth in one state, but then physically walk over an imaginary line in the ground into another, buy all the bottles of sweet, sweet whiskey your little heart coveted, get boozed up, and then just go home. And people did this. Frequently.

People (like my own mom and dad) who grew up in Western PA in the 1970s were just a short drive away from Ohio, where the drinking age throughout most of the decade was 18 (though in the early '80s, it was 21 for liquor). According to them, it was common for kids close to the border to cross over for a night out, or to pick up beer and smuggle it back over state lines. And obviously, that makes sense. When I was 18, I went to Canada (drinking age is 19 in Toronto!) just to drink. Unsurprisingly, this type of behavior was a key impetus in the decision to introduce the National Minimum Drinking Age Act.

The "interstate beer runs" as my parents would call them, led to what MADD and other similar organizations would call "blood borders." These were stretches of highway known to bring liquored-up kids back to their own, less-alcohol-friendly states... with predictably disastrous results. MADD claims "...the 21 minimum drinking age law has saved about 900 lives per year as estimated by the National Traffic Highway Administration (NHTSA). In short, there are more than 25,000 people alive today because of the 21 minimum drinking age law in every state." From 1982 (remember, this is pre-reform) to 1995, fatal car crashes involving young people with positive BACs dropped from 61% to 31%. That's a considerable difference.

Though maybe the higher drinking age wasn't actually the solution -- perhaps it was that the drinking age was congruent across state lines, which prevented kids from drinking legally in one state, and then driving home. Who's to say the same results wouldn't have been achieved had Reagan made the national drinking age 18? 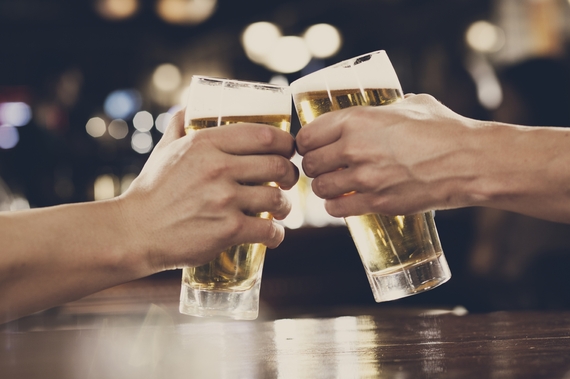 Can we use Europe as a model for lowering the age?
Most proponents for a lower minimum age immediately point to Europe as an example, where the drinking age is lower than 21 almost everywhere. As an American who spent half a year living in France and traveling through other European countries with about a dozen other American college students, I can tell you the difference between the way they drink and the way we drink is akin to comparing someone who enjoys an after-dinner mint to the fat kid who dove headfirst into Willy Wonka's chocolate river.

I remember being fascinated by the level of respect and control young Europeans had when they drank. Their explanation was they had been exposed to alcohol almost their entire lives, as enjoying a glass of wine at dinner is not uncommon for children as young as 12. These kids knew how much alcohol they could handle because they were taught about it in an upfront, transparent way. That's not to say Europeans won't sometimes overdo it, but as a whole, they seem to approach alcohol more responsibly than young Americans do.

"It's always blown my mind how American college culture is so focused on drinking, while most of the students are doing this illegally," said Dr. Patrick Neustatter, author, retired general practitioner, and current medical director at Lloyd Moss Free Clinic. I originally contacted him to give me some insight into the medical aspect of drinking at 18 as opposed to 21 (more on that in a second), but Neustatter, a native Englishman, had a unique perspective on the issue.

"I'm not an expert in this field, of course -- but I will say that as someone who grew up in England, and has lived in America for several decades, I can say it seems like younger Europeans do have a more respectful, controlled attitude towards consuming alcohol," he told me.

This study, however, conducted by the Prevention Research Center, contends that European teens spend more time intoxicated than Americans, which is to some, example enough that the European model of a lower drinking age would be harmful. But, the research never fully details if this intoxication leads to problems like more frequent car crashes, violent crimes, cases of alcoholism, and alcohol-related illnesses and/or deaths, which is pertinent information given that a study by the World Health Organization showed that even though Americans drink less than Europeans, we die more from alcohol-related causes.

And even despite the age-based prohibition, young drinkers still overdo it. The number of reported cases of alcohol poisoning rose from 779 to 2,290 between 1998 and 2005 for 18-24-year-olds in the US.

Which makes me wonder, if European kids get intoxicated more often, but are more responsible with their intoxication, isn't that... better?

Alcohol to an American under age 21 is "forbidden fruit," that entices with its "Don't do this!" mystique, and forces kids into risky behavior. I don't need a study to back me up. I was a teenager who -- to be totally honest -- engaged in a fair share of illegal drinking. The illegal aspect encouraged me away from any controlled settings like bars and restaurants, and forced me to drink and have parties wherever and whenever we could find a secret and often unsafe location (woods at night, abandoned houses, haunted mansions, frat parties, etc.)

You know where kids consistently get into massive amounts of stuff? Frat parties. You know who stops going to frat parties and straight to the bar once they turn 21? Everyone.

To find out a doctor's perspective -- and whether America has an actual case for lowering the drinking age -- get the full story at Thrillist.com!

The Best Beers to Drink This Spring

The Best Small Breweries You Don't Know About, But Should