Is Catholicism to the old media view of journalism as Protestantism is to new media?

To be clear, this isn't an exact metaphor, nor does it in any way reflect my opinions of any branch of organized religion (or those of my employer). It's a tricky metaphor, to be sure, and one I'm on dangerous ground to entertain.

The notion was suggested by a conversation I had with Steve Waldman and Arianna Huffington at the FTC's workshop on the Future of Journalism in DC, where she gave a fiery (and funny) defense of new media, aggregation, and the shift to a more social news experience online. (Talking with Waldman about the future of journalism had its own resonance, given his new role as a media advisor at the FCC.) 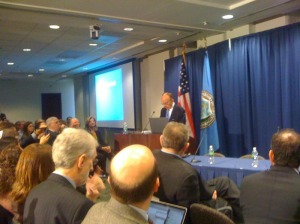 As Huffington put it, "with so many traditional media companies adapting to the new realities, it was ridiculous to engage in an us vs. them, old media vs. new media argument." Her remarks followed those of Rupert Murdoch, whose speech was ably chronicled by Danny Sullivan in his liveblog of the FTC's journalism workshop.

Students of history recall that Martin Luther broke away from the Catholic Church after his efforts to reform it were balked. That break resulted in a schism that roiled Europe for centuries. The metaphor may be apt here because of the way that readers are consuming the news has become more social. Protestants, particularly Quakers and Unitarians, embrace a personal relationship with a higher power that is not mediated by a priest. Historically, Catholics have relied upon priests to guide worship and intermediate their relationship with the deity. In medieval times, priests read the Latin in the Bible that illiterate parishioners could not.

The traditional "high priests of journalism" -- newspaper and magazine editors -- controlled what was covered, which letters to the editor were published, and where and when stories were run.

No more, or at least not in online news. Increasingly, readers have formed a more direct relationships with the sources. Even if the editors at the New York Times or Wall Street Journal choose not to cover a story, if someone uploads video from, say, an ACORN office, a campaign event in Virginia or a street in Tehran, the world can view it, share it and discuss it.

The very existence of this post is evidence of how the tools for production of news have been democratized. I've written about the trend before, when I blogged about NPR and PBS's unconference or asked how, if we are the media, it changes society. And folks like Jeff Jarvis and Dan Gillmor have been writing about the transition to grassroots journalism for years.

It's not at all clear yet what the 95 Theses of this "Reformation" in journalism will be. Online journalism ethics still pertain, and viable means of subsidy for production of that journalism will have to be tested and refined.

Today's FTC hearings contrasted disparate views from Rupert Murdoch and Arianna Huffington, a contrast in both belief and model, along with a panel of newspaper executives who frequently focused on newspapers' past, not journalism's future. "The Reconstruction of American Journalism," authored by Len Downie and Michael Schudson, points to business models and challenges alike.

Huffington's speech, published simultaneously at the Huffington Post as "Desperate Metaphors, Desperate Revenue Models, And The Desperate Need For Better Journalism," led off with her belief that:

...the future of journalism will be a hybrid future where traditional media players embrace the ways of new media (including transparency, interactivity, and immediacy) and new media companies adopt the best practices of old media (including fairness, accuracy, and high-impact investigative journalism).

Perhaps 2010 will be the year that a reformation of journalism will find a workable medium between leaner, traditional news media, the growing flock of distributed contributors, and the higher power -- civic good -- that its audience expects and needs.