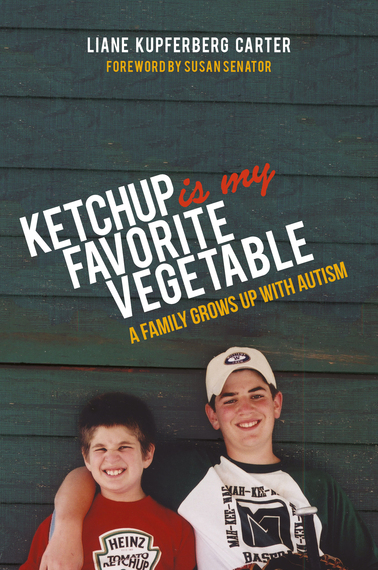 Soon after my autistic adult son Mickey started his day habilitation program, his counselor emailed me. "What do you think about encouraging Mickey to try a salad maybe twice a week?"

Good luck with that, I thought.

When Mickey was still in school, we packed him a bag lunch, or teachers took him food shopping and taught him to make his own meal. Now a young adult, he visits the food court at the mall. The day hab staff tries to guide his choices, but he chafes at their restraint. He wants to eat what his friends eat. Armed with his wallet, he is heady with unaccustomed freedom.

"Today I had a double cheeseburger, Chicken McNuggets and fries," he reports.

"Anything else?" I ask, cringing.

Mickey's idea of "healthful" is ordering a small fries instead of jumbo. Every time he asks for fast food and I point out that it is not good for him, he says, "Just for today? Because I was good?"

"It's not about being good," I say. "It's about staying healthy."

Mickey doesn't have a significant weight issue. We want to make sure it stays that way. My husband Marc's family has a history of heart disease. Marc is a fanatic about eating right and exercising. We are trying to teach those habits to Mickey, but it's a slow slog up a muddy hill.

"I tried a new food today!" Mickey announces. "A vanilla cupcake instead of chocolate."

Mickey has sensory issues, which means that it's hard for him to distinguish good flavors when he can't get past disturbing textures. Lettuce repulses him. Carrots make him gag. For years, we tried unsuccessfully to desensitize him. I puréed vegetables and sneaked them into tomato sauce, but no matter how well I hid it, he'd find that fleck of parsley and pick it out suspiciously: "Hey! What's this green thing?"

In high school, his teacher told us we should make Mickey vegetable smoothies: "Just put kale in the blender."

"And who's going to get him to drink that?" I asked, thinking, Obviously you don't have children.

If Mickey asks for a milk shake, I toss fruit, skim milk, a dollop of frozen yogurt and ice cubes in the blender. We make egg white omelettes. Organic baked chicken nuggets. Oven-roasted "French fries." We offer him fruit and low-salt, low-fat snacks. When we eat out, Marc often pulls aside the waiter and whispers, "We'll pay for the full portion of fries, but please just give him half."

But restricting portions and modifying how we cook doesn't teach him to like healthier foods. Nor does the outside world serve the low-fat versions we make at home. Maybe it's unfair to expect him to show self-restraint at the food court. After all, anyone's steely resolve can crack over a Krispy Kreme donut. How do we convince him that just because it tastes good doesn't mean it's good for you?

We can't control what he eats outside our home. What we can do is talk repeatedly about making healthful choices. We tell him that the best option at the food court is a turkey, cheese or ham sandwich from Subway. One slice of pizza, not two. Food court staples like Nathan's or Burger King should be the last resort, and if he must, make it a burger or nuggets. Not both.

Teaching Mickey to make better choices is a work in progress. In the meantime, I hope that ketchup really is a vegetable.

Because it's still the only one he eats.

More:
special needs parentingParentsautistic-adultsAutismHealthy Eating
Newsletter Sign Up
Raise the kind of person you'd like to know
Subscribe to our parenting newsletter.
Successfully Subscribed!
Realness delivered to your inbox