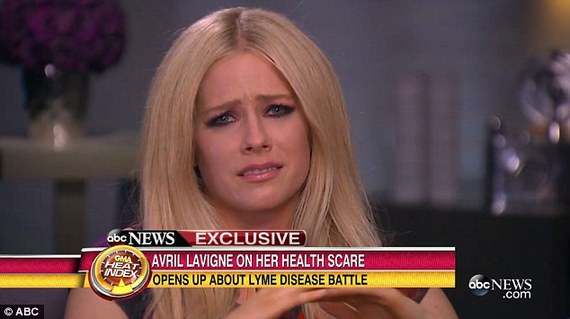 Last February I finally got a true medical diagnosis for the cause of some of my health problems: Meniere's disease, which an ENT specialist said caused the characteristic hearing loss and sudden and totally disabling attacks of vertigo, which involved suddenly vomiting all over a friend during a (sober) Sunday brunch before being carried home, as I couldn't walk unassisted. In an incredible coincidence, after five years of medical investigations, I received my first official medical explanation of some of my symptoms on the same day my mother found a copy of the prescription for doxycycline that I was given at age 18, when I was diagnosed with Lyme disease.

When I was diagnosed with Lyme in 1997, I was given 100 milligrams of doxy twice a day for 10 days -- a treatment 10 to 20 days shorter than what is currently prescribed for acute Lyme treatment. Given my symptoms, which sometimes are frighteningly similar to those of multiple sclerosis, sometimes like rheumatoid arthritis, and sometimes (really) like Alzheimer's disease (I rely on text messages to myself to remember, for example, where my car is parked -- in my 30s), it was clear to the Lyme specialist I ultimately found that this disease has been progressing inside my body for half my lifetime. I am 37 years old, and about 80 percent of the time live the lifestyle of someone in his 70s.

As discussed in the first part of this story, I've lived in fear of HIV all my life as a gay man who came of age in the 1990s, when an HIV diagnosis was a death sentence. Ironically, I am essentially living now with AIDS -- not HIV, but full-blown AIDS, without having AIDS at all. Lyme and associated diseases are a true modern-day epidemic, with the U.S. Centers for Disease Control and Prevention finally admitting last year that at least 300,000 new infections take place within the United States each year. Over a decade, that means any given American's chance of contracting could be as high as one in one hundred. Think about that.

Lyme is woefully misunderstood by medical science to this day, having been tremendously underestimated for decades in its prevalence and its effects. As high-profile people from Real Housewives of Beverly Hills's Yolonda Foster to singer Avril Lavigne and Ashley Olsen have "come out" about their experiences with Lyme, people are finally becoming aware of the effects it can have -- and yet, as with AIDS early on, the CDC is seriously lagging in accepting the reality of it. I never knew before landing in this nebulous medical terrain that a medical condition could be politically controversial, but Lyme disease is just that.

CDC and the Infectious Diseases Society of America (IDSA) are in a fierce battle with the International Lyme and Associated Diseases Society (ILADS) and Lyme patients about the reality of this disease: CDC and IDSA maintain that it is "easy to diagnose, easy to cure," and absolutely dismiss the persistence of symptoms over time, despite treatment. ILADS contends that both CDC and IDSA are denying the real risk posed by the Lyme epidemic (If this is true, why?) and the organization continues to recommend its own treatment guidelines vs. the CDC and IDSA guidelines.

While it is tempting to think that the CDC is the absolute authority on medical treatment, my home state of Virginia -- one of the greatest Lyme "hotspots" in the world -- established legislation in 2013 to require doctors to disclose to patients whose Lyme disease blood tests are returned negative that they may still have been infected with the disease. This is due to the tests' relatively low sensitivity. While the CDC and IDSA continue to insist that treating Lyme and associated diseases with antibiotics is reckless and does not aid Lyme recovery, after seven months of taking antibiotics and an array of supplements (at great cost), I feel about 90 percent recovered on most days -- following five years, from 2010 through February 2015 of becoming slowly disabled, physically and mentally, with pain that I truly would not wish on my worst enemy. The treatment is working; yet, CDC insists that it doesn't.

Early in the AIDS epidemic, the director of the CDC tried to quell public fears by implying that unless a person is a gay man, an IV drug user, or from Haiti, he or she is not at risk of contracting HIV:

... persons who may be considered at increased risk of AIDS include those with symptoms and signs suggestive of AIDS; sexual partners of AIDS patients; sexually active homosexual or bisexual men with multiple partners; Haitian entrants to the United States; present or past abusers of IV drugs; patients with haemophilia; and sexual partners of individuals at increased risk for AIDS. (Source)

CDC was woefully wrong: We now know, of course, that heterosexual women who do not practice safer sex can readily contract HIV, as well. And despite then-existing evidence that people from Haiti were living with AIDS, it certainly was shortsighted at best and truly counterscientific to imply that any disease exists only within national boundaries. It's a hard pill for many first-world countries to swallow, but infectious diseases do not respect our borders. Even those with the financial resources of, say, Donald Trump, despite any efforts he may make, will never build a wall great enough to keep a disease spread by insects and other vectors out of any country. Yet despite this reality, the United States is not the only nation that has nonsensically and inexplicably politicized Lyme and associated diseases:

This phenomenon has become a bizarre case of regulators throughout the world ignoring countless patients' obvious physical symptoms, taking the word of faulty laboratory tests over the word of those whose lives have suddenly come to a halt. In so many cases, as was my experience, the majority of physicians, from general practitioners to specialists, run tests, look at numbers and images, and say "actually, despite how you think you feel, you are healthier than many of my patients except that you obviously need to be treated for anxiety." I can't tell you how many times I was told I'm thinner than most and younger than many, and therefore should be living a more vital and vibrant lifestyle -- when I protested and said that things such as a leg that goes in and out of use, double vision, severe joint pain, peripheral neuritis and cluster headaches had paralyzed me and, yes, made me wish I wouldn't wake up the next morning, several doctors recommended counseling as a means by which to treat my physical symptoms. A few, who I respect for their honesty, told me that they agree something obviously is wrong, but since it can't be detected by tests, the only medically appropriate response is to wait and see what develops over the coming years. I was told by the one neurologist who was extraordinarily respectful at the Washington Hospital Center that if I lose the use of a limb for longer than one week, experience double vision for longer than one week, or lose control of my bowels, I should call back immediately; anything less would likely result in just more expensive tests that would yield no answers.

A couple of weeks ago, the Patient Centered Care Advocacy Group issued a statement alleging that the IDSA has been intentionally misinforming the public about the real dangers of Lyme by "covertly setting government policy on Lyme disease and misinforming the public about the disease for the past decade," rejecting the experiences of many that Lyme can become a chronic illness, and that unlike HIV tests, which are close to 100 percent accurate, Lyme antibody tests are dangerously insensitive and inaccurate. This follows a previous similar challenge to the IDSA that caused it to review its guidelines because of serious conflicts of interest.

I want to make it clear that when comparing Lyme disease to AIDS here, it is to underscore the severity of the disease and to point out the unspoken reality that the regulation and communication of this disease is affected by politics of uncertain foundation. I am in no way suggesting that Lyme or associated bacteria have anything at all to do with the HIV virus: There is no relation. Nor am I fearmongering and suggesting that we will suddenly see a mass die-off as we did with AIDS victims.

After my previous installment was published, I received an important note from Dr. Raphael Stricker, a past president of the International Lyme and Associated Diseases Society, who in one statement summarized both the severity of Lyme disease and the difference between Lyme and AIDS: "As I often tell patients, Lyme disease usually does not kill you the way AIDS does, but it often makes you wish you were dead."

That's no exaggeration. The physical pain, mental confusion, and medical quandries related to Lyme make many patients feel that life is simply too challenging and confused to want to continue. I have gone to sleep on countless nights praying that I wouldn't have to wake up to continue the battle. So again, Lyme is not AIDS, but Lyme can be as devastating on the body as AIDS is -- up to the point of death. Ask a patient whose life has been devastated by Lyme, and you may be surprised to hear her tell you that AIDS is a more compassionate disease in that the suffering eventually ends. Lyme goes on and on, and the symptoms can vary so much from one day to another that it can be maddening and seem unreal even to the person experiencing them. Watch musical artist Avril Lavigne break down -- so bravely, at the risk of ridicule (trust me on that) even from the medical establishment -- for honestly discussing how severely Lyme has affected her life. I absolutely do not want to sensationalize the effects of this disease; in this video, you can see the real emotional toll this disease has on people. What you don't see is the physical pain, the fatigue (of an inexplicable level unless, maybe, you've had mononucleosis -- it's close to that), the 'brain fog' that can leave a person in a state of Alzheimer's-like confusion. Go to 0:45 of the video and listen as her voice breaks: This is a strong and courageous person who, if she had cancer, would be allowed and encouraged to cry it out. With Lyme, patients are compelled to fight through the tears and articulate their experiences, lest people call us "dramatic" or crazy.

As someone living with, and sometimes disabled physically and compromised cognitively by this disease, I am desperate for gay men in particular to pay attention to Lyme. I am begging, because of a new medical revolution called PrEP that has been a godsend for many, but which also can lend a false sense of invulnerability to non-HIV diseases. In the next and final installment of this article, I will explain why.

CORRECTION, Nov. 2, 2015: An earlier version of this post erroneously reported that legislation passed in Virginia in 2013 protects physicians who treat Lyme patients with antibiotics. It does not. Rather, it requires physicians to inform patients with negative Lyme disease test results that they may be infected with the disease despite negative test results.