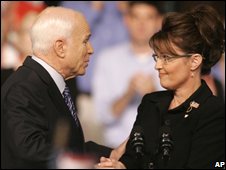 I love the 2008 presidential campaign. It's not only the most exciting, most historic and one of the most hotly contested races ever, it's starting to become fun too. That is, if you're a Democrat. If you're a Republican, I suspect you're not having such a great time.

The Democrats are coming off a kick-ass convention week where their rock-star nominee, Sen. Barack Obama, has jumped about 9 points in the polls following his brilliant acceptance speech. To the contrary, this week began with a postponement of the much-hyped RNC convention amid controversy, scandal and humiliation. The public reason was Hurricane Gustav. The real reason is more likely the continuing shitstorm created by Sen. John McCain's selection of Alaska Gov. Sarah Palin as his vice presidential running mate. That and the embarrassment President Bush, McCain and the Republican party still face over the government's abysmal reaction to Hurricane Katrina in 2005. In fact, the anniversary of the mega-storm which hit the Gulf is almost three years to the day of the RNC's first convention day. Embarassingly, on that day, Bush and McCain were in Phoenix celebrating Grandpa John's 69th birthday. Yeah, I'd say this week's delay is to give pause so the party can regroup and figure out just what its next steps are, in particular in dealing with the Palin controversy.

And the Palin mess is getting uglier by the minute. The NY Times Tuesday reports that, in addition to Palin's daughter being five months pregnant, she's hired a private lawyer to defend her in her abuse-of-power investigation; was a member of a political party seeking Alaska's secession from the Union; and that her husband Todd was arrested 22 years ago for drunken driving. Jeez, the Republicans sure have a distorted view of "family values," huh? With McCain's temper, we can only imagine how much yelling and screaming must be going on behind the scenes right now.

But McCain likely has only himself to blame. Word on the street is that no one in his vice presidential selection committee but him wanted Palin. He wanted his pal Sen. Joe Lieberman, but hastily switched plans last-minute in a likely act of desperation following Obama and the Dems Denver blowout. His move, purely political to seduce Sen. Hillary Clinton's disaffected women supporters, hardly is a "country first" strategy. If McCain was/is so concerned about country, he wouldn't be pushing to put it in the hands of the very inexperienced Palin in the event something were to happen to him. He'd give us someone like Sen. Joe Biden, the Dems' VP nominee.

So what is McCain and the party to do? Don't be shocked if there's a surprise announcement early this week from Palin, something to the tune of:

It is with deep regret that I am withdrawing my name from consideration as the party's nominee for vice president of the United States of America. Given my daughter's pregnancy, the difficulty in raising a Down syndrome child, and the ongoing personal investigation in Alaska, I feel there are too many distractions right now that would not allow me to effectively fill my role as vice president, both over the next 2 months as Sen. John McCain's running mate, and after he is elected president. It is my duty therefore to step aside so that Sen. McCain and the party can replace me with someone who can and will be able to devote 100% of his or her time to this extremely important position. Americans deserve that. Thank you.

Deja vu all over again. Sarah Palin/Harriet Miers. The names are interchangeable. And just like Bush did in replacing Miers with Samuel Alito Jr., Grandpa John will quickly replace her with someone who'll really get conservatives excited. Someone like Gen. David Petraeus, Mitt Romney, Mike Huckabee, Gov. Bobby Jindal or, yes, even Lieberman. All in time for the RNC convention to remain a right-winger's dream event. But, while he'll be getting rid of one problem, he'll be creating another: the judgement issue. Either way, he' a loser.

Have I mentioned how much fun I'm having?