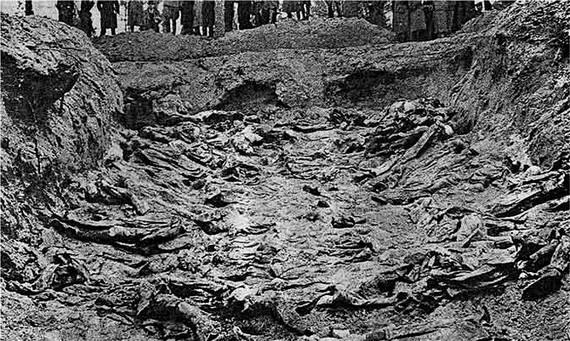 Blocking accountability and seeking to blame others for its crimes, even when premeditated is a KGB tactic, but only marginally successful. Putin should have learned the lesson that the truth is bound to come through. However, he uses Russia's veto within the UN Security Council in the vain pursuit of pressing upon the world fairy tales and revisionism where the rule of law should be permitted to deliver its historical verdict. The KGB and its agents, allies and proxies, from Katyn to Srebrenica, to the downing of Malaysia Airlines MH17 may defer justice but they cannot avoid the judgment of history.

Invaded Poland in Pact with Nazis:

The order to execute 22,000 Polish officers and intelligentsia came directly from the Soviet secret police, the NKVD, a KGB predecessor in the spring of 1940 after the invasion of the eastern part of the country by the USSR, (in a pact with Nazi Germany to dismember Poland.) The "initiative" was launched by the NKVD's chief Lavrenty Beria, and was adopted by the Soviet Politburo including Joseph Stalin. After the Polish Resistance Government started to suspect the mass crime in 1943, the Soviets blamed the killings on the Nazis. By 1941, the pact between the Soviet Union and Nazi Germany to invade Poland had been broken. The Kremlin thought it opportune to point blame upon the Nazi's and change the date of the murders to 1941 by when Hitler's hordes had advanced upon the formerly USSR  killing fields or more accurately killing forest. When the Polish Resistance blamed the Soviets, the USSR promptly sought to punish it by cutting off diplomatic relations with Poland's Government in exile.

For decades, the Kremlin maintained the fiction of accountability. Glasnost changed the dynamics the truth would no longer could be stuffed back into the bottle. Starting in 1990, the USSR and its successor Russian state launched a new investigation. By the turn of the century the Russian Prosecutor's Office confirmed the USSR's responsibility, at least that of Stalin himself. The culpability of the KGB and its predecessors was obfuscated. More concretely, Moscow has refused to acknowledge these mass killings as a war crime or genocide, (as evidence clearly points to eliticide which would point toward genocide.)

Employing obfuscation similarly as substitute for accountability, Moscow recently vetoed a resolution at the UN Security Council which would recognize the Srebrenica systematic killings as genocide. Moscow was urged by the nationalist President of Serbia and its de facto proxy within BiH. However, Putin is also a willing actor, the main protagonist, from BiH to Ukraine, in an effort to carve out cold-war like spheres of influence employing ethnicity, religion, fear, conflict and ethnic cleansing as cleaver. (See: "Construction According to Putin's Model, from Bosnia to Ukraine.") 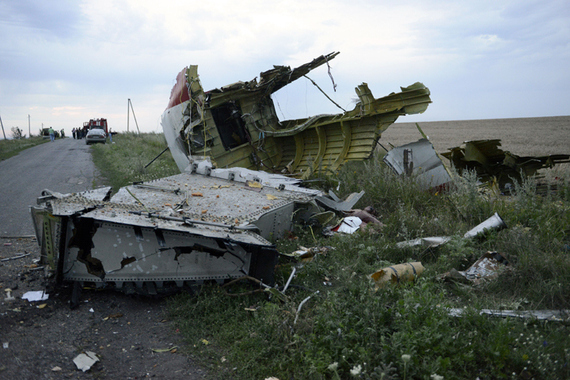 Some of those who joined Serb ultra-nationalist paramilitary units to engage in ethnic cleansing and genocide within BiH are now leading the pro-Putin "rebels" in Ukraine, including the alleged commander who pulled the trigger in downing MH17. Igor Strelkov is purportedly a former Russian intelligence officer and two decades earlier was a member of the gang-style paramilitary that executed much of the brutality and killing in BiH. At the time of the shooting-down of MH17, Strelkov was one of the more visible commanders of the "rebels." (See: "Meet Igor Strelkov, the Face of the Insurgency in Eastern Ukraine.")

Malaysia, The Netherlands, and several members of the UN Security Council have sought an international tribunal to investigate and if necessary prosecute those culpable for the downing of a civilian airliner and killing of 298 passengers. Moscow though has sought to block such tribunal. Employing their standing as a Permanent Member of the UNSC and at least implicit threat of veto, Putin's diplomats have managed to stave off the call for an independent international tribunal. However, this tactic may prove of dubious durability, much like the Kremlin's vetoing of the Srebrenica genocide resolution or the efforts to lay blame on others as in the Katyn Massacre.

Kremlin, Again Deflecting Accountability: Malaysia intends to submit a formal resolution, and the Dutch who lost the most citizens will continue to demand answers via such independent procedure. The BUK anti-aircraft system, responsible for downing MH17, is a Russian system. MH17 was downed over pro-Russia rebel territory. It is not clear whether the anti-aircraft system was operated from Russia itself or from Ukraine-rebel-held territory. Little doubt though that Commandant Igor Strelkov and cohorts, (with extensive history of shadowy links to the Kremlin as well other military adventures beyond Russia's border,) are in the least suspects in the MH17 crime.

The International Criminal Court (ICC) is an additional potential address for investigation and potential prosecution of those culpable for MH17. Unfortunately there has been some hesitation in bringing the ICC comprehensively to address all grave violations of international humanitarian law in the context of the conflict in Ukraine. Moscow could not veto the ICC, (although the UNSC presumably could defer prosecution for a period.) As the US remains outside the ICC as member, along with China and Russia, this also projects more the need for reform within the UNSC and particularly use of the veto, even more so than any incapacity of the ICC.

The downing of MH17 like Srebrenica still shows that mass murder is possible in the name of nationalism, ideology or even religiosity. The shadow of grave violations of international humanitarian law is now cast to Syria, Iraq and beyond. No doubt the Assad regime and ISIS leaders need to face the rule of law before an international court. (See: "Confronting ISIS...") The Katyn Woods Massacre and the Holocaust are not mere historical footnotes. Even if Putin, allies and proxies may avoid punishment for now, their efforts to undermine the rule of law only presses to the surface a judgment of condemnation that will not be buried for decades like the Katyn Massacre.