Mindfulness is truly having its moment right now. It's the Year of Mindful Living, the age of the Mindful Revolution. Mindfulness is branching out from clinical and therapeutic settings and entering classrooms and boardrooms, congressional offices and military bases. Each day, scientific research confirms the physical, cognitive and emotional benefits of a mindfulness practice.

The more ubiquitous mindfulness becomes, the more people begin to ask questions about it. And let me just say for the record, I think both of those are good things. I truly believe mindfulness has the power to transform our lives and our world. And I absolutely believe that questioning is a good thing -- knowledge is power! Don't jump on the bandwagon of a trend just because it's on the cover of Time magazine and Kobe Bryant does it. As Immanuel Kant implored us to do centuries ago, "Dare to know!"

One of the most common questions raised about mindfulness is this:

Is mindfulness a religion?

Mindfulness can be defined in many ways -- the definition I like is simple: compassionate and intentional awareness. Mindfulness is the practice of paying attention -- to thoughts, physical sensations, and the environment -- without constantly feeling the need to judge what's happening or to make it other than it is. To cultivate this present moment awareness, we pay attention on purpose, with an attitude of kindness to ourselves and others.

Words like "meditation" and even "mindfulness" may make us think of berobed hippies or esoteric practices conducted in the mountaintops of Tibet, but mindfulness can be as simple as taking a few deep breaths before an important meeting, or bringing our full awareness to a moment spent with our children. Cultivating this compassionate and purposeful awareness allows us to be present for the important people in our lives, as our kind attention is the most loving gift we can offer.

Mindfulness is a way of being in the world. It is being present and available. It is a fundamental human capacity. You've probably experienced it before, whether you've labeled it as such or not. Think of a time when you were so engaged in an activity -- creating a work of art, playing a sport, reading a good book -- that your entire being focused on that one activity. That heightened state of attention is mindfulness.

Mindfulness is a way of meeting our experience with the presence of mind to respond skillfully to life's challenges, rather than reacting based on intense emotions. It teaches us an awareness of the habits of our minds and allows us to catch ourselves in negative patterns of rumination. We may see that a good deal of our suffering comes from the stories we tell ourselves about the events in our lives, rather than from the events themselves. This human practice of compassionate and intentional awareness requires no dogmatic or spiritual beliefs.

But doesn't mindfulness have religious origins?
Mindfulness has its origins in contemplative practices that go back thousands of years, including Buddhism, Hinduism, Taoism and Stoicism. Some of these are religious traditions, and some are not.

Virtually every spiritual tradition has practices for mindful contemplation and silence, and direct awareness of experience, such as Catholic centering prayer, Buddhist meditation, the Jewish Shabbat or Sufi mysticism. Many secular philosophies incorporate these teachings as well. The Roman Stoic philosophers Seneca, Epictetus and Marcus Aurelius advocated an approach to life that today we might label as mindfulness; Aurelius wrote, "Our perturbations come only from the opinion which is within."

And when it comes to compassion, well, there's a reason they call it The Golden Rule. No tradition has a monopoly on empathy and love and kindness. Educator Daniel Rechtschaffen sums it up this way: "Mindfulness does not belong to Christianity, Buddhism, or Taoism, just as the breath we inhale and exhale does not belong to any one of us."

The fact that so many of our traditions -- religious and secular, spiritual and philosophical -- come back to these fundamental practices of compassion and awareness suggests that mindfulness is simply part of the human experience. As Rechtschaffen writes, "Everywhere human beings have lived, we have needed to cultivate attention; whether it was for hunting, fashioning tools or clothes or intellectual pursuits. We have always needed compassion to live in harmony and enjoy our lives." 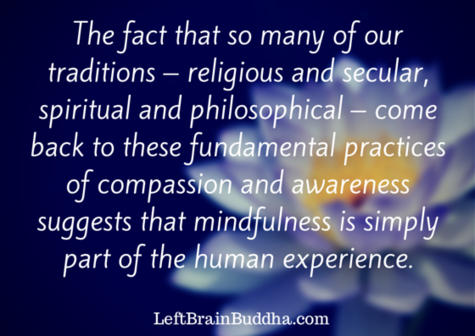 The mindfulness that is taught today in hospitals, clinics, schools, military bases and corporations is based primarily on Mindfulness-Based Stress Reduction (MBSR), developed by Jon Kabat-Zinn (a physician at the University of Massachusetts Medical Center) in the late 1970s. He created MBSR to treat patients who suffered from chronic pain, and hadn't responded to traditional treatments. He developed MBSR based on his knowledge of meditation and yoga, but he stripped them entirely of their metaphysical and spiritual components. Most amazingly, he found that simply teaching people meditation and mindfulness helped relieve their physical pain!

MBSR courses today (there are thousands of them across the US) teach basic meditation practices such as body scans and breath awareness, as well as gentle yoga and movement exercises. They are completely secular -- they are essentially teaching life skills for coping with the human experience.

Mindfulness has become a core component of many mental health therapies today, including Mindfulness-Based Cognitive Therapy (MBCT) and Dialectical Behavioral Therapy (DBT). Corporations like Google and General Mills teach mindfulness classes to their employees, and incorporate meditation into the workday.

Many people around the world -- Christian, Buddhist, Jewish, and atheist -- have begun to practice mindfulness simply as a way to live happier lives. (ABC news anchor Dan Harris suggests mindfulness can make you 10% Happier). In A Mindful Nation, Ohio Congressman Tim Ryan writes, "Mindfulness itself is not a religion. Practicing it does not require giving up religious faith, or adopting a 'foreign' faith, or becoming religious if you are not so inclined."

Does it HAVE to be a spiritual practice?
No.

Perhaps the following analogy will help:

Yoga originated as a practice in the Indian traditions that became part of Hinduism. You can go to yoga classes today that are very woo-woo, with chanting and om-ing, and an instructor who talks about finding your heart center and connecting to the ground of being and the divine within. Or you can go to a yoga class at your local gym where they make you use weights and do cardio intervals and play hip-hop music and you sweat and drip all over your mat during Down Dog.

Sometimes a workout is just a workout.

It will all work out.