The Washington Post reports that voter registration is down among Blacks and Hispanics, and could pose a "serious challenge" to the Obama campaign.

Unfortunately, it is the Washington Post's statistics that are seriously challenged.

The source of this information is the Census Bureau's Current Population Survey, also called the CPS. The CPS is a very reliable survey. The federal government uses the CPS to calculate the unemployment rate -- among many other important uses -- and expends considerable resources to ensure that it is accurate. The CPS has a huge sample size, an impressive response rate, and is meticulously scrutinized by the world's best survey researchers.

It would appear that I am leveling a very serious allegation that the CPS is flawed in disputing the Washington Post's reporting.

The CPS registration and voting statistics are reported from a limited number of questions asked on the CPS questionnaire in a November of an election year. These questions are very useful to those who are interested in elections because the CPS's large sample size allows fine-grained analysis of sub-populations, such as minorities or the disabled, which are simply not possible with typical smaller-sample election surveys.

To understand my contention that the Washington Post's analysis is flawed, I must explain how the voting and registration questions are asked.

The CPS asks a single person to report for all citizens age 18 and older living in a household if each person voted:

"In any election, some people are not able to vote because they are sick or busy or have some other reason, and others do not want to vote. Did (you/name) vote in the election held on ____?"

It is thus more appropriate to treat the three additional response categories of don't know, refuse to answer, and no response as missing responses since we do not really know if these respondents voted.

Table 1 reveals why many scholars and others have trusted the CPS as the best source for turnout rates. All surveys have what is known as "over-report bias," the difference between the turnout rate on the survey and the actual turnout. The official CPS turnout rate has an exceptionally small over-report bias when counting missing responses as "No."

Given this information, it is more plausible -- and simply common sense -- that the missing responses should be treated as truly missing data rather than being categorized as a "No" response.

Correcting the CPS by excluding missing responses to the registration question, rather than treating them as a "No," reveals the flaws in the Washington Post's voter registration analysis.

In Table 2, I report the Census Bureau's official registration rates by race. In Table 3, I report the corrected rates that exclude the missing responses. 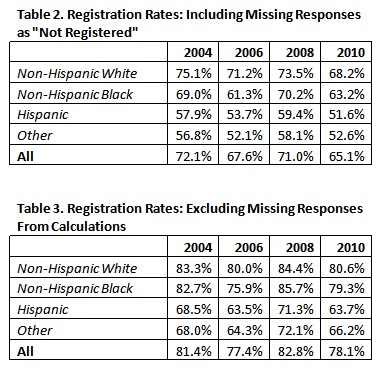 The patterns in Table 2 might indeed concern the Obama campaign. Registration rates for all groups are trending downward, particularly for Hispanics. But, what is really happening is that there are more missing responses. The corrected data show that Hispanics are registered at a statistically-indistinguishably slightly higher rate than 2006 and Blacks have experienced a significant registration increase.