Proving, as Pat Kiernan puts it, that "every story can be a local story in New York," The New York Post's front page Friday reads "Khadafy Killed By Yankee Fan: Gunman Had More Hits Than A-Rod." Of course, this also proves, yet again, that you can't always trust a New York Post headline.

It's not confirmed if said Yankees fan actually killed Moammar Gaddafi (in fact, there are reports now that Gaddafi was killed in crossfire between loyalist and NTC fighters), but, according to one version of the story, said Yankees fan did at least capture the Libyan dictator.

A fighter in Sirte has told the BBC his account of the reported capture. Mohammed [al-Bibi], a young fighter in his 20s, wearing a blue T-shirt and a New York Yankees baseball cap, said he had found the colonel hiding in a hole in the ground in the city of Sirte. He told the BBC that the former Libyan leader said to him simply: "Don't shoot."

Al-Bibi was then hoisted on the shoulders of his comrades, where he showed off a gold-plated pistol to photographers that he claimed to have stripped off the tyrant: 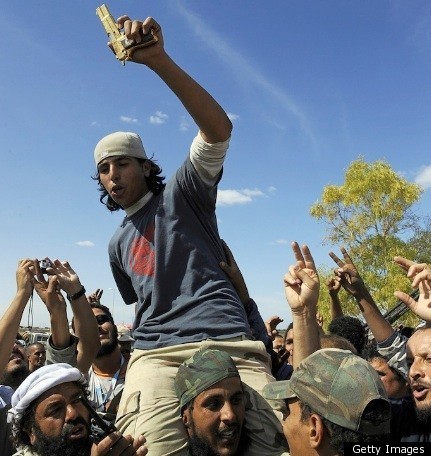 It's still unclear how Mohammed al-Bibi got the Yankees hat. It's possible, as The New York Daily News theorizes, that he received the cap from World Vision, a charity that sends unwanted sports paraphernalia off to countries where clothes are scarce and recipients don't care what sports team they end up sponsoring.

But after a disappointing season for the Bronx bombers, it seems New Yorkers might be eager to call al-Bibi their own, and take some responsibility for the death of a despot. They've also wasted no time in finding a way to make a Red Sox joke.

The boys over at Barstool Sports New York poke fun: "The BBC is reporting that Red Sox rebels were too busy eating fried chicken and drinking beer to kill the Libyan Leader."