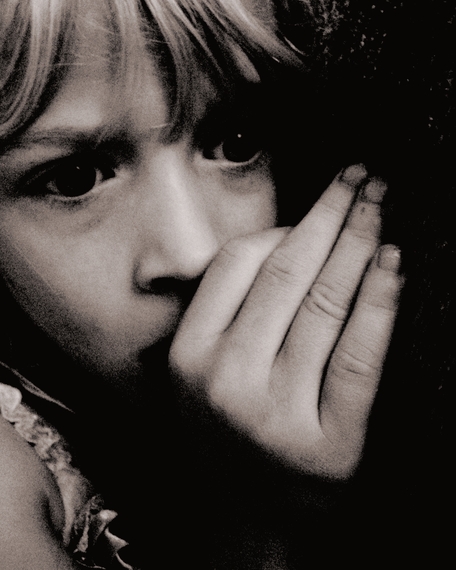 The words always came out as a whisper. Maybe I didn't want to wake my little brother, maybe because it was late in the night and that is just what people do, or maybe I was scared of the answer.

A few minutes before I nervously asked my question, I had been awakened by the sound of a low moan. Most children would conjure up ghosts in their closets or a monster under their bed, but I knew exactly what it was; I tiptoed past my sleeping brother,and hurried to my parents' room.

I lightly placed my hand on their door and slowly pushed it open, the fear rising in my chest. I would not step into their room. I had been warned in the past that I was not to go near her when this happened. I stood glued to my spot at their doorway, paralyzed. I watched their silhouettes, straining to make out my mother's face. My father was standing at the ready beside their bed, waiting and watching. The low moan was now accompanied by a terrifying sound, a harsh gasp. My mother was violently thrashing around and stomping her feet.

She couldn't breathe. A muscle spasm shut off the entry to her lungs.

My mother is a polio survivor. When several parents in her small community on the edge of the Catskills lost their elementary school aged sons and daughters to the Polio Epidemic of the early '50s, my mother survived.

Unlike the temporary conditions of a cold or a flu, the disastrous paralytic effects on the body from polio are forever. The virus is permanently in her system.

"Polio was a plague. One day you had a headache and an hour later you were paralyzed. How far the virus crept up your spine determined whether you could walk afterward or even breathe. Parents waited fearfully every summer to see if it would strike. One case turned up and then another. The count began to climb. The city closed the swimming pools and we all stayed home, cooped indoors, shunning other children. Summer seemed like winter then." Richard Rhodes, A Hole in the World

My mother has paralysis of the upper left of her body: neck, throat, chest, diaphragm, shoulder, and arm. She gags when phlegm or saliva gets lodged on the "wrong" side of her throat. She gets winded easily because her left lung is atrophied slightly shifting the organs near her lung. She is diligent about staying healthy and avoiding sickness because a chest cold or a stomach flu could strangle her.

And, I worry she won't start breathing again.

Now, imagine if medical researcher, Jonas Salk, the man credited for the vaccine that brought a halt to the polio epidemic, created it a few years earlier and my mother's parents had the option of having her vaccinated?

I enjoy researching. I am an introvert -- researching is in my nature. When it comes to decisions, nothing is spontaneous. My stance on social, religious, and political issues is developed after hours, days, years of reading nonpartisan facts and unbiased figures.

But, my advocacy for vaccines is pure passion.

I could throw statistics at you and quote publications and organizations, like the U.S. Department of Health and Human Services, Health Resources and Services Administration:

"The United States has the safest, most effective vaccine supply in history. In the majority of cases, vaccines cause no side effects, however they can occur, as with any medication -- but most are mild. Very rarely, people experience more serious side effects, like allergic reactions."

The truth is I could not in good conscience let my children "survive" a debilitating virus when I knew I could have prevented it.

And I am not just talking about polio.

There was a man that was a member of our church growing up that was nuts. He was certifiably nuts, a result of contracting mumps as an adult. His wife did her best to care for him and keep him from hurting himself and others, but it became too much as they got older and he was eventually institutionalized.

Anti-vaxxers point out how measles was a storyline in '60s and '70s TV shows, like The Brady Bunch and The Flintstones, with comical dialogue and a laugh track. What the fictional episodes did not tell you about were the less than humorous permanent effects on the body: hearing loss and brain damage. Sure, brain damage only occurs in 1 out of a 1,000 children, it's no big deal, but hearing loss affects 1 out of 10 -- that's a big deal.

Heck, if it hadn't been for tuberculosis -- referred to as the Forgotten Plague which, by the beginning of the 19th century, killed one in seven of all people who had ever lived in the U.S. -- my husband's parents would have never met. The Adirondack Cottage Sanitarium in Saranac Lake founded the first nursing program specifically targeted for the care of TB patients -- and where my husband's mother, a nurse, and his father, a cook, found true love amongst the death and disease.

Luckily, there are vaccines that prevent these viruses, and many others, from destroying our children. Vaccines that keep our families safe and intact. So no parent has to worry about whether their child will die, or worse, be permanently disabled by a preventable disease.

And no scared little girl will wonder if Mommy will start breathing again.

More:
measleshealthy livingplague tuberculosisviruses
Newsletter Sign Up
The essential guide to taking care of your mind and body
Subscribe to HuffPost’s wellness email
Successfully Subscribed!
Wellness delivered to your inbox