Social contagion is all the news. Studies show that kindness, anger and even obesity are 'catching' between friends and associates. Do money matters work the same way? 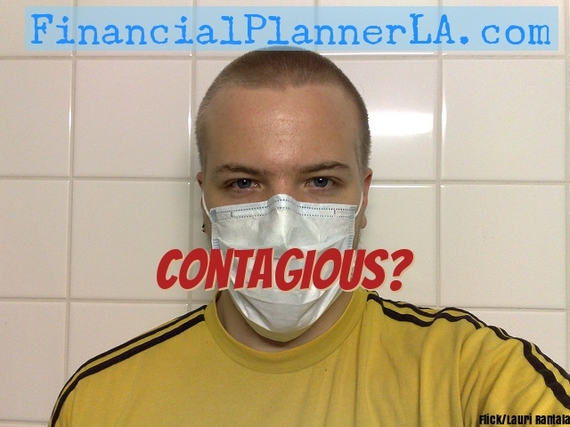 Have you ever compared yourself financially to what (you think) is going on with your friends, loved ones, or coworkers? I've just finished reading Contagious by Jonah Berger, a terrific book that talks about why things catch on in our media-saturated society. Berger brings up some excellent points that also apply to how folks handle their finances.

When people come to me to help them design a financial plan, I help them with smart financial strategies to help reach those goals faster and easier. I don't really think they're catching financial acumen from me, as it happens. Instead, I hope they can learn from me to not let their background and peer group derail them from making smart financial decisions with their own hopes, dreams, and goals in mind.

Who you spend time with, who raised you, and where you work can all affect your attitudes and actions about money. I don't just mean good or bad financial decisions, but what choices you make as to where to live, what car to drive, and what to do with your leisure time (if you even have leisure time).

So, inspired by Contagious, let's take a look:

Social Proof - This one has a strong draw on many people. If all your friends have shelled out $100,000 for a top of the line BMW, then it's normal to want to have one, right? Personally, I'm not here to debate the "value" of a BMW, but even if I can "afford" it, no way I'm shelling out that much on a car at this point. For me, that money is much better spent elsewhere. While a fabulous ride is an extreme example, for others it may come down to whether to fork over extra money on special rims or upgraded seats. Are you doing it because you really want these things, or because all your friends are doing it?

Visibility - What's more exciting, buying that $160,000 car and watching restaurant valets hyperventilate in admiration or putting away $160,000 for some financial goal? There isn't a right or wrong answer here but which of these two options are more likely to be noticed by the people around you? While others see your new wheels parked in front of your house, they don't generally don't get a gander at your net worth statement. So when it comes to status, the car wins every time, hands down.

But the catch is that with visibility, many "bad" financial decisions will generate positive reinforcement from those around you. In contrast, good financial decisions will, and should, go unnoticed by your friends. Looks are deceiving. That friend who just financed his luxurious new BMW may, in reality, be up to his ears in debt. (If he happens to not have stellar credit, his interest rate may also be sky high.) While you pull up in your more affordable car looking "poor" - and hey, everything's relative, who's actually going to say you look poverty stricken if you bought your car for the low low bargain basement price of 50 grand instead? - your money is hopefully stashed away somewhere it is appreciating in value.

Psychology of Imitation - There's 'monkey see, monkey do' which all too often turns into 'money see, money do' (which for big spenders then devolves into 'money see, money due' but I digress). We often get sucked into the habits of the people around us. In Contagious, Berger contends, "People are more likely to vote is their spouse votes, more likely to quit smoking if their friends quit, and more likely to get fat if their friends become obese. Whether making trivial choices like what brand of coffee to buy . . . people tend to conform to what others are doing."

On a positive note, I think many people take the initial steps to get their financial houses in order after hearing about their friend starting the process. Once a couple people in a group get excited about getting their financial roadmaps they often talk about their progress to all their friends. Some cotton to the idea of a financial planner doing the heavy lifting, which help people get over the tendency to procrastinate, and make the first steps right away. Others take a little longer and reach out for guidance after hearing repeatedly from five or six friends about how excited they are to be working with a Fiduciary Financial Planner. I'm always curious how many of my Advocate Magazine Columns, Huffington Post Blog, or TV appearance have to see before they reach out and give me a call or drop me an email? Some read one, and I'm sure some read 20. The important this is to keep improving, and to get moving as soon as possible. Better late than never right?

Power of Observability - Not all problems are created equally. My very successful friend, let's call him Joe Amasoft, sold his tech startup and bought a lot in the Hollywood Hills. He hired an A-list celebrity architect and proceeded to build his dream home, top of the line everything. Every amenity you didn't even know you needed was included, like separate cellars for red and white wine, for example. He loved the house and hosted a bunch of parties to share his excitement with his friends.

The place was even photographed and featured in the Architectural Digest. But this is where Joe's love affair with the house began to deteriorate. Sure, it was amazing, and Joe had arguably the nicest house among his extended social group. But suddenly, after it was featured in A.D., his dream home was now playing in the big leagues, which meant that his was not necessarily the clear winner as the nicest, or most expensive, digs in the issue.

Joe caught the bug that 'more is more', a soul destroying treadmill at best. He learned the hard way that not only bigger isn't necessarily better but better may not necessarily be better either.

The Bottom Line
You probably heard, "If all your friends jumped off a cliff, would you?" enough from your parents growing up, right? Well now you're going to hear it from me. Do what is right for you. An affordable mortgage for your friend has nothing to do with what makes sense for you, your financial situation or your goals.

Unfortunately, many of the trappings of wealth, cars, clothing, travel, Instagram photos, or glamorous snaps have no real value when it actually comes to feeling secure financially. Chasing down the Joneses, or, even worse, trying to beat the Joneses is a great way to never be happy or in good financial shape.

That means you'll want to be careful of which of your friends you look to a financial role models. The one thing I've learned about $160,000 cars is that they're not just capable of accelerating you over the proverbial financial cliff, they can drive you there even faster.

Until next time and as always Be Fiscally Fabulous, and remember Your Money Matters. 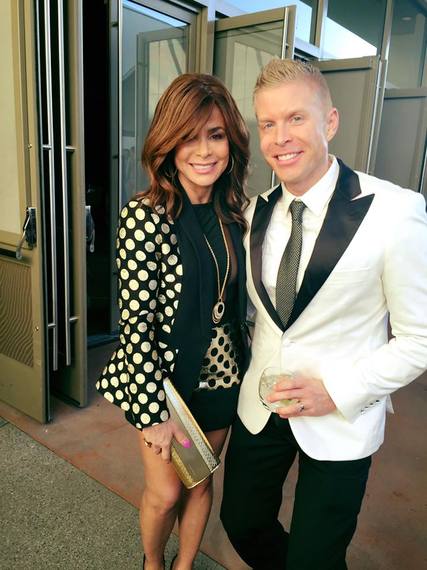 DAVID RAE, CFP®, AIF® is a Los Angeles-based Wealth Manger with Trilogy Financial Services. He has been helping friends of the LGBT Community reach their financial goals for over a decade. He regularly writes for the Advocate Magazine, Huffington Post, as well as his Financial Planner LA Blog.

Securities and advisory services offered through National Planning Corporation (NPC), Member FINRA,SIPC, a Registered Investment Advisor. Trilogy Capital Trilogy Financial and NPC are separate and unrelated entities. The opinions voiced in this article are for general information only and do not constitute an endorsement by NPC.