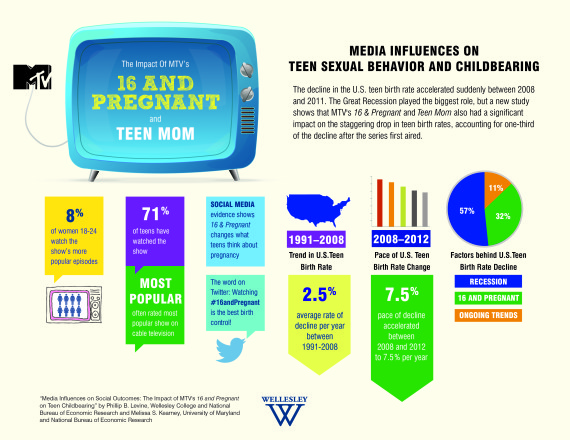 Media images of violence and sex are often blamed for negative social attitudes and behaviors, but pinning down its actual impact is notoriously difficult. Do these images in TV and movies actually foster and encourage antisocial behavior or merely reflect what is observed in real life? Enter MTV's reality TV show, 16 and Pregnant, into the debate. This popular show has been simultaneously blamed for "glamorizing" teen childbearing by making stars out of teen moms and credited with discouraging teen childbearing by educating teens about the reality of teen motherhood.

We took advantage of the introduction of 16 and Pregnant to assess the influence of media images on teen behavior -- specifically teen childbearing. Each episode of the show follows a five- to seven-month period in the life of a teenager as she "navigates the bumpy terrain of adolescence, growing pains, rebellion, and coming of age; all while dealing with being pregnant," according to MTV. Its success led to multiple spinoff series under the Teen Mom label that follow some of these young mothers' lives subsequently. Could exposure to the images and stories in 16 and Pregnant and Teen Mom affect how teens think about pregnancy and ultimately on whether they become teen mothers themselves? Yes, in fact, our research shows that it does and that its impact is significant.

In a newly-released academic paper, we find notable evidence that the introduction of MTV's 16 and Pregnant is responsible for a significant portion of the reduction in the teen birth rate in recent years. Our results indicates that it led to a 5.7 percent decline in teen births in the 18 months after June 2009 (when 16 and Pregnant first aired), accounting for about one-third of the overall decline in U.S. teen births over that period.

Of course, teen childbearing rates have been falling in the United States for some time: between 1991 and 2008, it fell at an annual average rate of 2.5 percent. But the pace of the decline accelerated between 2008 and 2012 to 7.5 percent per year. Since teen abortions also were falling over this period, this rapid recent reduction is likely due to fewer pregnancies. Although the recession can explain the largest share of the "excess" rate of decline in teen births, a substantial portion can be attributed to the MTV franchise.

To determine the impact of 16 and Pregnant, we look to see whether greater reductions in teen birth rates occurred in locations where more young people watch the show. We adjust for the fact that areas where ratings are higher might be different in terms of the level of teen childbearing rates and their trends. First, we focus on changes in birth rates after the introduction of the show. That eliminates the potential problem that places where teen births are highest are the same places where the audience is largest. Second, higher viewer interest in the show might reflect conditions related to trends in teen births. To correct for this, we focus on the overall popularity of the MTV network across TV markets before the show began. When the programming changed, was there a larger effect in those locations where more people were already watching MTV? These approaches allow us to conclude that our results capture the causal impact of the show on teen birth rates.

Further, we use data from Google Trends and Twitter to explore the influence of the show on teenage attitudes. Twitter data reveals thousands of examples of relevant specific tweets: for instance, "Watching 16 and pregnant reminds me to take my birth control" and "16 & Pregnant is a great form of birth control. These girls go through hell and hot water while (some) guys get away scar free. I'LL PASS!" When a new show airs, the number of Google searches and tweets that include the words "16 and pregnant" skyrocket. More interestingly, when searches and tweets about the show spike, we also observe corresponding spikes in Google searches for "how to get birth control pills" and tweets containing "birth control" and "abortion." We also see an increase in searches and tweets about birth control and abortion in those locations where the 16 and Pregnant is more popular after the show began. We therefore conclude that exposure to the show increases interest among teens in birth control and abortion.

Our findings suggest that MTV's 16 and Pregnant franchise connected with teens who were at risk of teen childbearing, presenting stories that led them to change their behavior. In previous work, we have argued that limited economic opportunities for economically disadvantaged young women are responsible for the high rates of teen childbearing in the United States. We reasoned that teens see the immediate benefits of a baby -- someone to love and care for -- but face limited long-run costs. Many will therefore "choose" to become teen moms.

But 16 and Pregnant appears to make immediate costs palpable to potential teen moms. The show's stories resonate with teens, highlighting the realities of relationship stress, unsupportive boyfriends, restricted social lives, friends that move on and relentless sleep deprivation, among other challenges. The show makes real what some would-be teen moms might otherwise fail to see -- that becoming a mom is not a way out but brings its own hardships and struggles. In that, the show may represent a highly effective form of sex education and, as reflected in the twitterverse, a great method of birth control.