When we brought Casey home from the pound 11 years ago, he looked so woebegone that we learned the word lugubrious. Occasionally I caught him wagging his tail and reinforced the behavior with, "Good tail, good tail!" 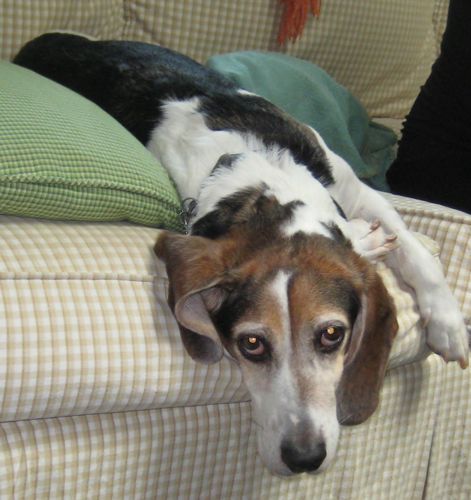 I never gave much thought to whether my passive, yet eager-to-please, beagle-ish guy suffered from boredom. But now I'm worried.

It started when I returned from a trip and noticed him pawing to get at something under the the sofa. Upon closer inspection I discovered a few impossible-to-reach kibbles.

The dogsitter told me, "Oh, I planted those so he wouldn't be bored." The kibbles seemed to frustrate him, so I removed them. But now that it's been pointed out to me, I can't stop thinking how bored Casey looks, except when--like every other dog in America--he flies around in circles, howling, as the mailperson rounds the corner onto our block.

Since boredom is said to inspire creativity, Casey could be a composite of Grandma Moses, the guy who invented PostIts and Mavin Hamlisch, if only he had opposable thumbs. Which is not to say that Casey hasn't experienced excitement beyond the quotidian mail delivery, excitement such as encounters with a squirrel in our house, a deer in our yard, and a ring of senior citizens during his one gig as a therapy dog.

And let's call it negative excitement the time he got his head stuck in an empty bag of dog food that created an air pocket in his stomach, which I thought was a tumor, and required both of us to sit and shake all day at the vet's and required me to pay more than it costs for a weekend in Atlantic City.

These four adventures have provided my Sweet Potato with an increased heart rate an average of once every two and two-thirds years, not including when we have company for dinner and he melts into the rug under the table, acting like he's not paying a whit of attention, until someone takes one step away from her plate. Faster than you can say Jeepers!, Casey whoomps an entire chicken breast into his mouth.

As for interaction with other dogs, Casey is anti-social. But he can do tricks. "Come!" challenges him, yet he scoots to my side in a jiffy at the "Come for a treat!" command (hence his nickname, Scooter Libby). And since he routinely remains motionless, he excels at the "full face or profile" command. On the other hand, he thinks "Fetch!" means watch Mommy throw a ball and yell "Fetch!" 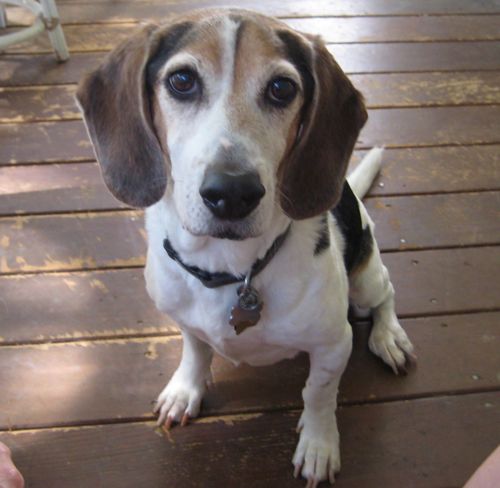 Am I projecting my own fear of boredom onto my hairy best friend? At the very least I must own up to my role in Casey's perceived ennui. Thrice a day I walk him across the street. A better master would take him around the block. In my defense, while whippets and puggles are trotting around the neighborhood, my Melonball is home getting smushed with hugs.

In the same way I sometimes "try on" other people's lives to see how they fit, I "try on" other people's dogs. My friend Francesca has two labradoodles. They're always flopping around in tandem, up and down stairs, in and out the doggie door, on and off Francesca's lap. It wears me out to be around them, but I envy the jovial ambience they provide.

Then I return home to my mellow fellow, the living creature with whom I have probably shared the most hours of my life, and I go all tranquil. Even when he smells bad, Casey smells scrumptious to me, the way my babies always appealed to my olfactory sense, no matter what. And maybe that is part of the point. Loving your dog, even when he's an old man, can feel so much like loving your baby. At bedtime he cradles in my arms like a newborn and I rub his tummy before we drift off to sleep. 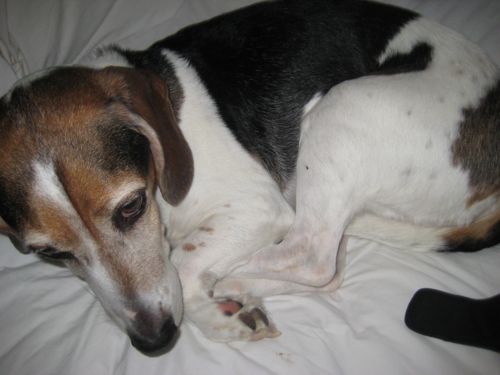 Though Casey's eyes are frequently closed, when they're open, they follow my every move. He knows when I leave a room and always comes with me to the bedroom, my office, the porch and, yes, the bathroom where, if you must know, he works his head between my knees for me to scratch behind his ears. Other than eating and yowling when the mail arrives, this is the best part of his day and, in a way, mine too. Maybe he isn't so bored after all.

I'd love to know how you entertain your dog.

Read more about Casey and other worries on my blog, Confessions of a Worrywart