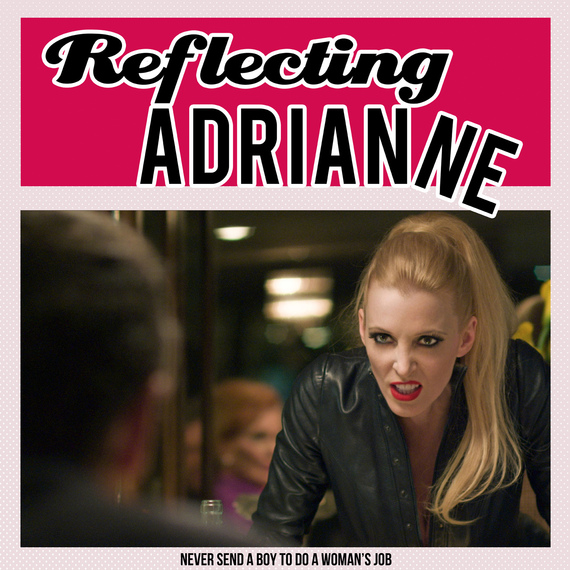 It has been said that when we create art we create it in the image of ourselves. My new short film Reflecting Adrianne is deeply personal to me, which is weird, because I'm wouldn't describe myself as transgender, I didn't write it and it isn't about me. But I did direct it. Which, I have learned, means that it is my artwork and therefor, ultimately all about me. Me and a a boy named Adrian who I still struggle to understand. He's straight, unsexy and styleless. He's the exact opposite of me. Except that we share so many of the same fantasies about what we look like on the inside.

I didn't set out to make a transgender film. Nor did I set out to make film noir. I had never even heard of neo noir before Ree Merrill, who wrote & stars in Reflecting Adrianne told me about the L.A. Neo Noir Festival, where we just won the Maverick Award. I know what a maverick is because Madonna had a record label in the 90s called Maverick which released Erotica. There's a lot of Erotica Madonna in Adrian's alter ego Adrianne. There's also a lot of Michelle Pfeiffer's Catwoman, Disney's Evil Queens Maleficent and the one from Snow White, Jessica Rabbit, Pam Anderson, Farrah Fawcett, Bo Derek, Cheryl Tiegs, Heather Locklear & Lynda Carter's Wonder Woman with just a dash of the Wicked Wicked Witch of the West in her. (Isnt there a little WWOTW in all of us?) She's equal parts straight porn fetish girl and gay campfest. Kind of like the inside of me.

When I was a boy I would take off my imaginary glasses and pull an imaginary pin out from my imaginary bun and let down my imaginary hair and I'd spin until a flash of light would appear. When I stopped spinning my fists were on my hips in the Wonder Woman stance, resting confidently on my perfect waist, in my gold belt with my magic lasso, bulletproof bracelets, tiara and heels in place. It's just that nobody but me could see it, thanks to a secret spot I would touch on my belt which would render my transformation invisible to everyone but me. Nobody but Adrian can see Adrianne, the woman in the mirror. Not when she cooed sweet promises to him as a boy and not when she makes him second guess himself every second of every day as an adult.

Adrian tries to create beauty, peace and self-confidence using accoutrements sold to women with the promise of empowerment and desirability. I have dedicated much of my life to understanding beauty and an industry which sells products which promise it. After over 25 years of exploring the subject I have complicated thoughts on the subject. Adrian and I have both sincerely found comfort, confidence and conflict in feminine beauty and the role it plays in our lives. I'm not sure if Adrianne is Adrian's female self trying to get out or if she's my conscious talking to me about the industry I've chosen. Miriam-Webster defines transgender as: of, relating to, or being a person who identifies with or expresses a gender identity that differs from the one which corresponds to the person's sex at birth.

I was born male, and I am happy with my anatomy, but my spirit is genderless. I believe the same holds true for all of us and that the repression of the spirit leads to trouble. I work hard to push past fear to let my true colors shine. Adrian? Not so much. And you'll see in this short film how that works out for him. And for her.

I hope it is entertaining, relatable food for thought.

"Reflecting Adrianne" is available on Vimeo on Demand.