My students got very excited about the idea of Anonymous releasing the list of politicians who are allegedly secret members of the Ku Klux Klan. I was shocked to learn that my U.S. Senator, Johnny Isakson, made the list. Could the legislator, one of the most respected members of the Senate and the state of Georgia, be a secret Klansman?

Part of the reason my students are interested in Anonymous and the Klan is because several of them are reading a chapter of the best-selling book Freakonomics about a famous case where the Klan was exposed. Titled "How is the Ku Klux Klan like a group of real-estate agents," the chapter documents how William Stetson Kennedy infiltrated the Klan, and then published all of their secrets in the book "The Klan Unmasked."

Sounds likes history repeating itself? Perhaps too much.

Stephen J. Dubner and Steven D. Leavitt, the Freakonomics book authors, dug a little deeper and found a few details. Kennedy, the hero of the story, may have oversold his role in exposing the Klan. He didn't lie so much as perhaps stretch the truth about whether he was the infiltrator, or more of a reporter and one who relied on other sources for his book.

Now we've learned that the "hacktivist" group Anonymous released some data about secret Klansmen, allegedly from a hacked KKK account. Could Georgia Senator Johnny Isakson, one of four Senators named, be a closet Klansman? 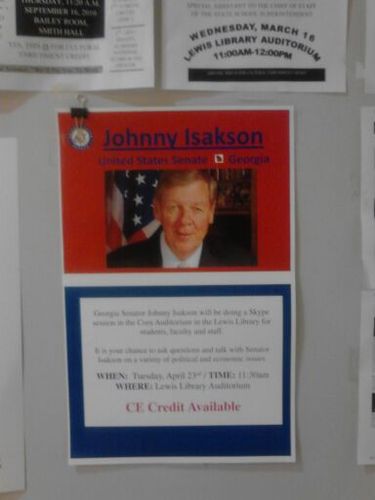 It's hard for me to agree with that assessment. He was very professional in meeting with our students in a skype session not long ago. Colleagues who met him have been impressed. Isakson has carefully crafted a message of a relative moderate, open even to working with President Obama behind the scenes. He's hardly one who taps into some undesirable language and name-calling that has unfortunately become part of American political discourse today. So I doubt that the group who named him got it right.

"Johnny Isakson is not a Klansman--at least, not the Johnny Isakson I know. I have known the U.S. senator, who was once a Democrat, since he served in the Georgia statehouse. Back in 1996, as a Republican, he lost his first primary race for the Senate to a conservative firebrand, billionaire evangelical in a landslide. Georgians said he was "too liberal" for their tastes. While his current politics leave much to be desired and I am increasingly uncomfortable with his slide to the right, there is one thing that I know for sure: Isakson is not a bigot....
Now, I would normally applaud a campaign like #HoodsOff, but we've been here before. Anonymous hasn't always been right and there is an inherent danger in releasing false accusations into the wild."

And that goes for the others accused, including Senator John Cornyn. An article about him titled "My Senator the KKK Member" has already been pulled by Daily Kos. In the old days, we used the adage "trust, but verify." Verification is the key, but at this point, I wouldn't trust it without a lot more convincing evidence. Otherwise, it will be those exposing the data, rather than the targets, who will have trust issues with the people.