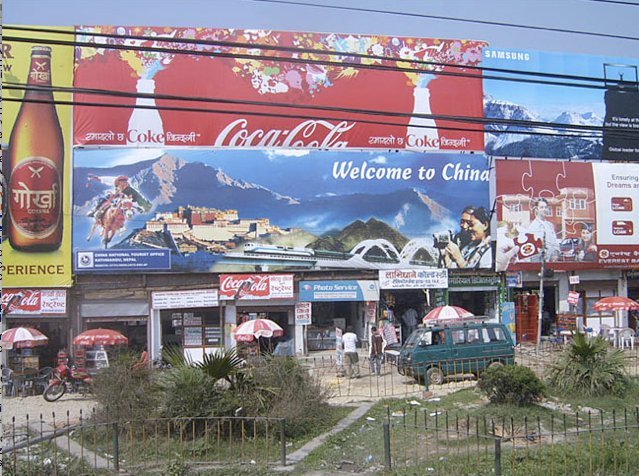 The sign that greets visitors as they leave Kathmandu airport. Photo: Tenzing Jigme

On October 3rd, police in full riot gear confiscated ballot boxes in Kathmandu and effectively shut down an attempt by 9,000 Tibetans to participate in the vote for their new Prime Minister and Parliament-in-Exile. A number of sources including the Unrepresented Nations and Peoples Organization (UNPO) suggest that Nepal's actions were carried out at the bidding of Beijing.

"People felt desperate. Many of the Tibetan elders in the community were crying, they were not able to do anything as there were so many police and they were so aggressive," a Tibetan eyewitness told the International Campaign for Tibet.

In contrast, in Dharamsala, India -- the seat of the exiled Tibetan government -- Indian police stood on guard in a protective capacity for the thousands of Tibetans going to cast their votes.

This was the first time that Nepal has interfered with a Tibetan election, but it is only the latest in a series of moves that suggest the Nepalese government is willing to act as the hand of Beijing's tightening grip on its internal affairs. It is Chinese, not Nepali soldiers who patrol Nepal's borders, up to 50 km inside the country. To many observers, Nepal is looking increasingly like China's client state. Dr. John Powers, professor of Asian Studies and Histories at Australian National University, goes even further, suggesting that the country is on its way to effectively becoming a Chinese province.

In recent years, Tibetans have been creating a fledgling democracy in exile. Tibet had traditionally operated under a theocracy, but after coming to India in 1959 the young Dalai Lama made it a priority to create a democratic exile government.

The Tibetan parliament has held free elections since the 1960's and since 2001, there have been elections held every four years for the position of head of the cabinet, or prime minister. Sunday's election was causing particular excitement among the young Tibetan exiles who were presented with a greater choice of candidates and a more transparent and comprehensive election process than in previous years.

AFP reported that Kathmandu police chief Ramesh Kharel had confirmed the seizure of ballot boxes explaining that the action was done to prevent an "illegal vote."

Nepal's Home Ministry spokesman Jaya Mukunda Khanal had explained Sunday's action by stating that, "Nepal's foreign policy does not allow any activities against any friendly neighboring countries," according to CNN International.

Khanal denied that the Ministry had operated under instructions from the Chinese government. However, China recently announced payment to Nepal's Ministry of Home Affairs of $1.47 million annually to curb "anti-China activities" on its soil.

It appears from contact with Human Rights groups in Nepal that tacit agreement had been given by Nepali authorities for the election to go ahead, and that the intervention came as a shock to the Tibetans involved. Thinley Gyatso, the regional Tibetan election commissioner in Nepal, said that authorities had given him permission to conduct the vote and that he is pressing the Nepalese government to return the ballot boxes.

In his blog, Mikel Dunham, who has been researching Nepal's politics for over a decade wrote, "Apparently, all China has to do to get its way in Nepal these days is to speed-dial Nepal's Home Minister Bhim Rawal."

Referring to how Nepal has failed nine times in the past two months to elect a prime minister, Dunham comments; "The irony here is that, while Nepal's government can't conduct a successful election for its own prime ministry, the Tibetans, who conducted a quiet and orderly election, will certainly result in the naming of a new Tibetan prime minister -- with or without the ballot boxes absconded by the Nepali government at the behest of Beijing."

On Tuesday, Marino Busdachin, the General Secretary of UNPO strongly condemned interference by Nepali authorities on the election, calling the Tibetan democratic process "one of the strongest in the world refugee communities." Busdachin stated that such an action damages Nepal's reputation. As a sovereign democratic nation, he said, Nepal "must not allow itself to be swayed by Beijing's influence" and called upon the Nepalese authorities "to immediately release the confiscated ballot boxes in an un-tampered state and to permit the counting of ballots in a free and fair manner by concerned Tibetans."

UNPO also urged the Nepalese government to implement the recommendations from UN treaty bodies to improve the situation of the country's approximately 20,000 Tibetan refugees who cannot own property or apply for citizenship.

For Tibetans in Nepal, business ownership, licenses and most legal transactions, including documentation of births, marriages, and deaths, must be accomplished through the auspices of an intermediary for an exorbitant fee. Says Dunham, "In the current climate, this makes refugees very vulnerable to criminals, thugs and the Maoists' dreaded Youth Communist League, all of whom make it a practice of extorting money from Tibetans. Violent attacks and threats of violence are a daily working reality for Tibetans stranded in Nepal."

Says Dunham, "I think you will see Nepal playing a more and more important role in the Tibetan question, as well as in the power-dance between China and India."