Is Isaac Newton's Principia out of date now? originally appeared on Quora - the knowledge sharing network where compelling questions are answered by people with unique insights.

Answer by Paul Mainwood, Ph.D. in physics, on Quora:

I would love to know how many people in the world today have actually read Newton's Principia. They don't have to have read it in the original Latin, just a decent translation into English or their own native language. But they do have to have read it all the way through.

I'd be surprised if the answer was more than a few hundred. This isn't for lack of access. There's a free online version in English that anyone can browse to their heart's content.

I certainly haven't read it all, despite the fact that I spent several years studying the history and philosophy of physics at a postgraduate level, and have written a paper on the interpretation of philosophical arguments that Newton employs. I've read bits of it, but not the whole thing. I tried, and I failed. It's too obscure, too dense, too idiosyncratic.

Newton's Principia is hideously out of date, and it bears no relation to how physics is done by anyone today, or for the last couple of hundred years. It's not even clear that it bears much relation to how Newton did physics.

For a start, the book involves no calculus. When Newton wrote Principia, he was still somewhat secretive about his "method of fluxions," so he translated his arguments into the "geometrical style." Given that many of the problems he addresses are much more easily framed in terms of calculus, this makes his geometrical arguments almost willfully obscure. In many cases, you can see through the mess of lines and curves he creates to the simpler calculus approach he was actually following. In other cases, his methods are just baffling.

It's probably easier to display one of the pages than to argue this in the abstract. 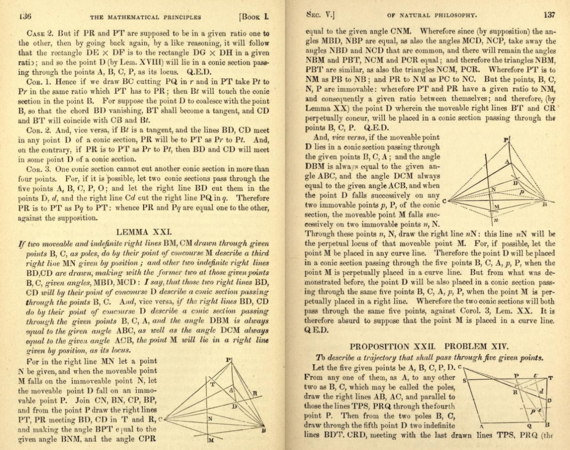 Second, Newton's topics make no sense at all today. They were chosen to suit the particular issues that he wished to address in 1687.

None of this bears much resemblance to how Newtonian mechanics is introduced, taught, and used today.

The laws of motion that Newton first clearly stated and wielded in Principia are of course still relevant. They are used in a surprisingly large amount of contemporary physics, and in the vast majority of engineering and technical work done today. But they are not used in the way Newton used them. Even at an introductory level, the laws are stated and applied within a larger framework that Newton never appealed to (a framework that, ironically, owes much to Descartes and Leibniz). For more advanced work, they are reformulated according to a series of innovations that were constructed in the 18th and 19th centuries, principally through the work of Lagrange and Hamilton.

But the actual work itself? Newton's Philosophiae Naturalis Principia Mathematica was out of date almost as soon as Newton wrote it.

This question originally appeared on Quora. Ask a question, get a great answer. Learn from experts and access insider knowledge. You can follow Quora on Twitter, Facebook, and Google+. More questions:
Download
Calling all HuffPost superfans!
Sign up for membership to become a founding member and help shape HuffPost's next chapter
Join HuffPost