People, in a move designed to broaden their appeal, decided that this year they would expand the Sexiest Man title to include men who did things for a living other than work at being sexy. It's a noble effort, and in the sexy teacher department, it brought us this guy. 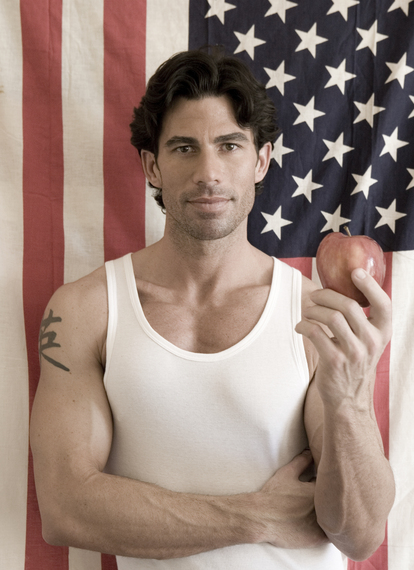 Meet Nicholas Ferroni. Actually, you may already know him. He has over 22,000 twitter followers, no doubt influenced by the Rays of Hunkness that he is able to transmit over the internet. Ferroni has also done some acting and has won some other notables (one of the Most Influential People and Fittest Men in the World). He has a degree from Rutgers, and he also writes. In fact HuffPost, which carries his stuff from time to time, invited him to ruminate of the State of Being Most Sexy, but he's too self-effacing to do it. He invited me to write about the honor for him, which tells you that on top of everything else, he has a sense of humor.

But now that you've seen that, let me invite you to watch this

Is it cringeworthy that Viera's audience applauds Ferroni as if he's a big sexy object? Maybe, but he's a big boy and says that as a performer, he's been there, done that: "It is always surreal, and, to be honest, once they heard 'sexiest,' they would have cheered for anyone who walked out that door."

No, I find it much more cringeworthy that in his brave and direct challenge to major sports figures, he says, more than once, that he is "just a teacher." But I get it. All too often teachers feel the urge to softpeddle our work. And the culture reinforces that reluctance to speak out. Particularly in these days of big-time teacher blaming, we aren't supposed to act like we're anything special.

Ferroni knows better. I asked him for his 'How I Became a Teacher' story:

"As a child, I wanted to be an adventurer, superhero, actor, comedian, philanthropist, philosopher and psychologist... So I became a teacher."

He teaches high school history, and if you work in a high school you know that there almost nothing that students like less. To be able to sell history to teenagers is a huge gift. But he does more than that. Ferroni is a voice for healthy lifestyles. He is an active voice for the rights of LGBT students, believing that it's important their teachers, particularly their straight teachers, stand up for them. He's been in front of the camera many times to speak out for these issues, and he has been in his classroom day after day trying to bridge history and modern media to educate his students (I want to see his lesson on the Declaration of Independence as one of history's great breakup letters.)

And what gets him national attention? Being freakishly well-built and handsome.

I've only had a couple of exchanges with him on this subject and he seems, well, a little embarrassed. This is not uncommon in teachers who have been given some sort of award, and I'm pretty sure that's because as a teacher you know many other teachers who are working just as hard (if not harder) and teaching just as well (if not better) as you are. It's reverse survivor's guilt. It could have happened to anyone -- why me?

But what can you do? If you believe (as most of us do) that teachers ought to get to be famous and recognized and nationally known as least as well as guys who chase bags of air across fields of plastic grass, and if it turns out you're being given the chance to be a Famous Teacher, even for fifteen minutes, then for all the rest of us, you have to say yes.

And then, while you have the spotlight, you use it. Ferroni's done that, saying repeatedly that "a thousand other educators are far more deserving" and using his small soapbox to advocate for the arts in education and to speak out against toxic testing.

It's a sad commentary on the culture that because Nicholas Ferroni has washboard abs and smoldering soap opera eyes, he gets the audience that some deserving schlubby middle-aged teacher does not. It's a further irony that if Ferroni were that schlubby guy, he would still deserve an audience, and he wouldn't get one. It is frankly frustrating that in the ongoing debate over the future of public education, teacher voices are so rarely allowed to join. In the last ten months, cable news booked 185 guests to talk about education-- only 17 of them were teachers.

But we live in a country where fame is one odd roll of the dice away, and if you win the jackpot you need to spend it wisely. If you're famous you can try to fix world hunger or you can bare your shiny butt.

So God bless you, Nicholas Ferroni, and your impossibly bright smile and your sculpted abs and your just-messy-enough hair. If you are willing to use the national platform to talk about things that actually matter in the teaching world, then I'm not that concerned about how you got there. America needs more famous teachers. I wish they could be famous for being good teachers, but if a good teacher can become famous for being America's sexiest, I guess that will have to be a start.