It still feels like yesterday when we watched videos of women who had made it in various industries. The one thing that caught my attention as these women were telling their stories was the fact that they had all advocated for feminism in their own way. After that, we broke into groups and got into conversations on what we learnt from those videos.

We talked and talked and then someone asked a question, "Do you think Nicki Minaj advocates for feminism?" Not in these exact words, but that is how I remember it. Of course, sitting in a room with 29 other girls from 8 other countries, you are bound to get tons of opinions on that question.

Definitely, we got numerous definitions of feminism, but I will stick with just two. Some say it as a range of movements and ideologies that share a common goal: define, establish and achieve equal political and social rights for women and some, a movement that allows women to do what they want without restrictions as long as it brings positive value to society. Now, let me rephrase the question "What kind of actions can be seen as acts of feminism?"

You could say yes because she basically does what she wants without being castigated for it, be it the way she talks or dresses or raps. Rapping used to be considered a thing for men in the past, but today, Nicki holds numerous awards for her rapping skills, she fought her way to the top. She had to be able to rap before she was picked up by Lil Wayne and signed to Young Money/Cash Money Entertainment. She has shown us that women can also excel in things that were thought only for men. And now she can dress how she likes, eat whatever she wants to eat, invest in any project she wants to invest in, earn the same amount of money as other men in her industry or more and still be a woman who empowers young girls and older women. So who says she's not a feminist?

Then again, some say she doesn't act like a feminist because she's engaged in the kind of music that is not considered positive to society, or the way she dresses is rather obscene. But what do you call positive? Because if I am thinking right, Nicki's manner of doing things has given some girls around the world courage, maybe not to do exactly what she does, but courage to do something that society has restricted them from doing as a result of stereotypes. It's like the story of Kathrine Switzer, the first woman to complete the Boston marathon. I'm not saying Nicki was her inspiration, but she was a courageous woman, who stepped out of the ordinary to do something that no woman had done before. So tell me, isn't that courage positive to society?
There are a lot of things to say on the topic because one can go on and on about every aspect of Nicki's life and still not reach a conclusion. So the real question is not "Is Nicki Minaj a feminist?" but rather "What is feminism?" Because if I were to consider feminism from every perspective in life, I think we would end up saying that anything a woman does of her own will is an act of feminism. But this is not the case, so I ask again "What is feminism?" 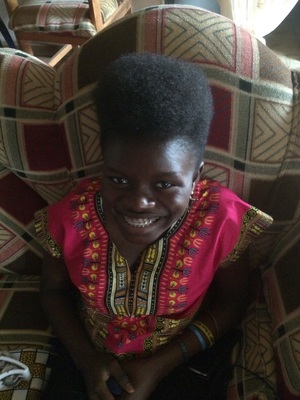 Onyekachi Akpotohwo (Kachi) is 16 years old and currently lives in Lagos, Nigeria where she is in her final year of the IB diploma program at Greensprings School. Upon graduation, she hopes to pursue a career in engineering. She loves reading, writing, taking pictures and participates in athletics when she needs to blow off some steam.