If your heart stops with every dip and bump registered by Gallup's daily tracking poll, here's some welcome news: the race is more stable than you might think.

Emory University Political Science Professor Alan Abramowitz sends along a couple of interesting graphs that each plot Barack Obama's consistent lead over John McCain in the presidential race. In the first graph, each daily tracking poll since the end of the Democratic primary season is charted as a distinct data point, making for what looks like a wild ride: 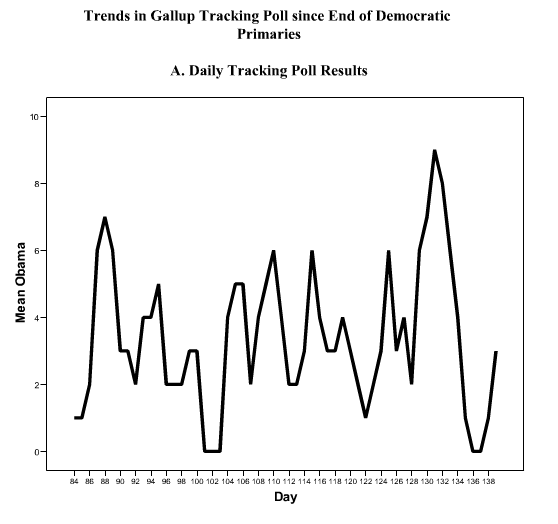 Having some fun with those who would over-interpret this graph, Abramowitz said: "Look--Obama is surging! OMG, Obama's support is collapsing. No wait, he's surging again! Oh no, he's collapsing again! What happened to that 9 point lead? McCain's strategy must be working. All is lost--the end is near! I knew we should have nominated Hillary!"

Then Abramowitz steps back a bit, averaging the Obama lead from each daily tracking poll into 10-day data points, stretching from June 5 to August 4. Which gives him a rather stable-looking 3-to-4 point lead for Obama: 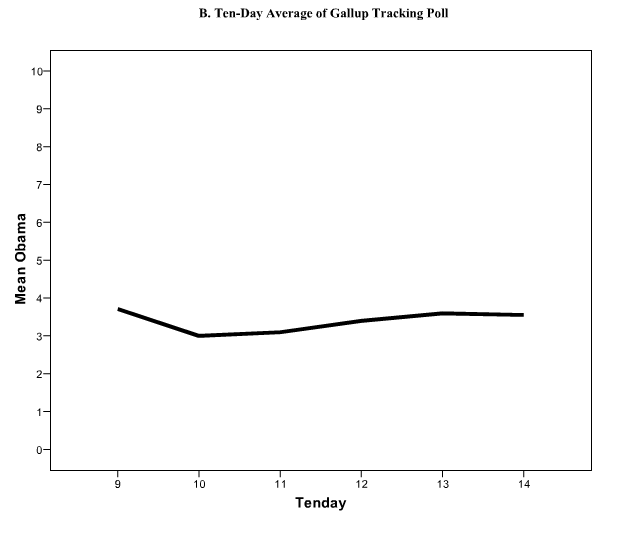 Explaining the optical illusion, Abramowitz says: "When you group the tracking poll data into ten-day periods it becomes clear that support for the presidential candidates since the end of the primaries has been extremely stable, with Obama maintaining a modest but consistent lead, and that almost all of the day-to-day movement in the data is simply random noise."

Or, in a somewhat shorter version of his attitude toward the ups and downs of the daily graph that gets turned over each day on cable news shows, Abramowitz says: "Never mind."