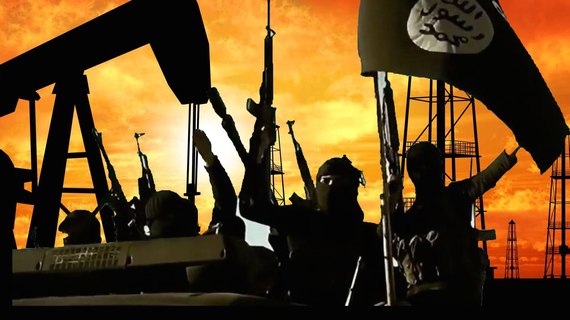 The terror group's crude production, trade and revenue have been vastly over-estimated. It continues to depend on foreign financing to sustain its war machine, argues Luay al-Khatteeb. This post originally appeared on the Petroleum Economist, February 2016.

IT WAS the story of 2015: not only was the so-called Islamic State (IS) unbearably brutal, but the terror-group was raking in vast sums of money by selling oil, using ingenious makeshift refineries and even exporting their petroleum -- a narrative that fit nicely with their Mad Max image of post-apocalyptic evil.

To some, the terrorists' oil wealth was a sign that they were inching closer to statehood, complete with an oil minister who meticulously recorded the distribution of $2m a day to loyal henchmen. Media stories liked to depict IS as "the richest terrorist group in the world", with burgeoning oil wealth that makes it self-sustainable and all too powerful.

In the fog of war, these stories appeared at first to have some truth. The group briefly controlled potential production of 45,000 barrels a day in both Syria and Iraq in mid-2014, though this gradually diminished to around 25,000 b/d in early 2015. Before the frontlines stabilized, oil demand in areas surrounding the so-called caliphate remained high. Revelations and conspiracy theories peaked in late 2015, with Russia claiming an incredible 12,000 trucks were smuggling fuel into Turkey.

This claim was overblown, given the low quality of the oil IS was able to recover. Nonetheless, it obscures a different and equally uncomfortable fact. Towards the end of 2014 a limited quantity of IS oil was being smuggled through middlemen into the Kurdish Region of Iraq and, according to a source close to the matter, and some of that oil was trucked into Turkey, via Dohuk. The Kurdistan Regional Government has angrily denied the claims.

Russian satellite images, while not showing 12,000 IS oil trucks, do in fact show a roaring black economy. This includes Turkish border officials taking tariffs for trade, akin to the smuggling boom during the Iraq-sanctions period. Turkey has always denied that IS oil has crossed its borders.

Calculations fail to add up

Despite the claims surrounding the supposedly oil-rich caliphate, oil was not and is still not critical for IS. Its predecessor, the Islamic State of Iraq, managed to cause chaos for almost a decade without control over a single wellhead. A deeper analysis, based on my interviews with people very familiar with Syria's oilfields and their fate, is that there is no way IS could have operated them efficiently. Even at its peak, IS' oil business would not allow any surplus for significant exports.

Of course, some reports understood that IS was not running anything like an international oil company, and was selling oil at prices of just $30 a barrel when internationally traded benchmarks like Brent were sitting at much higher levels. But an analysis of the economics of the local Syrian market shows even that price to have been too high.

The Syrian fields of Al Omar, Al Tanak and Al Ward were managed by Shell before the war. They contained 40% water content, and the operator netted 60,000-70,000 b/d after the oil was produced. Turning that oil into usable crude, with associated processes of de-gassing, removing sulphur, water and salinity, is not easy. Producers in many developing countries lack the intrinsic capability to do. So considering airstrikes on IS oil facilities began mid-2015, the thought of a nascent terror state pulling off this operation looks shaky.

The oil under IS' control at Qaiyara in Iraq, like that in some Syrian fields now held by the group, is very heavy. It has an API (density) of 14-18°, making the oil almost useless for refining into petroleum. I am reliably told that the heavy oil from Qayyara was until recently valued in local sales at about $4/b.

At the same time, IS' oil operations lack enhanced oil recovery techniques, such as water injection, meaning production has struggled to reach 20,000 b/d. That makes sense: the Energy Information Administration pointed out last year that total Syrian production had collapsed to just 25,000 b/d, compared with pre- 2011 output of around 380,000 b/d. This crude, with a density of 36° API, has nonetheless netted IS little more than $10/b - hardly yielding the kind of oil bonanza some have assumed.

This should make anyone skeptical of claims about the well-oiled IS machine, able to pay its fighters $2m a day to keep battling on myriad frontlines. That narrative presumes both far higher oil production rates (of 40,000 b/d) or a far higher price for IS oil (of around $30/b). Both are vast overestimations. Nor does this reflect the reality of maintaining the military mobility of enough men to advance deeper into Syria and Iraqi western deserts. Captured Iraqi and Syrian tanks and thousands of Humvees require quality fuel, and lots of it - not something you can make in a backyard refinery.

Even before US special forces killed IS oil minister Abu Sayyaf in May 2015, and captured data on the caliphate's oil trade, it should have been clear that the scale of this business was greatly exaggerated. Sayyaf himself may have exaggerated the volume of trade under his control, either to obfuscate or, more likely, to give his boss, Abu Bakr Baghdadi, the self-proclaimed caliph, optimistic reports.

Occupation by IS has been grim -- in social terms, but also financial ones. In January last year, before the strikes on IS' oil business, per capita income for those in the caliphate in Syria was just $115 a month, making it one of the poorest areas of the world. Despite this, the war effort rolled on.

We now know from analysis of internal IS communications that oil accounted for only 27% of the group's funds in the oil-producing province of Dayr az Zawr in Syria. Taxation of people living under IS' control, the appropriation of assets from those expelled from IS territory or murdered, and the sale of antiquities, were bigger sources of funding, at over 40%.

Meanwhile, by the time IS had taken control of Raqqa and Mosul, economic activity had already been stalled for years: both cities were suffering under sanctions and conflict. Mosul had not achieved stability since the end of the US occupation.

Raqqa's vital agriculture sector was in decline due to chronic drought throughout the 2000s, reducing an already low per capita annual income of $2,800 before the war. When the city fell to insurgents in 2013, government salaries had ceased, although they continued in the Iraqi city of Mosul. As inhabitants fled the cities, their departure reduced the potential for taxation too. The sale of antiquities has helped plug some of the financing gap - but experts suggest that such stolen material rarely fetches more than 10 or 20% of the price it would reach if sold through the official channels.

Yet the terror-group is not broken. While most accounts suggest the so-declared caliphate is experiencing total economic collapse, IS continues to replenish its manpower. The Soufan Group, a security advisory firm, recently estimated foreign fighter membership had doubled to more than 30,000 in 2015 -- a damning indictment of Turkey, which has not closed its border to stop this influx.

Either these fighters are happy to accept substantial pay cuts, as IS' income diminishes, or another unaccounted-for source of funding is keeping them happy. That's a reasonable conclusion, given the overestimation of IS' oil finances, the small and shrinking tax-base and the low price IS garners from its sale of antiquities on the black market.

Some might wonder to what extent Gulf Arab financing has continued to subsidize the caliphate. Certainly, IS was able to draw on some other sources of income between January 2015, when Raqqa's economy had reportedly collapsed, and mid-January 2016, when IS forces have been able to launch a major new Syrian offensive. The money is coming from somewhere.

In one recent case, an anti-Christian, anti-Jewish and anti-Shi'a cleric was allowed to speak in a sermon in the main government mosque of Qatar, a Western ally in the fight against IS. Alternative finance avenues such as the dark web and the opaque movement of money during the Hajj pilgrimage need to be fully investigated. Turkey's unfulfilled promises to control its border area, pledged six months ago, must be addressed.

Otherwise, we are left to assume that sympathy for the IS project, fueled by champions of sectarianism, runs disturbingly high. It would not be the first time that Western allies have pledged to fight Salafist terrorism, only for Washington to discover a greater tolerance of radicals than previously known. Hillary Clinton's now-famous complaint in a leaked State Department cable from 2009 that the Saudis were slow to combat terror financing emanating from the kingdom is just one example. In short, IS' ability to finance its expansion of terror relies on more than the smuggling of poor-quality oil or taxing people earning just $115 a month. IS-controlled oil assets have either been completely destroyed or left to function at a fraction of their capacity since mid-2015 in both Iraq and Syria.

Unless the international community deals with the wellspring of global terror-financing - instead of peddling exaggerations of the caliphate's self-reliance and oil capabilities - it will be unable to defeat IS. Its efforts would start with an effective campaign against terror-financing stemming from the Gulf, to stop them from "remaining and expanding". 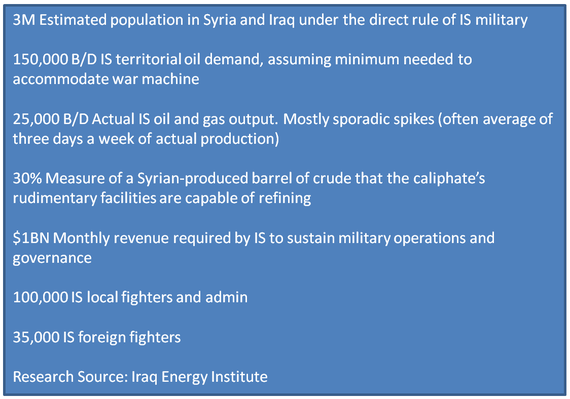