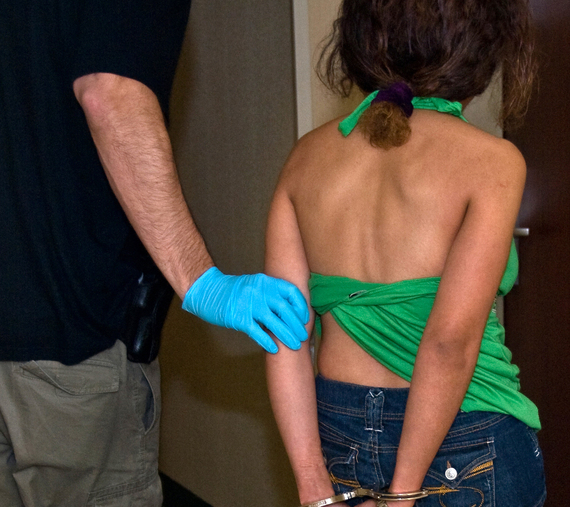 Beginning on October 5, the FBI and state and local law enforcement agencies in 135 cities conducted a week-long sting called Operation Cross Country IX with the stated aim of recovering minors in the sex trade. Operation Cross Country IX is part of the Innocence Lost National Initiative, a nation-wide FBI initiative launched in 2003 intended to address the problem of underage prostitution.

The sweep netted 149 youth involved in the sex trade. It also led to arrests of 150 "pimps as well as other individuals." Rescuing "commercially sexually exploited youth" and catching their "exploiters" sounds like a great thing, right? Actually, it's a bit more complicated. Here are four things you need to know about Operation Cross Country and "rescuing" minors in the sex trade through raids:

2.) It's likely that the "rescue" of a good chunk of the 149 "commercially sexually exploited children" began with handcuffs.
As of August 2014, only 13 states gave minors immunity from prostitution charges, and in some of these states, immunity was only available to those under 16. As for victims of force, coercion or fraud, as of April 2014, no states offered immunity from criminal charges to trafficking victims, and only 15 states allowed trafficking victims to vacate convictions. (As of April 2014, nine states had pending bills, so as many as 24 states may now allow for this). While vacating provisions are a great start, the process of vacating convictions is lengthy and labor-intensive: The Chicago Alliance Against Sexual Exploitation instructs prospective volunteer attorneys that a vacating case will take "between 20 and 40 hours of work over a six- to 15-month time period."

Arrest is traumatic for both trafficking victims and sex workers. And arrest, even when it connects victims to resources they need and even if charges are ultimately dropped or vacated, has very real consequences. As Deanne, a trafficking victim wrote for the Guardian:

In the eyes of the law, I'm both a criminal and a victim - and the impact of being arrested as a prostitute because I was trafficked left deep emotional scars. But the consequences of my arrest goes beyond the anxiety and hurt feelings: it impaired (and continues to impair) my ability to find a job, to obtain housing and government benefits and, really, to improve my life.

3.) "Pimp" doesn't necessarily mean what you think it means.
When the FBI writes that the sweep netted "150 pimps as well as other individuals," pimp means anyone performing a managerial role, even if no minors, force, coercion or fraud are involved and even when the person in the managerial role is herself a sex worker. "...as well as other individuals" means would-be clients. Even individuals who "traffic" minors may not match our stereotypes: they may be the person's peer or an off-license cab driver who accidentally connects with a 17 year old while hawking $20 rides to Backpage.com advertisers.

4.) "Victim" also doesn't necessarily mean what you think it means.
The stereotypical minor sex trafficking victim is a white, cis-gender preteen abducted from her home and forced to sell sex by a very bad man. The average minor sex trafficking victim in the United States is a black or Latino street-based youth, pimp-free, as likely to be male or gender-non-conforming as a cis or trans woman, 15 or 16 or 17, and forced to sell sex for shelter or food. The average underage trafficking victim, rather than the victim on an individual evil person, is the victim of a broader, systemic and societal evil -- where DCFS systems fail youth in group homes, where GLBT youth experience discrimination by foster families and service providers, and where hundreds of run away teens sleep in bus and train stations because there are not enough shelter beds. And as such, the average underage victim would be best rescued by voluntary and culturally competent social services and resources, not SWAT teams and FBI raids.

As with many policies and tactics, Operation Cross Country began in 2003 as a response to an imagined victim and an imagined perpetrator. And even as this imaginary fell apart as new research emerged, Cross Country continued to grow in scale each year while its tactics and reception by the media remained the largely the same.

The overall patterns remain the same: large number of adult women in the sex trade are subjected to intervention by the law enforcement (most, though not all, are arrested or cited for prostitution or other related crimes); young people who are trading sex in order to escape from violence at home or in child welfare system and those who have safe home to go back to are lumped up together and involuntarily 'rescued' back into the systems that they ran away from in the first place; young women and others who work with or alongside other young people are unfairly targeted as 'pimps' even when there is no sign of any abuse or exploitation; Black and Brown men and women are profiled as 'gang members' and 'pimps' while the professionalized white rescue industry employ force, fraud or coercion to tell young people how they should live.

Yes, children, your helping hand is posing as a man who wants to [have sex with] you in a motel room. You will go in expecting what you need: money. Then a bunch of FBI agents will come in with guns and handcuff you and take you to a strange place that you will not be allowed to leave.

I wonder what would happen if we didn't pour tax dollars into grown men trawling the internet for young kids one by one, and instead we funded all of the very best things for all kids, everywhere -- things like good schools and good child care and good neighborhoods with nice outdoor spaces and nice places for every single kid in this country to sleep, and food to fill their bellies. All of them. No matter who they are, who they love, where they were born, or what they look like.

Nah, this way. This is the way it should be, America.