Netflix isn't releasing viewer numbers for its new shows, and the streaming media giant has received quite a bit flack from competitors for not sharing viewership metrics. Or as the BuzzFeed writer stated:

"It's impossible to know how widely watched Orange Is the New Black is..."

This got me thinking that Recorded Future web intelligence data might offer some insights into how much online attention Orange Is the New Black is getting compared to other shows on premium networks like HBO, home of Game of Thrones, or compared to AMC basic cable hits Mad Men and Breaking Bad.

While we at Recorded Future typically focus on things like geopolitical events, corporate activities, or cyber threats, we're now capturing and mining a large enough segment of the open web (around 250,000 sources) that our temporal index often serves as a nice barometer for popular attention.

First, let's look at the facts we do know: Netflix has about 29.17 million subscribers, which is just slightly more than HBO's 28.7 million (source). Thanks to Wikipedia, we also know viewership numbers by episode for popular shows (excluding Netflix).

While Netflix isn't releasing metrics, we can baseline Recorded Future data based on shows that do release viewer numbers and determine if our data can serve as a proxy for viewership. It looks like Orange Is the New Black (OITNB) lags far behind. This makes sense since we know Game Of Thrones has higher viewership (~4.7M) than Mad Men (~2.6M) or Breaking Bad (~2.4M). 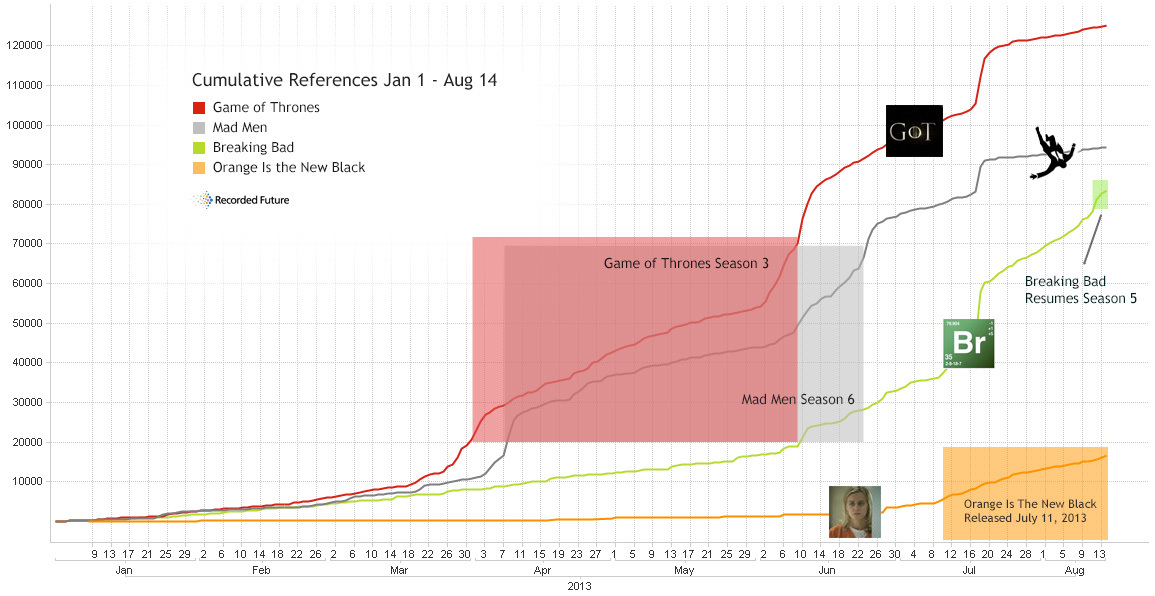 You may be thinking, Orange Is the New Black isn't even in the running when it comes to mentions on the web. Whoa there sport!

OITNB has only been out since July 11, just over one month. Also, OITNB is in its first season while the others have been around for quite a while and are in at least their third season. Further complicating things, OITNB doesn't run weekly like traditional network shows.

However, we do have enough data to start making some basic predictions. We'll throw Boardwalk Empire into the mix to make things even (2 AMC shows: Breaking Bad, Mad Men and 2 HBO shows: Boardwalk Empire, Game of Thrones). 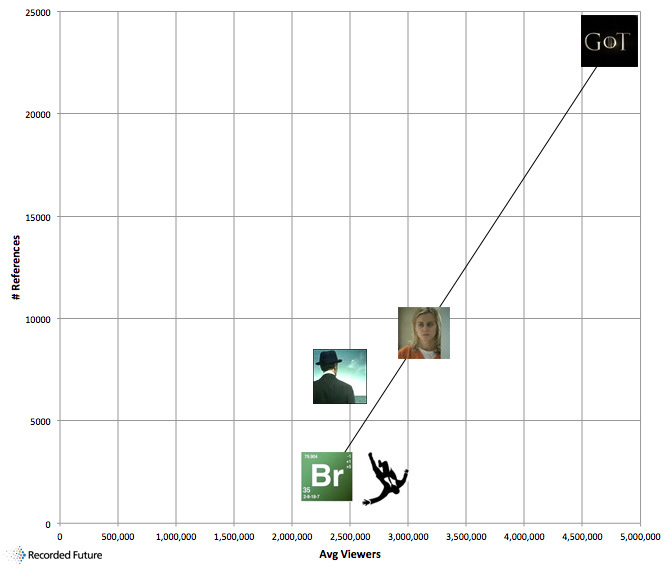 By plotting the number of references in the first week of each show's current season versus known viewer counts (thanks Wikipedia), we can make an educated guess of viewers for OITNB. Based on these calculations Orange Is The New Black already has over 3 million viewers just weeks after it's initial streaming debut. This is quite strong considering Breaking Bad and Mad Men and Boardwalk Empire typically have < 3 million viewers.

Research and writing for this post by Ninja Shoes at Recorded Future.