Ok. Some corners of the news media have headlined a comment made by Stephen Hawkings about Hawkings says Higgs Boson could destroy the universe. To their credit, the stories you read are presented tongue-in-cheek with the disclaimer that it is really unlikely that this will happen. But if it does, our familiar universe will simply wink-out and be replaced by another kind of universe based upon different laws. Presumably the transition will be instantaneous and you will not feel a thing. 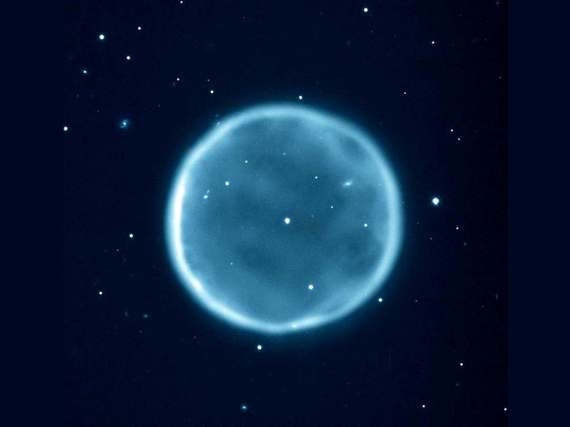 The new universe will emerge from our own like bubbles in uncorked champagne. (Credit: NOAA/Abell 39)

What's this really all about?

Back in 2011, physicist Joan Elias-Miro and her colleagues at the Universitat Autonoma in Barcelona published a paper Higgs mass implications on the stability of the electroweak vacuum that caused some interest among the physics and astronomy community.

Space is not empty but is permeated everywhere by the Higgs field: from the privacy of your bathroom to the most distant reaches of our universe. But because it is a field in Nature, it allows 'empty space' to have its own energy as this field interacts with itself. Physicists think of the energy of empty space, called the quantum vacuum state, in terms of a curve shown below. 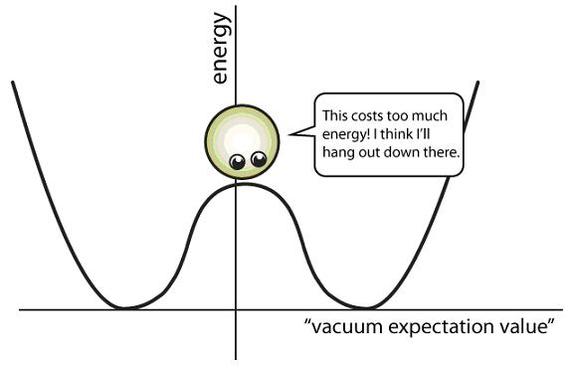 The top of this W-shaped curve is where the vacuum was about a trillionth of a second after the Big Bang. The vertical axis shows the energy of the vacuum, while the horizontal axis indicates the mass of the Higgs boson. When the universe was insanely hot, the Higgs boson had no mass and neither did the electrons and quarks that interacted with it. Then the universe expanded and cooled and the Higgs vacuum settled into the lowest available energy state at the bottom of the W-curve. But here, the Higgs boson took on its present mass of about 126 GeV and this caused electrons and quarks to gain their present masses. All seemed to be well...except it wasn't. We dodged a bullet!

According to physicist Joan Elias-Miro, when you carefully work out how sensitive the current 'Standard Model' of physics is to the energy state of the Higgs vacuum you end up in, you come up with the remarkable diagram shown below. 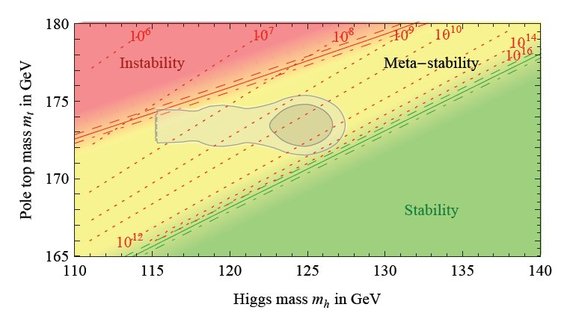 As it turns out, if you described the Higgs vacuum in terms of the eventual mass of the Higgs boson and the Top quark you can work out how stable the vacuum is for other possible values, and mathematically determine whether these other vacuums are stable, unstable or 'metastable'. Stable is what it says. If you change the mass values slightly, or even a lot, you still end up with the current Standard Model our existence depends upon. An unstable Higgs vacuum will decay into one of a large number of alternate possibilities very quickly. Most of these do not like the Standard Model...and us! Now comes the idea of 'metastable'. This means if the Higgs and Top quark masses are only slightly different than what is observed, the vacuum will slowly change into one of its other lower-energy forms, which may or may not favor our kind of physics. If not, pfffft..we could be toast!

Well the good news is that, along with the 26 adjustable parameters in the Standard Model, the values we observe for the mass of the Higgs boson (126 GeV) and the top quark (173 GeV) place our universe and its physical laws exactly in the metastable regime. Luckily, these values predict our universe is stable at least for perhaps trillions of years, so we don't have much to worry about. Here's where Stephen Hawkings steps in.

Hawking gave a talk at the Starmus Conference and explicitly echoed what the original authors said with important caveats lost to the news media. This metastable vaccum change CANNOT be triggered below energies of about 10 billion GeV. There is no accidental way humans could create such vast energies, nor can cosmic rays or other natural phenomena muster these energies today in any meaningful way. In fact, this energy is so high it is smack in the Energy Desert I described in a previous Huffington Post Blog.

So this theoretical discovery turns out to have a lot more to do with our understanding of the Big Bang on the far side of the Energy Desert than it does with our modern universe. I think it's pretty neat that this kind of calculation can be performed, giving us even more insight into what the Big Bang may have been like long before there were recognizable quarks and electrons!

But now for the bad news.

When the vacuum changes from one energy state to a lower energy state, it does so by a process called quantum tunneling. This is the same process that allows nuclei to decay radioactively by emitting helium nuclei (alpha particles) even though they do not have the actual energy to escape the nuclear prison in normal physics. For the vacuum, it resembles bubbles forming in a glass of champagne. The last major tunneling event in our universe happened during the Inflationary Era. As the universe made this transition, it underwent exponential expansion. 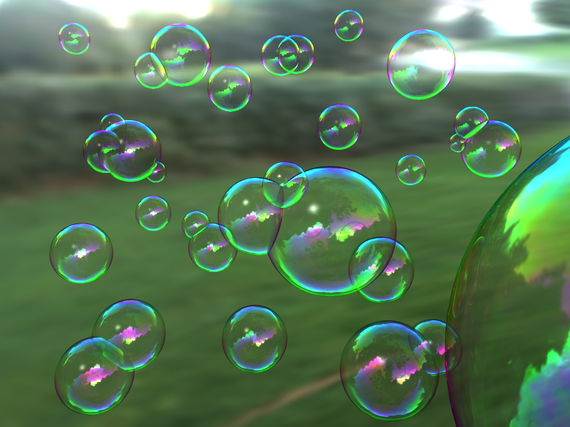 Soap bubbles form like the new vacuum will in our universe, but they expand at the speed of light too! (Credit:Iman Sadeghi/UCSD)
Sadly, astronomers have discovered we have been living in another accelerated expansion phase for the last 8 billion years. So, if you trust the physical explanation, our universe is already making some kind of transition to a lower-energy state even now. The 'dark energy' that is causing this to happen looks like the vacuum energy of some new field beginning its transition to a lower state. We don't know what this field is. We don't even know how far down the vacuum energy ladder our universe will have to drop before we settle into a new lowest-energy vacuum and accelerated expansion finally grinds to a stop.

Until then, hope that it doesn't have to fall too far, and that the new vacuum still likes the Standard Model...and us!