The EPA has put the Chesapeake Bay on a low-pollution diet, limiting the total amount of pollutants, such as nutrients and sediment. One surprising ally in the battle to save the Bay is the oyster. I interviewed Dr. Ashley Smyth, a Scientist at the VA Institute of Marine Science about her work on oysters and how they help cleanse the waters.

Question 1: How exactly do oysters remove pollutants from the water?

Answer: Oysters remove pollutants as they feed. Oysters, like clams and mussels are filtering feeding bivalves, so as they feed they suck material in the water, like sediment and algae out. This action makes the water clearer. In addition, oysters can help remove nutrients by incorporating the nutrients in algae into their shell and meat. Whatever the oyster doesn't use ends up in the sediments as biodeposits, packages of waste.

Microbes and bugs that live in the sediment use the biodeposts for energy and transform some of the nutrients. Microbes can actually take the nitrogen, which is a pollutant, and turn it into nitrogen gas, a form of nitrogen that is essentially inert and makes up 78% of our atmosphere. This process, known as denitrification, is a natural way to remove nitrogen and is important because too much nitrogen fuels algal growth and leads to dead zones and fish kills. 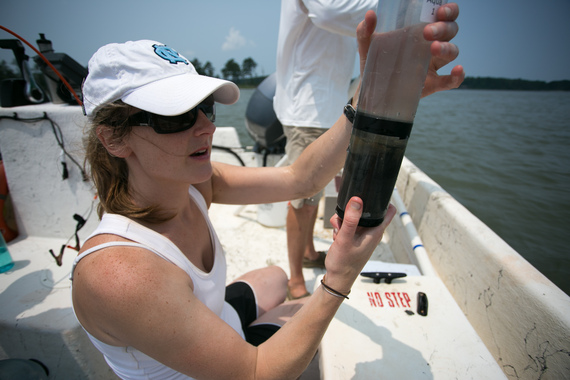 Question 2: Aquaculture is often a dirty word to conservationists. Does your research imply that oyster aquaculture is actually good for the Bay?

Answer: Oyster aquaculture has many positive benefits for the environment! Oysters do not require an additional food source and eat the algae that are already in the water. Oysters raised in aquaculture or the wild function similarly. Oysters are filter feeders, so they actually clean the water as they eat.

Oysters have declined to less than 1% of what they were a century ago. When oysters were at their peak they would filter all the water in the Bay once a week, now it takes over a year for oysters to filter that same amount of water. By adding oysters back into the environment, either through restoration or aquaculture, our waters become clearer, letting more light get to the bottom and helping seagrass come back. Oyster aquaculture also reduces the harvest pressure on the native population, allowing reef building oysters a chance to recover while still helping the oyster industry.

In sum, oyster aquaculture has many positive benefits, including adding oysters back into the Bay, taking the harvest pressure off the native population, cleaning the water, reducing nutrient pollution and also helping the local economy by creating jobs and providing tasty treats for us. 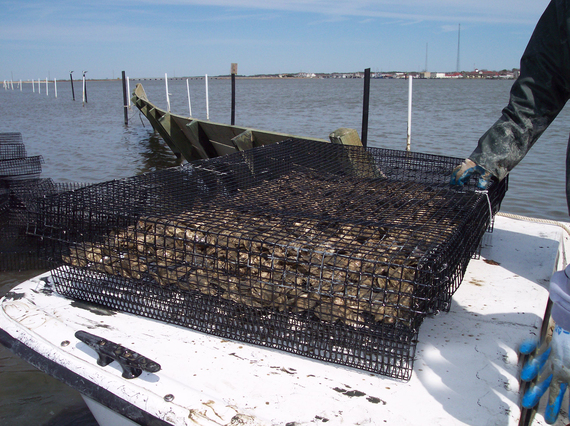 Question 3: Are oysters living in such polluted waters safe to eat?

Answer: Oysters that filter the water and remove nitrogen are still edible. Nitrogen, although it is considered a pollutant, isn't toxic to humans. In fact, it is a building block for life, what is toxic is when there is too much nitrogen. I think of nitrogen like coffee, I need a little of it to start my day, but when I have too much my system crashes.

Nitrogen is like that for the Bay. Areas with high nitrogen inputs are often associated with other problems, including prevalence of pathogens and heavy metal contamination. Shellfish sanitation programs make sure that oysters grown in these areas are not sold for human consumption. If you buy oysters at a restaurant or grocery store they are safe to eat; state agencies regulate harvest times and areas and to make sure of it.

In conclusion, oysters clean our waters naturally and oysters used for this purpose are safe to eat.

Question 4: Is your research controversial? If it is accepted, how should government policies adapt to take maximum advantage of the benefits oysters' bring?

Answer: The water quality benefits of filtration by oysters and other filter-feeding bivalves like clams and mussels have long been recognized. What my research is trying to understand is how oysters process and remove nitrogen.

While oysters do remove nitrogen by incorporating it into their shell and meat as they grow, they can also help support sediment microbes that remove nitrogen. At the same time, there are also processes that recycle nitrogen back into the water. I am trying to understand how things like location and harvesting practices affect the balance between nitrogen removal and recycling to better understand how oysters can be used to clean the Bay and meet water quality goals. I am interested in ways we can use oysters in management plans and if oysters could be included in nutrient trading credit programs, which are similar to carbon credits.

My research shows that current levels of oyster aquaculture in Virginia removes 1% of the total amount of nitrogen that the government says needs to be removed for the Bay to be healthy. Oysters may not be the ultimate solution to water quality issues in the Bay but should be considered a tool in the resource managers' tool box to help improve the quality of our waters.

Question 5: Should people eat more oysters? If so, what varieties are best to help save the Bay?

Answer: Yes! People should eat oysters. The more people eat oysters, the more oysters get put back into the Bay and more water is filtered and more nitrogen is removed.

You want to eat eastern oysters (Crassostrea virginica)--this is the local species of oysters for Chesapeake Bay! Oysters are like wine, their taste is influenced by the waters where they are grown and are named by the grower in the same way that wines made with same grape come in different labels. Oysters with names like Rappahannock's (from the Rappahannock River), Olde Salts (from Chincoteague), Choptank Sweets (from the Choptank River), and Stringrays (from Mobjack Bay), all come from aquaculture in the Chesapeake Bay region. Oysters labeled Chesapeake's, come from wild harvest in the Bay. There are apps like Oysterpedia and Pearl you can download and look up details about the location and taste when you see oysters on the menu. It is satisfying to eat oysters and to know that they have many positive benefits for our environment.