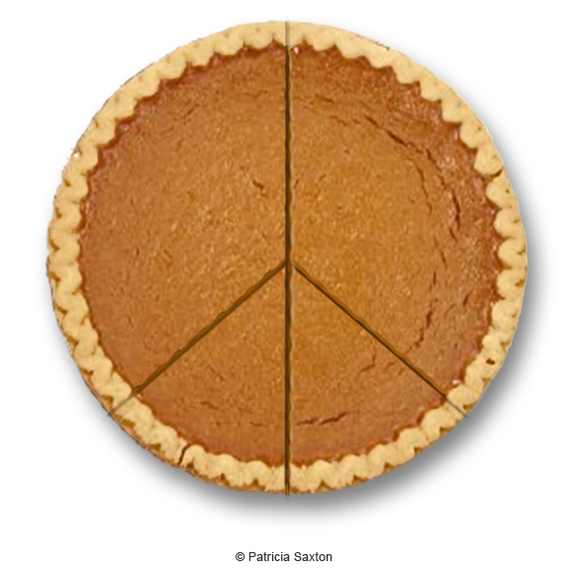 I am usually a proponent of an apolitical Thanksgiving feast. It's been a little over a decade since I declared a moratorium on politics and proselytizing at family gatherings, but I think it may be time to ease up. It's true: our political discourse in this country is more divisive than ever, rife with irrational fear and apocalyptic hysteria. Snarking at each other with cut-and-paste party propaganda on Facebook isn't really helping matters. Maybe it's time to sit down in person, face to face, and talk turkey.

Oh, I know. It sounds awful. To me, too. But you've got to admit, there's no better place than the Thanksgiving table to do it. It really is the one day a year people reach across the political divide. Sure, it's to pass the rosemary mashed potatoes and pumpkin pie, but while gorging on those heaping helpings of turkey and cranberry sauce, we swallow some of our scorn as well, and welcome all the wackos in our extended family to break bread with us. It's important to reconnect in person with people who may not agree with your politics, if only to recognize them as real people again, not just internet trolls, and to let them see you in the same light. Truth is: at the Thanksgiving table, unlike in the news or at the polls, human decency usually wins.

And this year, a dose of good old-fashioned human decency seems especially timely. Maybe -- just maybe -- breaking bread together can break the spell of the fear-mongers and hate-merchants getting all the media time as of late. It's a tall order, I admit. Fear of the Other is at a fever pitch right now, and fear is a powerful political motivator. Even when it's absurd and unfounded, it can seemingly supercede self-interest. At least for some.

Consider Kentucky. Steve Benen of MSNBC's The Rachel Maddow Show recently spoke to several voters there who rely heavily on Medicaid expansion through the Affordable Care Act who nonetheless voted for Republican Governor-elect Matt Bevin, whose platform promised to dismantle it. Here's what one of his supporters had to say after helping vote Bevin into office: "It doesn't look to me as if [Bevin] understands. Without this little bit of help these people are giving me, I could probably die."

Not surprisingly, Benen found "the Kentucky counties most reliant on Medicaid expansion were also the most likely to vote for the candidate who vowed to tear down Medicaid expansion." Why? One Owsley County official put it this way: "a lot of folks ... went to the polls and voted against gay marriage and abortion, and... voted away their health insurance." Another Bevin supporter, a community college student dependent on Medicaid expansion to keep her seven year-old son healthy and her hyperthyroidism in check, was more blunt: "I'm just a die-hard Republican." Unfortunately, without adequate coverage, dying may be the easy part.

It's futile to puzzle over what kind of convoluted calculus would lead anyone to conclude that sacrificing their health, wealth, and the well-being of their children is a reasonable trade-off for... uh, denying marriage licenses to people they don't even know? Offering a safe harbor to families just like their own? I mean, near as I can tell, the idea is: if I vote for you, that ensures some other people's lives are going to be made harder, but it's worth it, because in return I get... oh, uh, nothing. Oh, and you're going to take away my health coverage, too, and I'm probably going to die? Wow. That sounds almost too good to be true. There's got to be a catch!

So, yeah. Obviously, fear doesn't have to make a whole lot of sense. It works better, apparently, if it doesn't. But you can see in Kentucky and lots of other places around the nation where we've all got loved ones, that fear doesn't just harm the ones we're supposed to be afraid of, it causes real harm to those living in fear, especially when they vote out of fear.

So that's where you come in (with a delicious side dish or dessert, of course).

See, you're not a stranger. They're not afraid of you. On the contrary, they've seen how terrible you are at baseball. They know you used to dance to "Like A Virgin" with your walkman on when you thought no one was watching. They've seen all of your school pictures from day one and can pull them out at a moment's notice.

They've also seen how attentive you were when Gram was in hospice dying of cancer. And how much your nieces and nephews love you, and dogs and cats, too, which gives them pause because children and animals are, in general, very good judges of character. And as bad as you were at baseball they know you gave it your all, and you did it with heart.

And for all that, they love you. I mean, they think you're a little weird and sort of insufferable sometimes (you could nip that in the bud if you'd just stop posting about neti pots on Facebook), but they love you, each in their own weird way. And they'll listen to you. And you'll listen to them. And that's how it will begin, over plates piled high with Pro-Life Aunt Janet's green bean casserole and NRA-apologist Cousin Todd's cranberry walnut stuffing.

Maybe your friend Tariq and his wife Iman will drop by with booza for dessert and share in the bounty, and share the story of how they suck at baseball, too, and sing in the shower, and dance and laugh and struggle and weep, and tend to their loved ones, just like the rest of us.

And maybe in this way we'll set aside the fear that divides us for a few hours, and the Union will be saved.