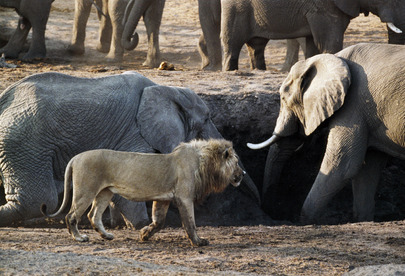 Poaching is on the rise, and after years of reduced trade in tusks and horns, the attacks upon Africa's elephant and rhino populations have dramatically increased -- around 50-100 elephants are killed every day for their ivory. The United Nations structured methodologies via the UN Environment Program, (@UNEP), and CITES, (the UN Convention on International Trade in Endangered Species of Wild Fauna and Flora), after decades of growing effectiveness are now facing deteriorating circumstances both in Africa but particularly the markets which fuel the poaching.

CITES is an international agreement between governments with "the aim to ensure that international trade in specimens of wild animals and plants does not threaten their survival," (see www.cites.org ). CITES has been fashioned with attention to detail and efforts at a comprehensive approach. However, the problem is more in enforcement rather than drafting. Effectiveness is largely dependent on national governments and law enforcement. The poachers' weapons and means are financed by lucrative global markets, particularly the economic rise of Asia which has created higher prices and means to fund new gangs and weapons.

This year Thailand, identified as one of the bigger consuming abusers, is hosting CITES for a global conference to address the ever-more exploited loopholes. Thailand is not alone, and the illegal consumers span the globe, from Shanghai to New York City. However, bordering a largely porous, indifferent Myanmar and with ready access to China and other Asian consumers, Thailand has become a conduit with rather loose laws allowing for domestic consumption and thus lax enforcement. At the start of the conference, Thailand's Prime Minister has promised to tighten laws/regulations on import of "Illegally" obtained tusks. However, will this be enough if any trade in tusks is allowed? How does law enforcement in the field differentiate and implement? Further, it is not just about elephants and rhinos but also about everything from great primates hunted as trophies and bush meat to shark-fin soup. Does this trade not more than offend human sensibilities and empathy and present a danger to our shared global bio-diversity?

The growing abuses and means/methods available to abusers represent a new challenge thus overwhelming current safeguards. We need more, but not only for the sake of the animals. Poaching has fueled regional wars in Africa, particularly the Great Lakes region. The Lords Resistance Army (LRA) is only one of a group of shady paramilitaries that engages in such trade employing the veneer of "rebels," but also engaging in various human rights abuses as child soldiers, human trafficking, and mass rape/sexual exploitation. In several instances, park rangers and others have been butchered along with the wildlife they are designated to protect.

The abuses are no less in the consuming countries. They support organized crime and an illegal weapons trade. They provide both means and incentive to corrupt law enforcement and politicians. The new networks now are international and collaborating on fueling the illegal trade and the conflicts/human rights abuses that provide some camouflage.

Is Abuse of Animal Rights Violation of Human Rights?

Poaching has been intermittently addressed by the UN Security Council as part of the conflicts and broad human rights abuses cited. However, is poaching and the illegal trade the motivation rather than just the means? Should the UN Security Council declare and be prepared to sanction the illegal trade/poaching as a threat to international peace and security and a violation of human rights? Should we move the International Criminal Court toward greater intercession with respect to such cross-border crimes which have become inextricable in some instances from grave violations of international humanitarian law? Does the disappearance of the elephant or the tiger or certain marine or plant species constitute a threat and crime against all of humanity as well as our shared earth? Is a legal trade in endangered species facilitating/camouflaging an illegal trade and human rights and political abuses that appear to be linked?

The latter are not merely philosophical questions but with enormous practical, political, economic as well as environmental considerations. However, maybe we should also ask: Are animal rights also human rights? Does the killing of gorillas huddled as families condition further cruelty of man toward man and seeing each other more as economic units to be exploited rather than brothers and sisters? Empathy is our greatest asset that is perhaps facing a similar corrosive effect as the glaciers in today's political/economic climate.

If you want to shape the debate via digital diplomacy, read our previous article.

To access CITES and follow/influence the current discussions go to www.cites.org