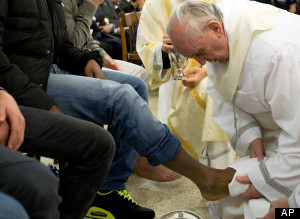 Many religious leaders claim to speak for God and believers, but without a clear mandate from either. Humanity confronts with notions of infallibility. A bit of humility thus goes a long way in convincing at least me that perhaps one has a touch of humanity. Pope Francis in his first crucial year has exhibited a degree of humility that has given hope to masses and challenged the orthodoxy of a comfortably numb establishment.

Claims of shepherding the whole of humanity are part of the form of organized religion, and can be foundations for shared empathy or in the alternative religious discord. Whether we emphasize shared vulnerability or largely superficial differences, we may establish the foundation for interaction between cultures and individuals. Faced with an ever more dominant technology that increasingly defines peace and conflict, spirituality is a necessary complement if we are to avoid so many potential abysses. Many of us mistrust organized religion for its judgmental impositions, most applied toward the other. It has become a common charge that religion has inflicted conflict even as it has preached peace. Read: "Is Religion Cause for War?"Found here.

Pope Francis's common touch was evident from the outset when ritually washing the feet of common sinners, but this symbolic act also seeks further substance. His track record of inclusiveness dates back even before his tenure as Cardinal of Buenos Aires. He initiated a more active inter-faith effort within Argentina, including Jewish, Islamic, Protestant and Orthodox groups (following the Abrahamic traditions). In 1994, he was the first to sign condolences and demand justice after the bombing of a Jewish Community Center. In remarks made by his immediate predecessor perceived by many Muslims as incendiary, he stated that such statements would "destroy in 20 seconds the careful construction of a relationship with Islam that Pope John Paul II built over the last 20 years."He has been one of first to recognize the humanity of atheists and not directly link goodness only to Godliness.

This inclusive approach has carried over to Pope Francis' more prominent role in the swirling arena of international relations, from the Syria conflict to the broader respect for diversity and human rights. The influence of religion in waging peace as well as war is still prominent. From Syria to Myanmar, to the Central African Republic, to Ukraine, religion has been employed as rationale for conflict, killing and, frequently, ethnic cleansing/genocide.

Capital versus the Person?

The new Pope's most revolutionary comments were directed at growing income inequality, wealth concentration and excesses of capitalism:

Some people continue to defend trickle-down theories which assume that economic growth, encouraged by a free market, will inevitably succeed in bringing about greater justice and inclusiveness in the world. This opinion, which has never been confirmed by the facts, expresses a crude and naive trust in the goodness of those wielding economic power and in the sacra­lized workings of the prevailing economic system.

Expecting the Pope to stick to the script of making appeals to end hunger and poverty, some rich donors to the Catholic Church reacted angrily -- effectively some in the U.S. threatened to withhold donations. The reaction to the Pope's statement only re-enforced that money had reverted to undue influence over economics, politics and had believed itself immune to criticism even from a higher authority.

Moving Beyond the New Scandals and Old Walls?

The Catholic Church has been consumed in scandals involving sexual assault and the efforts to purportedly cover up or minimize such. As with Watergate, the expression applies that the cover-up may be worse than the original crime (although it is difficult, something more destructive than pedophilia and abuse of the trust of God-fearing believers -- by the way, not limited just to the Catholic Church, and perhaps having to do with the mystification of sex). The UN issued a report critical of what it perceived as an inadequate response, one perhaps that sought to minimize rather than effectively address.

The new Pope has also been perceived as slow to move on certain doctrinal issues, from contraception to gay rights, (even as he has been more sensitive in his words toward the LGBT community). On women's rights and particularly their role in the Church, Sister Carol Rittner of the Sisters of Mercy, (and renown scholar on rape and sexual crimes in conflict and genocide, as well as Professor at the Richard Stockton College of New Jersey -- the Holocaust Resource Center,) told me that she was also impressed by the tone of the Holy See's words but still waiting for the substance of long overdue change. Certainly that the debate on such issues is now perhaps more open and active may be even more significant than personal apologies offered by the Pope for the past sins, particularly sexual abuse.

Is the Death of Religion Greatly Exaggerated?

It is not just the Catholic Church that is under scrutiny, but the whole methodology of organized religion. Most of mankind are followers, but religion also competes with everything from nationalism to celebrity, politics to sport afficionados, money to economic security. Not withstanding scandal, abuse of trust and outmoded thinking by some segments of clergy in all religions, many persons still seek genuine guidance as well as comfort in religion, or at least spirituality. Pope Francis may help revive confidence not only in religion, but that it can be a force for peace as well as further a revolution within our society. New gods now rise, and established religions are no longer the greatest threats to each other. Contrary to the conflicts embedded in our shared history, the future of organized religion may rest on faiths working together and challenging orthodoxy.