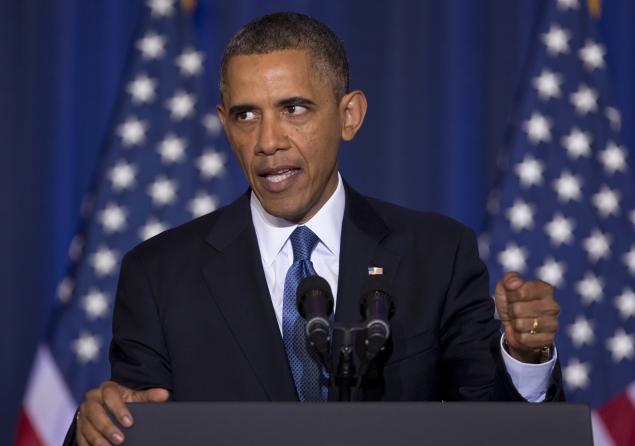 This is the essence of President Obama's remarks last week when he announced an overhaul of NSA procedures and the secret courts and secret opinions.

"I called for a thorough review of our surveillance operations before Mr. Snowden made these leaks... "

In other words, "He stole my thunder."

"As I said at the National Defense University back in May...we have to strike the right balance between protecting our security and preserving our freedoms. And as part of this rebalancing, I called for a review of our surveillance programs.

Now, keep in mind that as a senator, I expressed a healthy skepticism about these programs, and as president, I've taken steps to make sure they have strong oversight by all three branches of government and clear safeguards to prevent abuse and protect the rights of the American people. But given the history of abuse by governments, it's right to ask questions about surveillance -- particularly as technology is reshaping every aspect of our lives.

And there is no doubt that Mr. Snowden's leaks triggered a much more rapid and passionate response than would have been the case if I had simply appointed their review board to go though, ... It would have been less exciting.

I'm also mindful of how these issues are viewed overseas, because American leadership around the world depends upon the example of American democracy and American openness."

On May 23 at the National Defense University, President Obama said:

"The Justice Department's investigation of national security leaks offers a recent example of the challenges involved in striking the right balance between our security and our open society...

...But a free press is also essential for our democracy. That's who we are. And I'm troubled by the possibility that leak investigations may chill the investigative journalism that holds government accountable.

Journalists should not be at legal risk for doing their jobs. Our focus must be on those who break the law. And that's why I've called on Congress to pass a media shield law to guard against government overreach."

In 2005, then-Senator Obama was one of nine senators who criticized section 215 of Patriot Act for providing insufficient protections for civil liberties.

The letter Obama signed said, "We believe the government should be required to convince a judge that the records they are seeking have some connection to a suspected terrorist or spy."

Unfortunately, our Constitutional Law Professor, turned president, had a change of heart and has recently said and done a lot of other things that have made Edward Snowden the most wanted man on the planet. "No, I don't think Mr. Snowden was a patriot," the president went out of his way to emphasize.

The unfortunate reality is that President Obama talks a good game. He has had years to reform and debate the surveillance programs, but has effectively shut all discussion down. He opposed privacy amendments in 2011 and in 2012, the president killed all amendments to the FISA Act.

The Justice Department has consistently fought Freedom Of Information requests regarding FISA court decisions and opinions.

Surely, our constitutional law professor must be familiar with 4th Amendment to the Constitution which is quite clear about the freedoms Americans have.

"The right of the people to be secure in their persons, houses, papers, and effects, against unreasonable searches and seizures, shall not be violated, and no Warrants shall issue, but upon probable cause, supported by Oath or affirmation, and particularly describing the place to be searched, and the persons or things to be seized."

The president has not wanted to risk his formidable credentials as a terrorism fighter. This is what got him reelected. He is the man who took down Osama bin Laden. Now Obama offers our country a Hobson's Choice: put up with massive surveillance, secret courts, monitoring all phone calls and emails... or suffer from terrorist attacks.

The president is clearly conflicted, but so far he is not budging an inch on Edward Snowden, despite polls that say that only 31 percent of the citizens think Snowden should be prosecuted vs 23 percent that says that he is a traitor.

A basic premise of criminal law is that "criminal intent" be present for the accused to be guilty of a crime. Snowden never expressed any criminal intent and said he wanted to exercise his freedom of speech in order to let the public know what the government was up to.

National Security Advisor Susan Rice has said that the leaks haven't damaged us and that the diplomatic consequences "are not that significant."

A few random acts of terrorism are not going to destroy what America is all about, but taking away our liberties and leaving us under a dark blanket of censorship -- which wiping out whistleblowers will do -- threatens to erase many of those qualities that have made our country truly exceptional for so long.

The question is: Is our country better off as a result of Edward Snowden's revelations?

If so, we should we should treat him at least as well as we treated Daniel Ellsberg, who leaked The Pentagon Papers which exposed the lies behind the Vietnam War, and in the process, saved tens of thousands of American lives.

Perhaps one day President Obama will be able to acknowledge Edward Snowden as the great American hero, who loves his country, that he is.