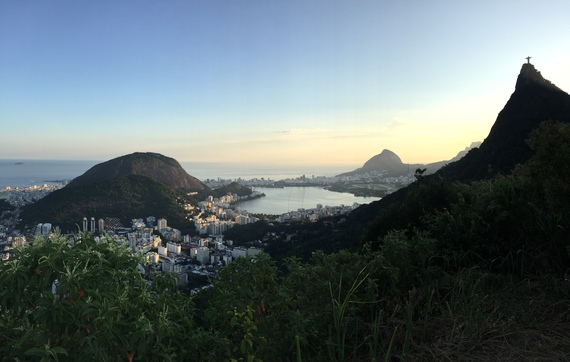 That's what makes it such a special place -- the contrasts that are a microcosm of what makes Brazil tick: poverty and great wealth; forest and city; savage and sophisticate; old world and new.

But despite all the interesting things people could ask about my visits, the first question I always get when I come back is, "but is it safe?"

I usually scoff at people when they assume, a priori, that Latin American cities are inherently "dangerous". But with Rio I pause. It is a comparatively dangerous city, and it's not just limited to marginalized areas. The violence of income inequality is smack dab in your face, and it's very present all over the city. And in a few short months, when Rio de Janeiro is the first South American city to host the Olympic Games, scores of first-time visitors will get to see it first hand.

When I went to Rio for the first time in 2004, visiting a college friend's family on the way to Buenos Aires, I was scared out of my mind. Her well-meaning family kept me inside after dark, convinced me not to open my mouth in the shower, and instilled some healthy (if paranoid) street smarts for this obvious 20-year-old tourist in a fairly dangerous city. Her dad even took me himself to the famous Maracanã stadium, which then seated more than 100,000 rowdy people, and made sure we had a beeline to and from where we needed to be, with no dawdling.

My second visit in 2005, on the way to the north of Brazil on a whistle stop tour, my seemingly nice 3-star hotel lobby on the ocean in Copacabana was stuffed with lots of single women smiling and beckoning as you walked by. On that same trip, walking in downtown, a deranged young lady started to caress my arm at a crosswalk, howling and refusing to let go of my wrist as I pulled away. But yet I keep coming back, and back I came in 2009, 2011, 2013, 2015 and now 2016.

A lot has changed since 2004, including the beginning of favela (slum) pacification programs in 2008, which have cut crime across the city. The rising economic fortunes of the country from 2004-2012 also helped to drive malandros (as the ne'er-do-wells are locally called) away from a life of crime. The World Cup and Olympics were only another impetus to keep the streets safer and more orderly.

So, all in all, is it safe? Of course it's safe to visit, but visitors just have to have street smarts and their wits about them more so than in almost any other major city in the world. Unlike in Europe, where a sideways glance and an open purse might mean a missing wallet, or in the U.S., where you can just escape poverty in the confines of a locked car, in Rio a bad situation can get very bad very quickly. And, even though crime has dropped a lot in the past decade, it's on the rise again.

Take the tragic case of an Argentine tourist, who was stabbed to death this week as she was fleeing a robber in Copacabana. Not only had the robber already gotten her belongings, he chased her to stab her in the chest. I can't think of many other places where that would happen.

But dig deeper and you'll see she was drinking with friends at 2 a.m. on Rio's dodgiest beach, something that any Brazilian knows not to do. A bad situation that turned to worse really quickly. Once you've been to Rio as many times as I have, you start taking more calculated risks, and begin to be less paranoid. But you, first time visitor, should be paranoid.

So what is a first-timer to do? Other than not annoyingly fixating on Zika, which is the fastest way to make any Brazilian want to kill you, I've boiled down my Rio knowledge into five simple rules that will help you strike the right balance between keeping your sanity and keeping your wallet (and possibly life):

Stay inside after 10 p.m. That doesn't mean that you shouldn't be at a restaurant or a bar, or shouldn't enjoy Rio's nightlife, but unless it's carnaval week, do it inside (or outside with lots of people at a boteco or a club). And don't listen to intrepid travel bloggers that tell you to go to baile funk clubs in the favela -- leave that for trip No. 2, or for when you have really cool Brazilian friends who know what they're doing. Also, don't even think about taking money out of an ATM after 10 p.m. -- many bank branches automatically shut them off then anyway to avoid assaults.

Ditch the iPhone. iPhones are easy money in Brazil. Given the byzantine tax regime and absurd markups on luxury goods, iPhones start at around $1,000 in Brazil. That means that brandishing your phone on the street is not a great idea (walking while looking at your phone is also a good way to become a pedestrian fatality). Either bring a toned-down phone for your trip, or just keep it in your pocket until you're indoors and use a traditional map. Any thief worth his salt knows how to extract it from you once you've put it in your pocket / purse and sadly most also know how to assault you to get it.

Take the subway, then take a taxi (or even a bus). Rio has a spectacular, if limited, subway system. But if you're moving between the center, Zona Sul, and Botafogo/Flamengo there's no better way to travel. It's cheap, fast, air conditioned, and well-marked in English. Then when you get to the closest station, if it's dark or you don't feel like walking, Rio's taxis can take you the last mile. Google Maps has most Rio travel information in it, so if you plan your route ahead of time, you can easily see connections and timings. There are often several classes of bus as well -- take the most expensive one if you can, if only for the air conditioning!

Don't bring anything but your skimpy bathing suit to the beach. The beach is one of Rio's great equalizers. Everyone goes, from Fasano to favela, and shares the great sandy space by the Atlantic. This, naturally, can create a convivial and lively environment, and also a great chance for opportunistic theft. Lately, some younger folks have taken to conducting arrastões, where they literally comb the beaches by surrounding unsuspecting beachgoers in large numbers and creating diversions while they pilfer their belongings. Think of it as an opportunity to disconnect, and bring only your fio dental, sunga, and a few reais to buy drinks and snacks from the parade of vendors.

Interact with locals. Cariocas may not be the warmest Brazilians or the most helpful, but remember that they have to deal with the stress and struggle of living there every day. English can be a challenge, but many people you encounter at the café, restaurant or even in the subway will at least make an effort to help you if you are in need. They also have the best, most up-to-date advice on topics related to safety (if you read the news it's impossible not to). So do yourself a favor and talk to more Brazilians!

None of this is to say that you're guaranteed a stress-free and scot-free visit with a few simple steps. But being a first time visitor to Rio is so much more rewarding if you can find ways to not feel paranoid all the time. There's no doubt you'll want to come back. And when you do, you'll be wiser, more street smart, and in a position to be a little more adventuresome. But do yourself a favor and wait until next time.