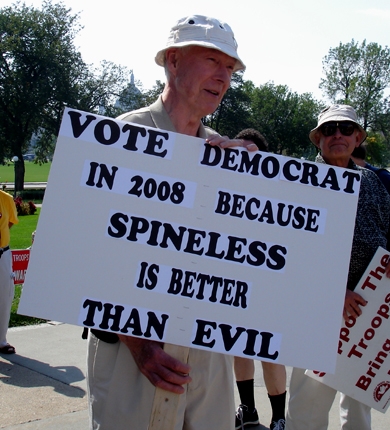 This guy's sign at last week's peace rally on the St. Paul Capitol steps really connected with a lot of people. But is the answer that clear?

Considering the slick double-talking of Minnesota Politician Norm Coleman, for example, whom we were able to recently capture on videotape (posted here), artfully dodging and deflecting our questions about why he won't vote to end the occupation of Iraq, how can we even distinguish between what's evil and what's just spineless? Coleman says his is not double-talk, it's "middle ground" and certainly many "fair and balanced" (and lazy) reporters willingly print what he tells them.

But Coleman happens to be one of only a handful of neocon-leaning Senators who co-sponsored the Kyl-Lieberman amendment which passed (once its worst language was removed) and could pave the way for Bush to launch a massive bombing attack on Iran. You know, the bombing that neocon Norman Podhoretz "hopes and prays for"and secretly urged Bush and Rove to begin not long ago. The letter Coleman currently sends out containing his views of "U.S. policy on Iran" is so full of double-talk, that it's hard to figure out what he's saying, but it's probably significant when he inserts "the President may take necessary actions to defend American Security, but Congress must authorize these actions within 60 to 90 days, or the forces must be withdrawn." Certainly 60 to 90 days is enough time for another promised cakewalk to turn into a new quagmire. Then Congress will get involved? Haven't they learned that starting wars is a lot easier than ending them? Or do they really not care at all about this country's national security?

Hardly on "middle ground", Coleman supported the amendment BEFORE the bill's backers were forced to take out its most incendiary language, including a provision "to support the prudent and calibrated use of all instruments of United States national power ... including diplomatic, economic, intelligence, and military instruments". Sen. Dodd, on the other hand, correctly pointed out that it takes little to "give this President a green light to act recklessly and endanger US national security. We learned in the run up to the Iraq war that seemingly nonbinding language passed by this Senate can have profound consequences. We need the president to use robust diplomacy to address concerns with Iran, not the language in this amendment that the president can point to if he decides to draw this country into another disastrous war of choice. We shouldn't repeat our mistakes and enable this President again."

As an aside, the only consolation in the terrible 76-22 vote on Kyl-Lieberman's bill which helps pave the way for Bush-Cheney's plan to bomb Iran was Minnesota Democratic Senator Amy Klobuchar's "NO" vote along with 19 other Democrats and Republican Senators Hagel and Lugar. A number of us had been writing and calling her to "stand tall" and resist all the pressures, fear-mongering and special interest groups; but instead, to vote her conscience and do what's right by the Minnesotans who elected her. The small group of 22 Senators "standing tall" yesterday, not giving their go-ahead to "War President" Bush's third war, could not help but bring a lump in my throat as it rekindled memories of the late Paul Wellstone's brave vote in October, 2002. Wellstone was the only Democratic incumbent facing a re-election challenge who voted "no" to the Iraq War along with 22 other Senators. The late Minnesota Senator apparently even defied recommendations from his own staff who wanted him to do the easier thing politically and just go along with the vote authorizing war on Iraq. Wellstone was threatened with loss of his re-election only a few weeks away--to none other than slick politician Norm Coleman. So how tough was Wellstone's decision to vote his conscience under those circumstances?! (And if I may digress on a personal note, seeing Wellstone vote against authorizing a war that I knew to be totally unjustified and based on lies was the epiphany moment that changed me from having reflexively voted for Republicans most of my entire life.)

So the 22 bipartisan votes evidencing spine are proof, on a couple of levels, that this guy's sign is not entirely correct. But polls do show public approval of Congress is down to 11% and there is that common perception of the Democratic majority in Congress being spineless.

Which brings us to the question: IS spineless better than evil? I hate to keep lecturing about this but as an ethics-teacher, and this hopefully being a teachable moment, . . .

Spineless IS better than evil. But spinelessness is characterized by silence and silence is complicity. Inaction is also complicity. The Kitty Genovese stabbing incident exposes how and why bystander apathy works. It is not true apathy but only (temporary) denial of an ugly, unpleasant truth (that a woman's screams could possibly mean someone is being stabbed right below one's window, in one's own alley) and (temporary) confusion as to what to do about it. People are unprepared for such relatively unusual (and horrible) events. And this accounts for both their lack of initial vigilance as well as their inability to react quickly. So in the Kitty Genovese case, thirty eight otherwise good people ignored the sounds of a woman being stabbed but it wasn't because they didn't care. It was primarily because they hadn't practiced for such an event. They hadn't previously carefully considered what to do in such a situation.

Perhaps the most profound lesson of the last century's most horrible event, the Holocaust was: "Thou shalt not be a victim. Thou shalt not be a perpetrator. Above all, thou shalt not be a bystander." The man judged to be smartest of the last century, Albert Einstein, similarly said, "The world is a dangerous place, not because of those who do evil, but because of those who look on and do nothing." These quotes certainly don't mean that any one bystander is worse than any particular perpetrator or evil doer. What they mean is that the perpetrators are few in number while the bystanders are many and could easily stop the perpetrators if they only tried. Unfortunately this sad lesson of history seems to be repeating and, Holocaust museum sign nothwithstanding, few remember it.

I know one thing. If Paul Wellstone were alive, he would have been proud of Senator Klobuchar and the other 21 Senators who are not in denial about the potential disastrous consequences to giving another green light to this "war president." I bet Wellstone would also be calling for all bystanders to immediately report for duty to stop the Bush-Cheney-Lieberman and other neocon war hawks from launching their third war in six years.