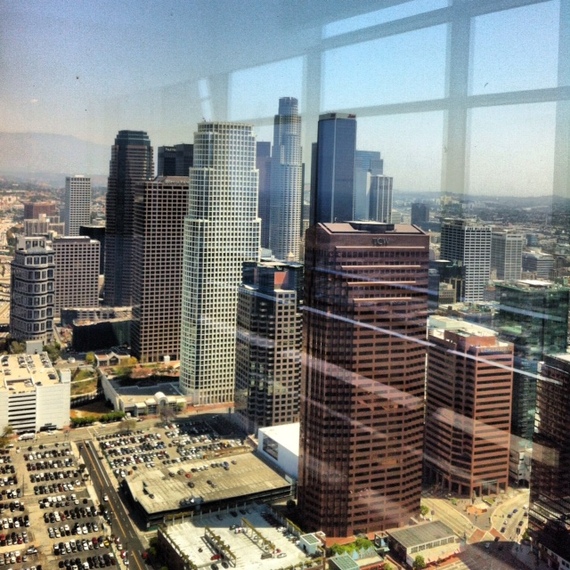 Rents are higher in Los Angeles than in any other major U.S. city, according to several recent studies. There is wide agreement that the city is facing a huge affordability crisis. But far less consensus on the solutions. Two experts at a recent Urban Land institute meeting espoused contrary views. Both sides offered challenging data on the city's demographic future.

Wendell Cox, Principal of consulting firm Demographia, gave a surprising view of Los Angeles' density. L.A. is 30% more dense than New York City, and is "the most-dense city in the U.S.," he said. This view has been noted elsewhere, but it's still shocking to hear it, given the city's reputation for sprawl. The reason: New York has Manhattan, but Los Angeles has suburbs that are "twice as dense" as NYC's suburbs.

Another myth-busting factoid from Cox: "As bad as traffic is in L.A., it is a dream compared to other cities in the world." He pegged the average Los Angeles commute at 28 minutes one-way. That is no dream, unless it's compared to, say, Hong Kong, where Cox says the commute is 47 minutes.

But is all this a good reason for boosting development on the urban fringe? Cox said yes, and blamed unaffordability on smart growth, or "urban containment." And he warned that the development prescriptions in California's SB 375 greenhouse-gas law will make the crisis worse. As if to say, "Hey, we are already super-dense, but it's not so bad, and people have to live somewhere, so let's build on the fringe!"

Go for Infill
The contrary presentation came from Dowell Myers, Professor, Sol Price School of Public Policy at University of Southern California. Myers' main assumption: "We don't have enough apartments." He prescribed building more wherever possible in infill settings: "It would help curb sprawl and help affordability." The obvious implication: Building on the fringe is cheaper, but doesn't solve long-term problems.

A long-coveted source of new homebuyers - the millennials aged 25-34 - are still not buying homes. This key group, he said, is not just slow to buy. They are also slow to move, to take up driving, even to get drivers licenses.

What About Backyard Housing?
One solution not mentioned by: How about loosening restrictions on "R1 zoning?" These are L.A.'s single-family neighborhoods: They may offer room for additional housing units, which could ease the crunch and lower rents. There have been various recent proposals to liberalize restrictions on single-family lots, allowing for more "granny flats," backyard housing, and other paths to increased density.

Myers' response: "Where will they park?" His skepticism is rooted in the resistance by neighborhood associations. These powerful groups will always oppose increased street parking.
But this response was challenged by audience members because it did not account for transportation trends such as shared-vehicles, new technologies such as Uber and Lyft, increased bicycle use, and a possible future of drastically reduced private car ownership.
For more on this possible future, including a dramatic prediction of 200 million driverless cars in the U.S. by 2020, see this report from ULI Los Angeles' recent Future Build conference.