"I loved the Berenstain Bears when I was a kid, too." I told my 5-year-old daughter the other day as we sat watching it together.

"Was it your favorite show?" she asked me.

"Actually, there wasn't a show when I was little -- they were only books." I told her.

This feels like an all-too-common conversation between us, and a source of concern for me, both as a parent and as a writer and former English teacher. So many of the beloved children's book characters that I discovered in my youth are now represented in shows and movies as both animated and "real-life" characters. I worry that the opportunities that I had as a child to imagine how these characters looked, sounded and felt to me was going to be taken from my both of my young children before they had the chance to experience the same joy and wonder that comes with getting to know these classic members of the children's literary canon.

Around every corner, there is another book with characters I once felt I knew personally -- The Berenstain Bears, Corduroy, Matilda, James (of Giant Peach fame), Ramona Quimby, Winnie the Pooh -- that are now available to children in 3D. They don't have to imagine how they walk or talk, what their voices sound like or how they interact with their friends and family; it's all right there, laid out in front of them on screens both big and small.

Now, I realize that I have the ability to choose what my children can and can't see, but I also don't want to be the dictator who rules over what type of media they consume. As much as I love reading and desperately want to raise my children as voracious readers, I know what the world is now, and I -- either selfishly or just realistically -- need a break sometimes and appreciate the value of screen time for both myself and for my children. With both of my children still of preschool age and not yet experienced readers, books are not a viable "quiet time" option just yet. Neither of them has the attention span to sit with what is essentially just a picture book from their perspective as pre-readers, for more than a few moments before becoming bored, but television -- or one of the carefully-curated apps my husband and I have chosen for them on our iPad -- provides that much-needed opportunity for them to slow down.

They have both been introduced to revered fictional personalities such as the The Cat in the Hat, Babar and Curious George when I've read the books to them, but an occasional bedtime reading cannot compete with the PBS Kids app (which I think is phenomenal) where they can watch, interact and play games with these beloved characters.

Those characters I discovered in books as a child were my friends, in part because I was allowed to mould them into whatever my heart and mind wanted or needed them to be at that point in my life. These days, it seems as though the cart has been put before the horse in that sense -- the majority of books are either based on characters that are already in television shows or movies, or that the turnaround from book-to-show is so quick, children don't get to sit with and "get to know" their version of the character for very long before they're being shown a director's vision of it.

Will these high-tech introductions stifle or foster my children's interest in these timeless characters?

Will they be robbed of having the same rich experience as readers that I did, or will their experience be further enriched and enhanced by getting to know them a variety of formats -- through books, videos and apps?

Is tech killing these beloved characters, or bringing them to life even more richly for our children? Here's hoping that my little Sister Bear and Brother Bear get the best of both... 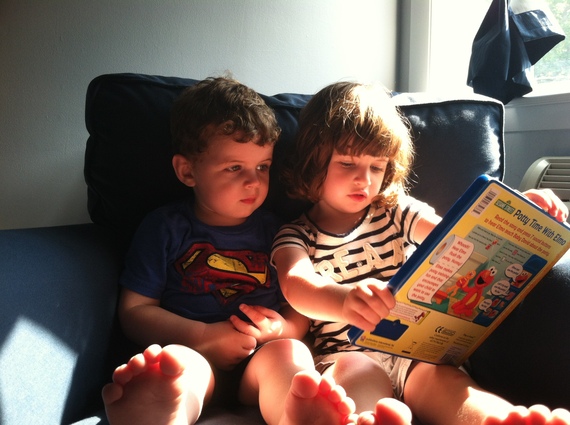 
More:
PBS kids booksParenting Parentsparents-families-tech
Newsletter Sign Up
Raise the kind of person you'd like to know
Subscribe to our parenting newsletter.
Successfully Subscribed!
Realness delivered to your inbox