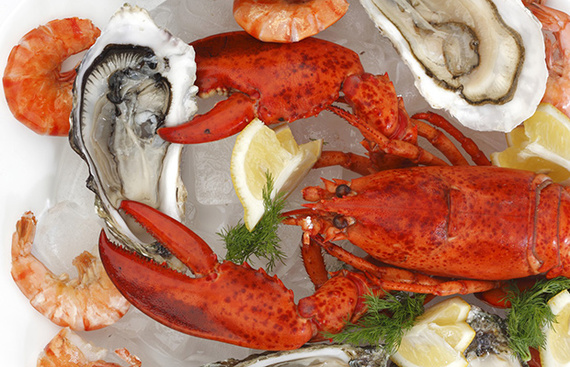 You know fruit and vegetables have the most flavor during the months when they're being harvested. It might be surprising, though, that the same is true of seafood. "Many species are migratory, meaning they're available fresh in various regions only at certain times of the year," says Jeff Ludwin, meat, poultry and seafood specialist at FreshDirect. "Tuna and swordfish travel south to warmer climates in winter, for instance, and then swing back up to the northeast and Canada in the summer." Sustainability practices, such as catching regulations and government quotas, also help determine how much seafood is available in each area throughout the year.

So what's the big deal if you're consuming seafood out of season? Read on for Ludwin's advice about why fresh is best -- and how to ensure you're getting the catch of the day.

Better flavor and texture are the most obvious reasons to opt for fresh fish. Another thing to consider: When you eat seafood in season, you'll avoid ingesting extra chemicals. "Preservatives and other additives are often added to frozen varieties to help maintain their quality," says Ludwin. "Scallops and shrimp, for instance, are treated with sulfites to prevent them from deteriorating." Note: Scallops are one of the few types of seafood in season nearly year-round, along with mussels, so getting them fresh should never be an issue.

Live near the water? You might already know what times of year your favorite seafood starts appearing in abundance. But seasonal seafood is available everywhere, even if you live in a landlocked state. Many supermarkets get fresh, never-frozen fish shipped in from the coasts several days a week. Check a calendar like this one from Alaska Seafood to know which region currently has your seafood of choice in season. Then ask your grocer where their fish was caught and when they received it to ensure it's fresh off the boat.

Keep in mind that seasonality comes into play only with wild species (those that have grown in their natural habitat). Farmed seafood (that which has been raised in a tank or other manmade facility) -- including salmon, shrimp, and tilapia -- is available fresh year-round. The health benefits of farmed vs. wild fish have been debated, with research suggesting that the former contains more chemicals but higher levels of omega-3 fatty acids. Recently the Monterey Bay Aquarium Seafood Watch organization included both in its list of healthiest seafood. Check the packaging or ask your grocer to know which variety you're purchasing. Whichever you pick, make sure you're getting a fresh catch.

Finding seafood that's in season is just the first step to guaranteeing freshness. Next you'll want to carefully choose your fish to get the best quality. "If you're looking at a whole fish, the gills should be dark red, not dull brown, and the eyes should be clear and not cloudy," says Ludwin. Pay attention to the texture of the flesh: It should feel very firm and bounce back if you push on it. Finally, stay away from any seafood with a strong fishy odor, he says. If it was just caught from the ocean, it'll smell like briny saltwater instead.

More from Life by DailyBurn:
Egg Whites or Whole Eggs: Which Are Healthier?
4 Science-Backed Cooking Hacks from The Food Lab
5 Intermittent Fasting Methods: Which One Is Right for You?