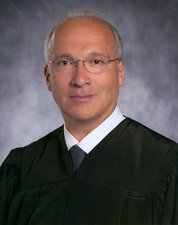 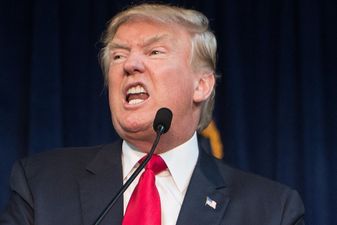 Unfortunately for Trump, the umpire is Judge Gonzalo Curiel of the Federal District Court in San Diego, who is presiding over a class action lawsuit accusing Trump University of defrauding and misleading consumers who plunked down at least $1,500 for three-day seminars -- and up to $35,000 for additional courses -- that promised to teach Trump's secrets of success in real estate. The lawsuit has already exposed Trump in a series of outrageous lies, confirming his well-deserved reputation as a huckster.

Newly released documents from Trump University's own files reveal Trump to be a creepy, greedy, and amoral con artist.

But we already knew that. Trump is contemptible is many ways. Now, however, legal experts are suggesting that, as a result of his recent crude and racist remarks about Judge Curiel, Trump should be held in contempt of court.

At a campaign rally on Friday at the Convention Center in San Diego, just a few blocks from the federal courthouse, the presumptive Republican presidential nominee went ballistic, using 12 minutes of his 58-minute speech to engage in a vitriolic rant that included paranoid attacks on Judge Curiel. "The judge was appointed by Barack Obama," Trump said. "I mean frankly, he should recuse himself because he's given us ruling after ruling after ruling, negative, negative, negative." Trump clamed that Curiel was "very hostile" and a "hater of Donald Trump." (Trump likes to refer to himself in the third person). Trump said that Curiel "should be ashamed of himself. I think it's a disgrace that he's doing this." Trump claimed that he was being "railroaded" by the legal system and has been "treated unfairly."

Then, within minutes after the rabid crowd had been chanting "build that wall," Trump said that Curiel "happens to be, we believe, Mexican." This comment was clearly meant to further inflame Trump's fans and suggest that the judge was not an American, was biased against him, or both.

All of these statements by Trump are lies. For one thing, Curiel is an American who was born in Indiana. In addition, contrary to Trump's claim that the judge was biased against him, a few weeks ago Curiel agreed to Trump's request to delay the start of the trial, which had been scheduled for this summer, until November 28, after the election. At the time, Curiel explained -- over the objections of the plaintiffs' attorneys -- that holding the trial during the election could create a "media frenzy" that would make it hard to impanel an unbiased jury.

Finally, and again contrary to Trump's accusations, Judge Curiel is hardly a liberal activist beholden to Obama. Curiel served as a federal prosecutor in Los Angeles and San Diego between 1989 and 2006. In the 1990s, after Curiel sought to extradite two drug lords from Mexico, a Mexican drug cartel targeted him for assassination. He was first appointed to the bench in 2006 by Republican Gov. Arnold Schwarzenegger, who named Curiel to the California Superior Court. In 2012 the U.S. Senate confirmed Curiel as a federal judge on a voice vote without a single Republican expressing any opposition.

On Friday, Judge Curiel ordered the unsealing of about 1,000 pages of the for-profit Trump University's internal documents. This came in response to a legal motion filed by the Washington Post and is standard procedure in civil lawsuits. So on Memorial Day Trump returned to Twitter to continue his attacks on Curiel, calling him "unfair" and "Totally biased-hates Trump."

The documents include Trump University's playbooks for employees that, according to the New York Times, "provide a detailed set of instructions for how to sell the classes, even to skeptical and reluctant consumers, by tapping into their psychological needs." (Trump's lawyers tried to to keep the playbook under wraps, claiming that they included trade secrets, but Judge Curiel disagreed).

Among those documents are testimony by former managers of the now-defunct Trump University that reveal the operation to be, as the Times summarized, an "unscrupulous business that relied on high-pressure sales tactics, employed unqualified instructors, made deceptive claims and exploited vulnerable students willing to pay tens of thousands for Mr. Trump's insights."

Ronald Schnackenberg, a Trump University sales manager, recalled that he was reprimanded for not pushing a financially struggling couple hard enough to sign up for a $35,000 real estate class, even though he believe that it would endanger their economic future. After Schnackenberg refused to make the sales pitch, another Trump University salesman persuaded the couple to enroll in the class.

"I believe that Trump University was a fraudulent scheme," wrote Schnackenberg in his testimony, "and that it preyed upon the elderly and uneducated to separate them from their money."

Trump opened Trump University in 2005. Although he claimed to have personally "hand selected" the instructors and shaped the curriculum, Trump was later forced to admit that he was completely uninvolved in its day-to-day operations. Jason Nicholas, a Trump University sales executive, testified that Trump's claim of being "actively involved" in the operation was "a facade, a total lie."

Moreover, most of the instructors had no experience in real estate. They were high-pressure salespersons selling fantasies of real estate riches, luring in prospective "students" by promising that they would learn how to take advantage of housing market crisis to earn quick profits. According to a transcript of a web-based promotional video, Trump claimed his university would "teach you better than the best business school."

In fact, Trump University wasn't a university at all. It wasn't licensed as an educational institution. It gave no degrees. It was simply a business operation -- another way for Trump to use his brand to scam people desperate to find ways to improve their lives at a time when the economy was crashing.

Reading the Trump University documents, which the Times has posted on its website, makes you want to take a shower. If the institution had a motto, it should have been "Make Donald Trump Rich Again."

But beyond one's personal disgust with Trump's business practices and paranoid comments, there's the matter of legal ethics. Trump's attacks on Judge Curiel have led some legal experts to make the case that the GOP's nominee-in-waiting should be held in contempt of court.

"Mr. Trump's conduct could be subject to sanction for indirect criminal contempt of court," Charles G. Geyh, a legal ethics expert at Indiana University's Maurer School of Law, told the New York Times. According to Geyh, Trump " has impugned the honesty of the judge in a pending case and has done so in the context of a political rally that seems calculated to intimidate by inciting anger among his supporters."

"Under well-established canons of ethics and judicial rules relating to contumacious conduct, comments that are rude, insulting or disrespectful made by a party to litigation about a presiding judge, either in or out of court, are subject to censure as constituting contempt of court. Hopefully, Judge Curiel will see fit to hold Trump in contempt of court for his diatribe. But independently, the judges of our nation as well as the entire bar should speak out loudly against Trump's contemptuous remarks about a member of the Federal judiciary. It is precisely because Trump has demonstrated such contempt for the judicial branch of government through his attack on Judge Curiel, that it is the obligation of the legal profession to respond promptly and in no uncertain terms, to his outrageous conduct."

Trump's standard practice is to use bullying and name-calling to intimidate people he dislikes or is threatened by. His diatribe put Judge Curiel in an awkward position. As a federal judge, Curiel can't publicly defend himself against Trump's malicious attack. But there is certainly precedent for Curiel to hold Trump in contempt for impugning the integrity of the federal court and have federal marshals haul him to jail until he apologizes.

Judge Curiel is more likely to let Trump continue his campaign rather than toss him behind bars for contempt. In fact, he did Trump a big favor by postponing the trial until after the election.

During his San Diego tirade, Trump said that he looked forward to standing trial after being elected president. "Wouldn't that be wild if I'm president and I come back [to San Diego] to do a civil case?" he told the crowd.

Hopefully, by the time Trump he gets on the stand in federal court in late November, he'll simply be a former Republican presidential candidate on trial for his predatory business practices. Instead of being inaugurated in Washington, D.C., he'll be cross-examined in San Diego. Having lost in the court of public opinion, he'll have to defend himself in a court of law. And if the jury is as smart as the voters, he'll lose there, too.

Peter Dreier is a professor of politics and chair of the Urban & Environmental Policy Department at Occidental College. His most recent book is The 100 Greatest Americans of the 20th Century: A Social Justice Hall of Fame (Nation Books).