If you've ever had the unfortunate experience of having your beloved dog go missing then you know firsthand the anguish and despair that brings. The long hours searching the streets, posting dozens of flyers, obsessively searching the Craigslist "Found" section and visiting every animal shelter in the county. During this time you imagine all types of scenarios: is she hurt, afraid, or dead?

But, chances are you never considered that your dog could be in a laboratory undergoing painful experiments. What's more, you probably would never imagine that the laboratory obtained him from your local shelter via a practice commonly known as "pound seizure."

If you think that's a horrific thought, you're not alone. A 2016 public opinion poll conducted by YouGov and commissioned by Cruelty-Free International found that 68 percent of US adults agree that dogs found or given to animal shelters should not be sold to laboratories for experiments. But it is allowed in many states across the nation. While 17 states now prohibit pound seizure, 11 states have laws that explicitly allow this cruel practice and 22 states are silent on the issue. 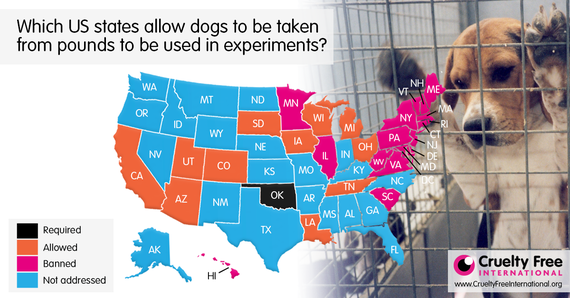 Pound seizure actually has a long and sordid history in the US. In the 1940s the biomedical industry pushed through legislation in several states to legally require animal shelters to provide dogs and cats for use in experiments. But the practice was largely under the public radar until 1965 when a Dalmatian named Pepper was sold to a laboratory by dealer who collected animals from shelters and other sources for resale to laboratories. Pepper's family frantically searched for her but by the time they found out she had been sold to a laboratory it was too late. Pepper died in a laboratory experiment less than a month after she went missing.

However, the Act fell short of its intended goal. Regulating dog dealers proved to be difficult and costly and dogs continue to be stolen and abused at the hands of dog dealers. As a result, in a reversal of the 1940s trend, states began to take action to pass legislation that prohibits laboratories from obtaining animals from public shelters. In states that failed to take action, many local municipalities have passed bans - with support from local shelters who rightfully view the sale of dogs to laboratories as a conflict of interest and counter to their lifesaving missions, as well as a violation of public trust.

The legal strictures in some states on the use of stray or shelter dogs (known "random source dogs" in the research industry) has helped reduce the practice in the US. The flow of dogs from shelters to laboratories has also been stymied by the drying up of a major source of funding. A 2009, report by the United States' National Academy of Sciences report concluded that random source cats and dogs were not critical for biomedical research, and that using them could damage the reputation of the research industry with the public. As a result of this report, the United States National Institutes of Health (the largest funder of animal experiments in the US) ended funding for research using random source cats in 2012 and for random source dogs in 2015.

Today thankfully the use of stray, shelter, or "random source" dogs in laboratory experiments is on the decline in the United States. And, if historic and present day public opinion is any indication, a complete end to this shady practice can't come soon enough.

Dogs become lost, stray or end up in shelters largely because of the irresponsibility, error, or misfortune of humans. We should not shirk our responsibility to them by allowing them to be handed over to suffer in laboratories.