The Obama administration enjoyed a moment of triumphalism this past week. The economy lost only 247,000 jobs in July, and due to a statistical oddity the unemployment rate actually dropped a tenth of a point, to 9.4 percent rather than rising to 9.7 as had been predicted. President Obama briefly popped into the Rose Garden to advise reporters that his leadership has "rescued the economy from catastrophe."

Broad credit was given to the $787 billion stimulus package approved at Obama's urging in February. Commentators generally calculated that without the stimulus, the job numbers would have been a lot worse. Some economists suggested that the unemployment rate might be spared double digits. Even the usually pessimistic Nouriel Roubini, who was an early Cassandra warning of the collapse, declared that the economy had turned a corner. The stock market continued its amazing rebound.

But before we break out the champagne and declare the recession over, let's put this all in perspective. First, the job numbers. The official unemployment rate dropped only because so many people have given up looking for work and dropped out of the measured labor force. But of course, they are just as unemployed -- in fact, more so, since the long-term unemployed have the hardest time finding work. The percentage of long-term unemployment is still the highest in seventy years; and in July, the average duration of unemployment continued its relentless increase.

If you count people who have given up looking for work plus those who are working part time but want full time jobs, 25.6 million people are unemployed or underemployed, according to Heidi Shierholz of the indispensable Economic Policy Institute.

That's a depression level of 16.1 percent.

What about the stimulus? The other day, I came upon a large sign in Lenox, Massachusetts in the Berkshires. It was on Route 183, which is undergoing road work, and the sign proudly declared, FDR style, "Project Funded by the American Recovery and Reinvestment Act." I pulled over to the side, cheered, and took a picture. 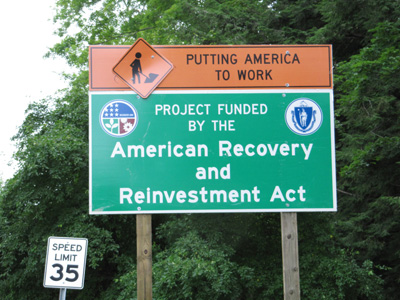 What surprised me, though, is that this is the first such sign I've seen after more than six months of stimulus (and it is in a very blue town, in the bluest of states.) I suspect the locals put the sign up. As I'm writing this, it's now Sunday and the town offices are closed, but I will inquire and report back in my next post.

But the paucity of such signs is a metaphor. The stimulus has put out, so far, about $100 billion in a more than 14 trillion dollar economy. Economists generally have credited the stimulus with adding between one and three percentage points to GDP growth, and saving or creating on the order of 500,000 to 700,000 jobs. That is nothing to scoff at; however, it needs to be kept in perspective.

As Floyd Norris recently reported in the New York Times, the economy has added virtually no net private sector jobs in a decade, an unprecedented record. The labor force is several million people larger than it was in 1999, but in that period the entire private sector has increased its employment by only 121,000 jobs out of 109 million.

So, while the stimulus kept things from being even worse, public outlay will need to do even heavier lifting before we get a real recovery. Compared with its pre-recession level, the economy now has a jobs gap of about 9.1 million jobs, according to EPI. Those include 6.7 million jobs lost since 2007, and 2.4 million jobs that would have been created and job-growth had followed its normal trend needed to absorb new workers and to keep the unemployment rate from rising. We are a far cry from even beginning this turnaround.

Also, as I write in a forthcoming column for the American Prospect, state and local governments continue to be in severe budget crisis, causing them to cut jobs and services and raise taxes in a recession, thereby sandbagging the recovery. All states except Vermont are constitutionally prohibited from running current deficits. As a consequence, they behave perversely when revenues fall (as they do in a recession.) All but two states (North Dakota and Montana) now face budget shortfalls, according to the Center on Budget and Policy Priorities. So while one level of government, the feds, is providing a net stimulus, other levels of government are adding to the economic undertow.

What's needed is Stimulus II. In addition to more jobs spending, it should include emergency revenue aid to the states (an idea as radical as Richard Nixon who first proposed general revenue sharing) as well as federalization of long term unemployment benefits.

When the second quarter unemployment numbers came out, a giddy David Leonhardt began his Friday front-page New York Times off-lead piece, "What if in the end they got it right?"

Suppose Bernanke, Paulson, Geithner and company really got the financial rescue about right? And suppose the Obama team got the stimulus about right, we averted a depression, and things are already reverting to normal?

Don't count those chickens yet. What if Wall Street got too much of the aid and Main Street too little? What if mounting home foreclosures continue to sandbag household net worth? What if we are in for a health reform in name only, a financial reform that leaves the casino model of crony capitalism largely intact, and a jobs recovery that leaves working Americans even more insecure than they were before this financial collapse?

What if Obama had a chance to be Roosevelt, and settled for being Clinton?


Robert Kuttner is co-editor of The American Prospect, a senior fellow at Demos, and author of Obama's Challenge.