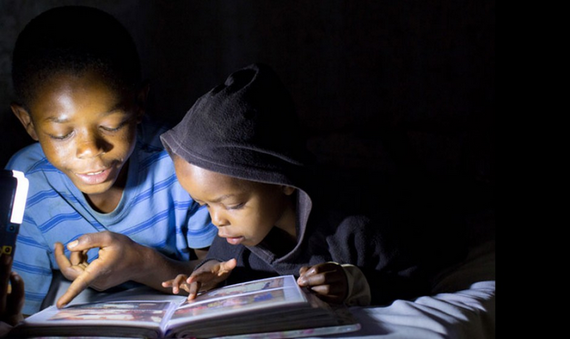 Investment in beyond-the-grid clean energy has been growing steadily, albeit with the world's foremost development institution, the World Bank, missing in action.

Last fall, the Sierra Club and Oil Change International published a scorecard evaluating major multilateral development banks on their energy access spending. The World Bank Group, of which the International Finance Corporation (IFC) is part, received a failing score in part because, over the course of three years, it only spent 25 percent of its energy access portfolio on beyond-the-grid solutions. 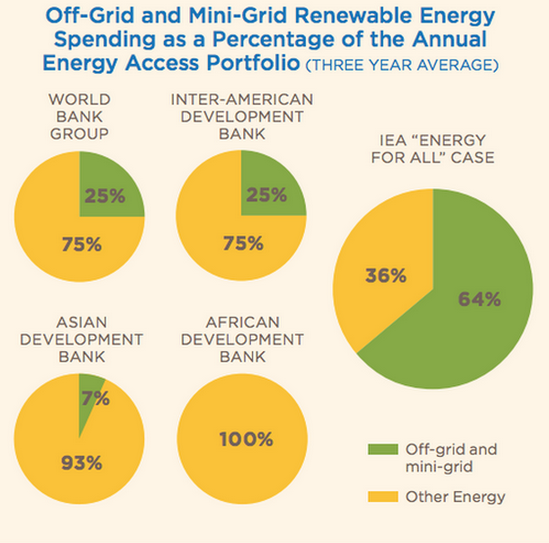 This week the IFC invested $4.5 million in Off Grid Electric, a leading solar leasing company in Tanzania that some consider the 'Solar City' of beyond-the-grid solar markets. Investments like the IFC's recent loan to Off Grid Electric could help pull up the World Bank Group's score for next year's report. But more importantly, the IFC will help unleash the investment needed to lift hundreds of millions out of energy poverty.

This investment by IFC is seen by the beyond-the-grid solar sector as a welcome, if overdue, move by the institution. Koen Peters of the Global Off-Grid Lighting Association said, "When leading advisers of the market such as IFC put their money where their mouth is, this will of course greatly help to increase confidence of other investors too."

The role of the IFC in this most recent investment cannot be underestimated. As Off Grid Electric's co-founder and CEO Xavier Helgesen explained in an interview, IFC's investment was "incredibly catalytic." IFC took the risk as the first major debt provider for Off Grid Electric and are therefore de-risking investment for the private investors that will follow.

"Our core thesis of our company is that a large group of African rooftops with solar panels is an investable asset with predictable cash flows," said Helgesen. "We have proven this at a small scale in a groundbreaking way with our equity investor's money, but couldn't scale that way. This is where IFC comes in."

Together with a loan from Cordiant Capital, the total amount raised was $7 million -- 8 percent of the amount raised for the entire sector in 2014. Yet another reason to believe that 2015 will be a breakout year for solar beyond the grid.

This investment is a major boost for the company, which provides prepaid solar energy via mobile money for those living in energy poverty. The company aims to reach 200,000 Tanzanian households by the end of 2015. To-date, the company has reached close to 35,000 households.

The IFC worked hard to cater the facility to Off Grid Electric, and the payoff to the company is immense: "Demonstrating we can draw debt from a AAA-rated institution and pay it back with interest through reliable payments from our customers is the most important proof point we can have as a company."

Other sources of public financing have also been significant to Off Grid Electric at critical points during its growth. Speaking of the influence of public finance on the sector as a whole, Helgesen stated, "I don't believe we would be where we are today without it."

Off Grid Electric has been the recipient of grants from the US-Africa Clean Energy Finance initiative of OPIC, U.S. Department of State, U.S. Trade and Development Agency, and USAID (all part of the Power Africa initiative); from the Africa Enterprise Challenge Fund; and from USAID's Development Innovation Ventures (DIV), a year-round, open competition supporting breakthrough solutions to development challenges around the world. Off Grid Electric is also a partner of the Beyond the Grid initiative of Power Africa.

Helgesen notes, "As we look to the next stage of our growth, the Beyond the Grid program will be central to leveraging the U.S. government's resources to help us scale faster and attract more private capital." Power Africa's Beyond the Grid sub-initiative leverages Power Africa's innovative transaction-focused model to galvanize further collaboration, engage in critical actions to accelerate transactions, and drive systemic reforms to facilitate future investment specifically relating to off-grid and small-scale energy solutions.

And let's be clear that the reason these investments are so important is because they truly make a difference in people's lives, enabling customers to pay less for energy than what they were spending on kerosene and for a solar product that is healthier and safer. These products are truly transforming lives.

Drawing on his observations, Helgesen pointed out, "Every child in that house will remember the day their parents got solar for the rest of their lives. They will also study longer every night and be healthier."

The future looks bright for companies like Off Grid Electric, especially since institutions like the IFC are starting to step up to bat. Financing, particularly unlocking long-term debt, is the piece that is needed in order to meet growing energy demand. If this is a harbinger of more to come from the IFC and the World Bank group, it could change the fate of the off-grid clean energy sector going forward.

As Helgesen explains, "All of our customers aspire to a modern lifestyle, and our mission is to deliver it to them. In 2020, I expect that home solar will be present in at least 25 percent of the households around the world that are presently off grid. It is simply too good of a solution to a huge number of customers to remain a niche product."