The International Monetary Fund (IMF) agreed to lend Iceland the funds it needed to support its rapidly falling currency and to permit international money transfers to return to normal after Iceland's financial collapse in October 2008. The quid pro quo was that Iceland would adopt the IMF's recovery program and repay the loans between 2012 and 2015.

According the IMF, its work to restructure Iceland's economy is already successful. "The crisis has led to a sharp drop in economic activity, but a late-year turnaround remains within reach," the IMF stated in a press release last month. "[T]he króna has stabilized and inflation appears to have peaked--indicating that the program is delivering results."

Indeed, Iceland's foreign minister reports that Barack Obama told him during the G20 conference that he wished to come to Iceland soon, because "although Iceland was the first country to go down, it will be one of the first countries to get up again."

If it's this easy to overcome a decade-long spending spree, why haven't the world's other struggling economies signed on with the IMF? Why are the countries that have accepted IMF assistance in the past--such as South Korea and Argentina--so bitter over the experience?

the modus operendi of the IMF is to "stretch out payments as long as possible, until you've already sold off your natural resources, you've already privatized your public domain and sold it off, you've already foreclosed on homes, and then at the very end of losing everything, then you realize you can't pay."

In each case, he says, "the government has, in effect, been turned over to the foreign bankers to run Iceland for their benefit, not for the benefit of the people." This goes against the basic premise of a liberal democracy, and the best solution is "to default, kick out the IMF, and withdraw from it."

John Perkins, author of The Confessions of an Economic Hit Man, was just as blunt: "The IMF is here to serve the corporatocracy ... not here to serve the Icelandic people." "In every case where countries have gone along with IMF policies, it's caused tremendous disruption."

As an example, he pointed to Iceland's aluminum foundries, the construction of which the IMF identified as the cause of Iceland's double-digit inflation. "Your biggest resource--energy--and these big aluminum companies have come in to take advantage of that your state-owned energy company is losing money. That's absurd! You're not only turning your resources over to these foreign companies, but you're losing money in the process." 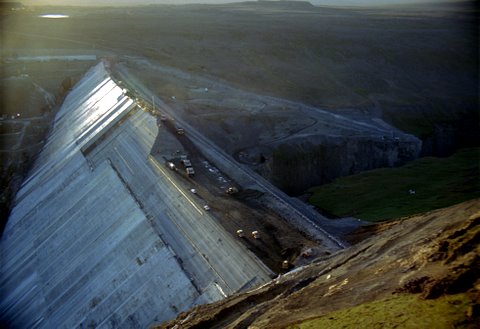 Kárahnjúkavirkjun, the largest dam in Europe - a mega project built by the Icelandic government in the pristine east fjords of Iceland to provide Alcoa with cheap electricity for an aluminum smelter.Photo credit: draumalandid.is

To prove his point that the IMF's entry into Iceland was a subterfuge for gaining control over the country's resources, he noted that the same people who imposed the IMF austerity programs on debtor countries, such as Larry Summers and Paul Volker, are now advising Barack Obama to expand the money supply, to engage in new spending programs, and to increase the social safety net.

Indeed, the IMF recommends that Iceland reduce its spending for social programs as part of its restructuring program, primarily by reforming the indexation of benefits to the elderly and to people without an income, and by reducing benefits to elderly, the disabled, students, and pregnant women. Iceland's saving banks have all failed in the past couple of weeks, and the unofficial unemployment rate is now in the double digits (despite the fact that many foreign workers have returned to their home countries, and some Icelanders have left for jobs abroad). The IMF's cuts would have drastic effects on the persons hurt the worst by economic crisis.

Both Hudson and Perkins stated that Iceland's best course would be to default on its massive foreign loans, as Argentina has done, and strongly assert control over its resources before they are taken away by foreign interests.

The Icelandic blogosphere was ablaze following the interviews, with most writers expressing shock, disbelief, and anger, or as one of the country's most popular bloggers, Lára Hanna Einarsdóttir put it, "viewers are probably in need of crisis counseling right now." Almost more demoralizing than the dreadful information set forth by Hudson and Perkins, however, was the reaction of Iceland's mainstream newspapers. The silence was deafening. Of the three papers, the largest one, Fréttablaðið, quoted the minister of finance, Steingrímur J. Sigfússon, stressing the „importance of protecting our natural resources," which „cannot remember how often I've pointed that out myself." Asked about the IMF agreement, Sigfússon said that revoking it is „out of the question," but it was important to be released from it as soon as possible. The conservative Independence Party's mouthpiece, Morgunblaðið, - not surprisingly - didn't even see a reason to mention the interviews.

Surely, it is not a coincidence that Iceland would be required to cede its claims to its exclusive 200-mile fishing zone as a precondition for its entry into the EU, that the Icelandic government has yet to publicly divulge the rates charged to Alcoa and Alcan for the electricity used to power their massive aluminum smelters, or that Iceland's attempts to use its geothermal and hydroelectric power to grow enough food in greenhouses to become self-sufficient have failed.

Although, as Mr. Perkins points out, the corporate interests have been known to use extreme measures--including assassination and military intervention--to ensure that debtor countries accede to their wishes, he also indicates that the world has caught on to what is happening. The Latin American countries have consciously avoided the corporate imperialism, and instead insisted that their resources be used to benefit their own people.

Let's hope Iceland does the same.