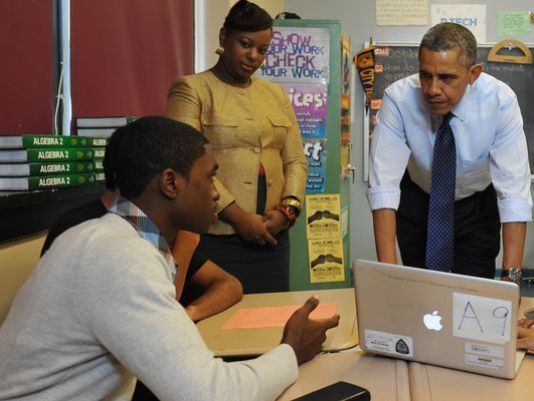 Popular news media including the Washington Post, The Atlantic, Slate, NBC News and others recently highlighted a report released last month from the Albert Shanker Institute focusing on The State of Teacher Diversity. One of the main findings that were widely reported was the number of Black teachers across several major cities declining between 2002 and 2012. What seems to be absent from the public discourse surrounding the report, and its conclusions, is a historical contextualization that this seems to be a recent phenomenon. Unfortunately, the data and history say otherwise.

This report concludes that contrary to public perception, there is not a dearth of minority teachers in predominantly minority schools. They even go so far as to cite the push to recruit more teachers of color (they prefer the term minority teachers) as "an unheralded victory." However, they are quick to point out that despite this victory, there is a persistent problem with teacher turnover due to dissatisfaction with their job in general, but especially in predominantly high minority student schools in low-income areas. In reading this conclusion, the question that I am stuck with is, is this a new phenomenon? According to the literature it is not.

As early as 1987 A. Gary Dworkin in the book Teacher Burnout in the Public Schools: Structural Cases and Consequences highlighted that during the later part of the 20th century, teaching became a minority female profession, especially in the major urban cities in the United States. Further, since the 1930s (when schools were still highly segregated by race, and many would argue class, research has shown that teachers (particularly Black teachers) have had a higher turnover and are more likely to be discouraged and quit than in any other profession. Couple these statistics with the research focused on the teacher shortages of the 1980s and 1990s (when Teach for America was created in part to curb these shortages), and it seems like there is a logical reason as to why the report highlights the fact that the number of Black teachers has "dropped."

The number of Black teachers has been an underreported, or unimportant statistical measure in education circles for decades.

What is even more egregious than the lack of a focused education policy highlighting this issue, are the headlines that imply there was ever a time in which a majority of Black teachers in public education existed. Tillman (2004) highlights that since Brown v Board of Education (1954), "desegregated" public schools, the number of Black teachers has been in constant flux. For this report to make it seem like the dearth of Black public school teachers in major cities is a new phenomenon is a charade. It is simply stating the obvious -- that since Brown, there have not been as many teachers of color in public school classrooms. Another important question this report raises, therefore, is not that there is a scarcity of teachers of color, but why?

As a society in general, and educators in particular, we need to delve deeper into the reported reason teachers of color leave which include paltry working conditions in already persistently dangerous, under performing, under funded urban public schools. What is also of interest is why; 1) these conditions are so prevalent, and pervasive in urban areas, 2) are consistent across the country so teachers or color regardless of whether they are in New York, Los Angeles or Chicago have steadily been leaving the profession at a high rate for decades. We are often so concerned about the lack of appropriate educational experiences for children in these schools, that we do not consider the employment conditions that might change our teacher recruitment and retention for true reform.

While I applaud the aims of this report (although, it is of note that there are very few, if any, authors of color in the report), what is clear is that it is at best illuminating a problem that has existed for decades, if not in the immediate aftermath of Brown, then soon after. The president and others who seek to create education policies aimed at retaining more teachers of color in the classroom cannot be mired in racial politics or division. As Randi Weingarten stated in the press conference for the release of this report, students, regardless of race, can benefit from teachers of color. What is needed however, and what is absent from at least the coverage of this report, if not the report itself, is a historical understanding that highlights that despite our best efforts, we can still do a better job of recruiting, training, mentoring and retaining all teachers, but especially teachers of color.

It is imperative that we do so.