Growing up, I loved to read Christian fiction. In high school the Left Behind series by Tim LaHaye and Jerry B. Jenkins was one of my favorites. One of the themes I recall in the series was that the evil powers of darkness would manifest in an enemy of Christ who would try to take over the world. I knew the books were about "the end times," but at that time, I didn't know any big theological terms like premillennial dispensationalism or the fundamental theological beliefs on eschatology (study of the end times) that informed the series.

For dispensationalists, biblical prophecies provide a map by which current world events can be deciphered and understood. Premillennial dispensationalism uses these prophecies as justification for backing of the State of Israel and support on behalf of Jewish restoration to the land. The Left Behind books rested heavily on this theological backdrop. While they were great stories, they scared me to death as I read about the anti-Christ and how the world might (fictionally) come to an end.

As an adult, I still love a good story, but I am a bit more grounded about the subtle agendas, often weak theology, and limitations of Christian fiction. (Although there are still some wonderful gems in Christian fiction, don't let my appraisal deter you!)

If you haven't read the series or it has been a while, the summary of the second book published in the Left Behind series, Tribulation Force, sums up this major story line:

"Rayford Steele and Cameron "Buck" Williams find themselves pressed into service for the man they believe could be the Antichrist. Nicolae Carpathia takes over the United Nations, signs a peace treaty with Israel, and begins to lure the nations of earth together to form one global village. As believers band together following the Rapture, their peaceful world is destroyed again when global war erupts." 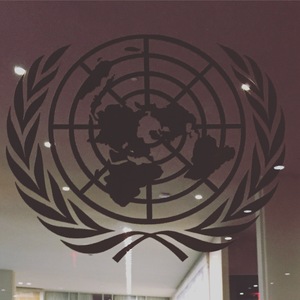 Nicolae Carpathia is believed to be the anti-Christ; and the United Nations is the world body that manifests this evil incarnate. Thus reveals one of the biases of the series, and many who hold to similar beliefs about the end times: The United Nations is evil and acts against the will of God.

While there are many positions and actions of the United Nations that I do not fully endorse, I absolutely do not buy into the vitriolic assumption that the world body of global leaders is evil. I take to heart the words of Scripture in 1 Timothy 2:1-2: "I urge, then, first of all, that petitions, prayers, intercession, and thanksgiving be made for all people - for kings and all those in authority, that we may live peaceful and quiet lives in all godliness and holiness."

On October 14, 2016, two courageous Jewish voices each gave important and historic speeches before the United Nations Security Council on the issue of Israeli settlements in the occupied Palestinian territories (oPt): Hagai El-Ad, executive director of Israeli human rights organization B'Tselem, and Lara Friedman, director of policy and government relations for Americans for Peace Now (APN). The issue they were addressing is the building of Jewish Israeli homes (settlements) on land in East Jerusalem and the West Bank - territories designated to be the future place of a Palestinian state. Even the United States, which has incredibly favorable policies towards and is an ally of the state of Israel, identifies this land on which the settlements are built as occupied Palestinian territory.

Since the peace agreement called the Oslo Accords were signed in 1993, the settler population in the West Bank, including East Jerusalem, has more than doubled and over 50,000 new settlement units have been built, 11,000 of them between 2009 and 2015. The New York Times reported last year that the settlement population in the West Bank alone had exceeded 350,000. Nearly 200,000 additional settlers live in East Jerusalem; which Palestinians believe should be the capitol of their future state, but Israel has annexed and identified as its capitol. No country in the world, including the United States, has its embassy in Jerusalem; indicating the global contention around the annexation of Jerusalem.

The damage and devastating effects of the settlement enterprise are well documented. In addition, US policy dating back to the 1970s has called on Israel to leave the land in East Jerusalem, the West Bank, and Gaza for the Palestinians. 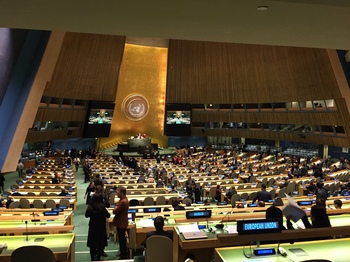 Inside the United Nations

Lara Friedman is an ardent supporter of the state of Israel. In her statement delivered to the United Nations Security Council at the Arria-formula meeting on settlements, she addressed how difficult it was for her to speak critically of Israel by calling to the world's attention their human rights violations and their current policies for settlement expansion and encroachment. Friedman asserted that these settlement policies "undermine the chances of peace." She concludes:

"Whether a peace agreement is possible at this time or any time soon can be debated endlessly. What cannot be debated is the fact that Israel is a vibrant democracy that has achieved great things in its short existence, and that has the potential for a great future. And what cannot be debated, likewise, is that the settlement policies of the Israeli government are undermining that democracy, distorting the noble Jewish values articulated in its Declaration of Independence, harming Israel's relations with the world, violating the rights of the Palestinians, and killing the chances of ever achieving Israeli-Palestinian peace in the future."

As an Israeli human rights activist, Hagai El-Ad implored the United Nations to "take action" and hoped that his statement would "move" the international body toward greater activity in responding to the almost 50 year occupation of the Palestinians. He spoke about daily life living under military rule. El-Ad summarized his critique:

"Israel has systematically legalized human rights violations in the occupied territories through the establishment of permanent settlements, punitive home demolitions, a biased building and planning mechanism, taking over Palestinian land and much, much more."

His statement was moving and disturbing. El-Ad emphasized the urgency of his plea:

"The realization of human rights need not wait any longer. Palestinians have the right to life and dignity, the right to determine their own future. These have all been delayed for far too long - and justice delayed is justice denied."

After facing severe critique within Israel, El-Ad wrote an op-Ed in the Israeli newspaper Haaretz explaining why he spoke out against the occupation of the Palestinians. He said, "I spoke... against the occupation because I am striving to be a human being. And human beings, when they take responsibility for an injustice against other human beings, have a moral obligation to take action." Such is El-Ad's call for justice.

In Christian tradition, one of the most well-known Scripture passages is Micah 6:8: "He has shown you, O mortal, what is good. And what does the Lord require of you? To act justly and to love mercy and to walk humbly with your God."

What does it look like to respond to the damage and devastating effects of the settlement enterprise? This past week, I led a discussion with Lara Friedman and two other experts on the Middle East - Mitchell Plitnick, of Foundation for Middle East Peace (FMEP) and Jim Zogby, of the Arab American Institute (AAI). You can view our discussion: "Prospects for Peace: Obama's Last Stand and Opportunities in the New Administration." Numerous organizations, including Churches for Middle East Peace (CMEP) are calling on President Obama and Ambassador to the United Nations, Samantha Power, to take a strong stand in the United Nations Security Council against settlements. You can learn more about these efforts here. I hope you will join us.