In the Mexican border town of Nogales, I sat finishing my lunch when Alma, a Sonoran friend who had been watching the diners, spoke quietly: "That's something you would never have seen a year ago -- Mexican men eating salads." It was, she explained, because of the rising awareness of diet-related health problems in Mexico, especially those linked with the epidemic of obesity. She added that it wasn't so long ago when ordinary people could not afford to eat salads or a variety of fresh produce so vital to a healthy diet.

I was visiting the twin towns of Nogales (Arizona) and Nogales (Sonora) in the company of my hosts Bob Phillips, of the Border Community Alliance (BCA), and Alma Cota de Yanez, of the Fundación del Empresariado Sonorense A.C. (Foundation of Sonoran Businesses, or FESAC). 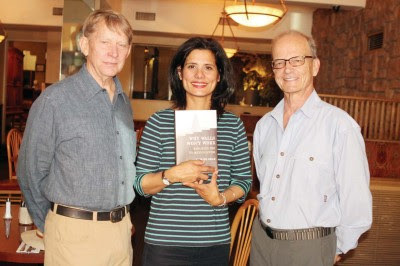 The two organizations work together creatively to promote cross-border connections. I've been to the towns on previous occasions, both before and after the massive boundary fortifications were constructed by the US Department of Homeland Security (DHS). Today Mexican Nogales, known formally as Heroica Nogales, is booming and I wanted to catch up on what had been happening. By the end of my visit, I was convinced that the US is falling perilously behind Mexico in terms of borderland economic investment, growth and development.

How the borderland twin towns were created
The practice of establishing pairs of settlements directly across from each other at the boundary line became customary after the 1848 Treaty of Guadalupe, which marked the end of hostilities between the two countries. When one nation built a town or a fort, the other quickly followed suit, primarily to monitor encroachments on national territory and to control border traffic. In 1882, Nogales and Heroica Nogales were founded simultaneously during the expansion of railroads along the US-Mexico border.

So closely-related were the twin towns that they took identical names and immediately became known as Ambos Nogales, or 'Both Nogales.' Like most border towns, Ambos Nogales had a quarrelsome history of co-habitation. After 1848, an enterprising saloon-keeper incorporated the official boundary marker (then nothing more than a pile of stones) into his establishment wall, making it a simple matter for locals with nefarious purposes to enter the saloon on one side and exit from the other into a different country! This led the US to impose a setback rule prohibiting construction within 60 feet of the line. Today, when the DHS began building walls to sever the twin towns, residents were doubly angered because the opaque structures not only hindered access but also prevented their seeing through to the other side. In protest, Mexicans began throwing rocks over the walls, becoming such a dangerous nuisance that a new fence design incorporating windows was introduced. 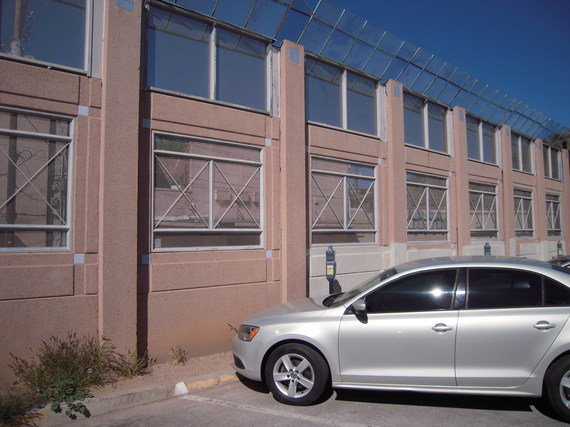 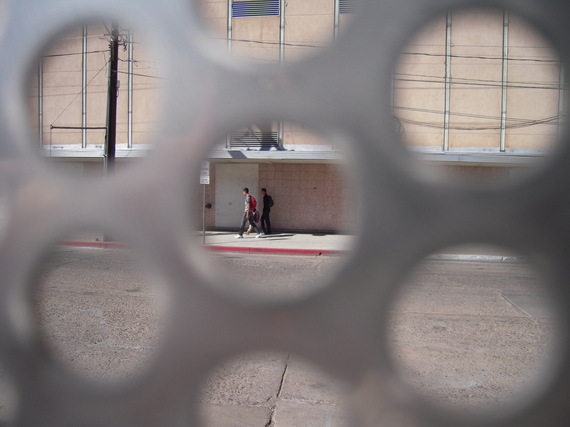 
By the end of the 20th century, Heroica Nogales had become an industrial and demographic growth machine of close to a quarter of a million people, most of the growth occurring after 1990. Meanwhile, Nogales (AZ) remained a sleepy burb of under 20,000 residents mostly of Mexican origin. Cross-border relations were generally cordial, but the harmony was constantly undermined by matters over which locals had little control. Recently, for instance, resentment in Heroica Nogales was kindled by the fatal shooting of a Mexican youth by an US Border Patrol officer, and the current rush of immigration into Texas by child refugees from Central America has stretched the resources of local agencies on both sides along the line.


Baja (or Lower) Arizona looks south
Arizona has a justly-warranted reputation for being a conservative state, but border-adjacent, Tucson-centered southern Arizona is very different from the Phoenix-centered north. In the south, there are strong ties with Mexico, including long-established traditions of providing sanctuary for border-crossers. Nowadays, southerners readily refer to Arizona as a "police state" because of the US government's intense militarization of the borderlands. The south is so different that it is frequently referred to as 'Baja (or Lower) Arizona,' making a nominal connection with the Mexican state of Baja California. Tucson-area people use the name 'Baja Arizona' with pride; it was first used by leaders of a secessionist movement decades ago, but is now in more general informal usage.

From Tucson south to Nogales, along the famed Santa Cruz River Valley, there are mountainous areas of astonishing natural beauty and great historical significance, sweeping agricultural valleys and enormous copper mines. It's also home to the Titan Missile Museum, a legacy of the Cold War. Just south of Tucson, Green Valley is a collection of retirement communities that together already exceed the population of Nogales, AZ.

People in Green Valley are understandably concerned to protect the well-being and prosperity of their communities, and they still worry about immigration and the drug cartels Ironically, I attended a community meeting where concerns were expressed about the (legal) opening of a marijuana production complex in a rural area. Opponents pointedly made clear that their objections had nothing to do with marijuana; they simply wanted better land use zoning. The facility raised ire because of the intrusive security apparatus that accompanied it: high walls, stadium lighting, razor wire and 24/7 security guards.

Growth-related disputes aside, it's easy to get the impression that life in Tucson, Green Valley and smaller towns such as Tubac, is good. Things may be fairly quiet, but in this heat nobody moves very quickly. But when you cross the line into Mexico things start to speed up.

Heroica Nogales: explosive growth, urban sprawl
Cross-border visitors from the US usually find the downtown of Heroica Nogales (el centro) a bit run down. Yes, the usual hawkers peddle the gringo experience: cheap dental care, glasses and prescriptions and maybe a good time. But the whole centro zone is hemmed in by the steep hillslopes of the Santa Cruz River valley, which hinder redevelopment opportunities. The downturn in the US economy and prolonged wait times at the border crossing have added to the decline of cross-border tourism.

The main story of growth and development in Heroica Nogales is a few miles south, where the city has room to expand, around and beyond the intersection of two principal highways, the Camino Liberamiento and the Avenida Lopez Mateos. Since the mid-1960s when the Mexican government introduced its Border Industrialization Project (BIP), this has been the principal locus of explosive growth in assembly plant industries (the maquiladoras). Today, maquilas spread over the landscape like an endless carpet, accompanied by vast housing subdivisions intended for maquila workers but also attractive to many who move to Nogales simply to grab any opportunity for home ownership. 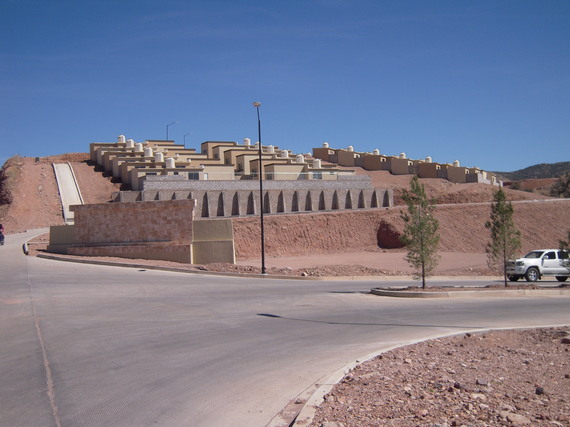 Large shopping centers have also multiplied, as have branch campuses of regional universities. A major freeway connected to Hermosillo (capital of the state of Sonora) and Guaymas (the state's main port) languishes at the city's edge because it still lacks a connection on the US side.

Infrastructure investments by Mexico's federal government (such as the BIP) have played a pivotal role in transforming Heroica Nogales and many other Mexican border cities, which have streaked ahead of their US twins in terms of population growth and economic development. As a consequence, places that once were way-stations for migrants en route to the US are now destinations in their own right. These days, Mexican migrants travel to border cities not to cross over, but to put down roots.

Matching Mexico's vision, or blindly building more walls?
Growth across from our southern boundary poses major challenges that are only tangentially related to US obsessions with border security, drugs and immigration. The US is more or less keeping up with Mexico in providing efficient cross-border transportation connections that are vital to national and local commerce. Mexico is our principal trading partner, and our governments respond to pressures by opening new ports of entry or expanding the capacities of existing ports. Beyond this, however, a deadlocked Washington DC invests mainly in expanding the security apparatus connected with the Border Industrial Complex: more boots on the ground, eyes in the sky, fences and interior checkpoints (which Arizonans especially detest). Such expenditures amount to billions of dollars, but they don't add up to a strategy for aiding national or local economic development.

In the past, the US has implemented effective borderland infrastructure planning, especially in the case of water resources. But in terms of economic and community development, the country now is simply not keeping up with Mexico's vision for the borderlands' future. Left unattended, this blind spot in US policy could have several deleterious consequences including: hindering and even rupturing the flow of trade between the two nations; increasing traffic congestion and pollution costs on both sides, together with their associated public health problems; and exacerbating bi-national resource cooperation in energy resources and water-sharing protocols. Continuing US neglect of borderland infrastructure would also jeopardize existing private and public investments and labor markets in Mexico's border cities.

I'm not claiming that Mexico has everything worked out on their side of the border. For example, FESAC's Alma Cota warns that without simultaneously developing the necessary community and social infrastructure (including local shopping and schools), emerging communities in south Nogales risk replicating the problems of the worst neighborhoods in Ciudad Juárez -- crime, violence, drugs and abandonment.

For now, the prosperity of southern Heroica Nogales is palpable. An economic, demographic, social and political juggernaut is developing right across from our southern boundary. Mexican governments invest in communities and infrastructure. Opportunities for jobs and homeownership draw newcomers to the city's southern edges. Mexican men eat salads. For its part, the US continues to prioritize spending on border security, while responding piecemeal to the imperatives of trade. The situation in this country is emblematic of our poisoned politics and contorted logic: we build walls to keep Mexicans out at the same time that we build new gates to allow more Mexicans in.