Todd Stern, the U.S. Special Envoy for Climate Change, was in my neck of the woods the other day. Speaking at Dartmouth College, an hour's drive from where I'm spending a quiet vacation with my family, he said something so disturbing that I was compelled to dust the beach sand off my feet and respond.

The speech started off so well. His description of the climate crisis was unflinching:

Whether we look at the steady increase in global temperature; the buildup of greenhouse gases in the atmosphere to the highest level in a half-million years; the march of warmest-ever years (9 of the 10 hottest on record have occurred since 2000); the dramatic shrinking of mountain glaciers and Arctic sea ice; the accelerating rise in sea level; or the acidification of our oceans; the tale told by the evidence is consistent and it is compelling.

These things matter. They warn of droughts and floods and extreme storms. They warn of water shortages, food shortages and national security risk. They warn of what 11 retired generals and admirals wrote about in 2007 -- climate change becoming a "force multiplier for instability in some of the most volatile regions of the world." And they introduce the threat of catastrophic, non-linear change."

And his reference to climate denial was spot on: "Climate change has long been a partisan issue but when you see a parade of conservative candidates publicly recanting the apostasy of having acknowledged that global warming is real, you know you've entered Wonderland." 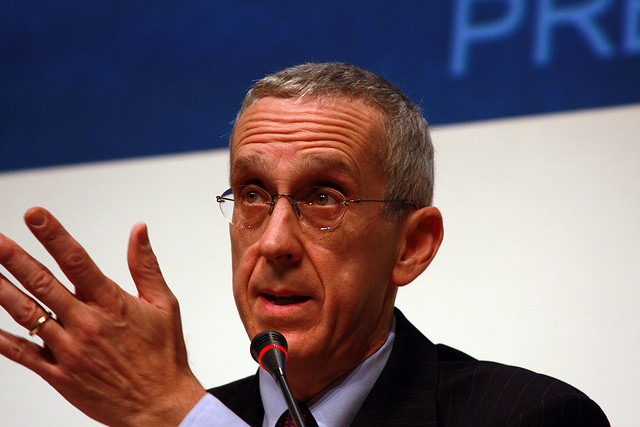 When his speech turned to the international climate negotiations, however, he followed them right down the rabbit hole.

Like the Stephen King beach-reading thriller I set aside to write this piece, a touch of foreshadowing hinted at what was to come. His reference to the to the failure of the Copenhagen climate conference -- which quite literally could have changed the course of history -- suggested that we were somehow wrong to have expected our leaders to effectively address the threat that he had so eloquently just described: "Copenhagen is remembered for its chaos, for the spectacle of world leaders improvising an agreement in the final hours to avoid meltdown, and for the dashing of over-inflated expectations." [My emphasis added.] It's worth recalling that U.S. obstructionism was one of the reasons for the near-meltdown.

Then he dropped the bombshell:

For many countries, the core assumption about how to address climate change is that you negotiate a treaty with binding emission targets stringent enough to meet a stipulated global goal -- namely, holding the increase in global average temperature to less than 2° centigrade above pre-industrial levels -- and that treaty in turn drives national action. This is a kind of unified field theory of solving climate change - get the treaty right; the treaty dictates national action; and the problem gets solved. This is entirely logical. It makes perfect sense on paper. The trouble is it ignores the classic lesson that politics -- including international politics -- is the art of the possible.

The 2°C goal, which he later equated with "old orthodoxies," is the threshold beyond which climate change could have truly unforeseen and catastrophic consequences. Many scientists and more than 100 governments argue that even a 2° rise in temperature is highly dangerous, and are calling for a global goal limiting temperature rise to 1.5°. To understand the significance of these numbers, read Bill McKibben's plain truth about the terrifying math of climate change, published in Rolling Stone last month.

Stern suggests that we abandon the 2° goal in favor of actions which are politically possible, whatever that means in the polarized context of the climate wars. Yet even he acknowledges that "this kind of flexible, evolving legal agreement cannot guarantee that we meet a 2 degree goal." In other words, half measures are better than nothing. And the threat of runaway climate change? No problem I guess; we can just leave that to the next generation to deal with.

In making his speech at a college event rather than in a formal negotiating setting, Stern may have been testing the waters to see whether the idea would float. Or it may signal a firm change in the U.S. negotiating position going into the next round of climate negotiations in Doha at the end of the year. The reactions to the speech by the European Union and the Association of Small Island States were scathing, but whether their opposition will be sufficient to stave off a U.S. course change remains to be seen.

U.S. negotiators will undoubtedly float the idea in deeper waters at informal talks in Bangkok later this month. If they succeed in getting the 2° goal dropped, we will all find ourselves in deep water indeed. And if left to the U.S., we'll be paddling with tennis rackets. Even Stephen King couldn't make this stuff up.

Update (12:44PM EST, 8/8/2012): I received the following message from Wendy Nassmacher on behalf of Todd Stern in reaction to my post:

There have been some incorrect reports about comments I made in a recent speech relating to our global climate goal of holding the increase in global average temperature to below 2 degrees Celsius. Of course, the US continues to support this goal; we have not changed our policy. My point in the speech was that insisting on an approach that would purport to guarantee such a goal -- essentially by dividing up carbon rights to the atmosphere -- will only lead to stalemate given the very different views countries would have on how such apportionment should be made. My view is that a more flexible approach will give us a better chance to actually conclude an effective new agreement and meet the goal we all share.

My response, to which I have not yet received a reply:

Thanks for sending me this clarification. I don't agree that my reporting of his speech was incorrect -- I was working from a transcript of his speech, and the clarification below essentially confirms his original statement and my (and others') interpretation of it. In essence, he is saying that we are more likely to achieve the 2° goal if we don't force the hard decisions needed to get us there. Given that existing pledges and policies (a flexible approach if ever there was one) are taking us towards a 3.5° world or higher (see: http://www.climateactiontracker.org/), there is no evidence to support his thesis. It would appear that the US interprets the 2° goal as aspirational, rather than as a firm commitment based on a scientific imperative. And this, I'm afraid, is tantamount to giving up.