Apple has been called "the world's most secretive company." It creates great products but has a terrible reputation as a corporate citizen. It seems to hoard its intellectual property. It's sitting on $160 billion of cash reserves, and is a philanthropic miser. Foxconn, the high-profile electronics company that builds Apple's iPhone and other products in China, has been in and out of the headlines for poor working conditions, worker riots at its Taiyuan factory and a series of employee suicides.

Although employees at Apple and Foxconn are treated very differently, the two companies are known for keeping their workers and others in the dark. Yet both are enormously successful, causing many people to question whether the popular management advice in favor of "openness" actually makes business sense.

I was reminded of this when speaking at the TED Global conference. The conference's theme was radical openness, an idea I helped develop a decade ago in a book I co-authored with David Ticoll called The Naked Corporation. We argued that both transparency and sharing of intellectual property can pay off.

The main criticism of both the book and my talk was "What About Apple? The world's most valuable company succeeds by doing the opposite of what you recommend."

But when you look closely at Apple, the company is not what it appears to be. Parts of Apple are very open. And under the leadership of Tim Cook, Apple has become more open in a number of areas, and the pressures of market forces are forcing it to open up even further. It may even become a good corporate citizen and provide leadership for a new stakeholder model of the enterprise.

To begin, Apple is more transparent than one might think. Like all companies it has four major stakeholders: customers, employees, business partners and shareholders.

Apple is obviously super-secretive with its customers about product announcements. And at the moment it can get away with this behavior because it so powerful in the niche markets in which it operates, and it has a small array of products. But as it tries to expand its share of the corporate market, business customers will demand to be well briefed regarding Apple's intentions and its product road maps.

Apple's customers aren't alone in being kept in the dark; the company treats its employees the same way. The vast majority of them have few details about what is in the company's product pipeline. But such opacity does not derive from some inherent benefits of closed work systems. Rather it is purely in aid of ensuring secrecy of its product strategy with customers.

Apple doesn't want its workers leaking information to the media or blogosphere. But increasingly Apple pays a price for this employee secrecy. It doesn't get the serendipitous collaboration across company silos that many other businesses enjoy. That among other things could have prevented the premature release of defective mapping software on the iPhone 5. Think of Google and how its workers are encouraged to dream up new products.

In terms of its supply chain, Apple itself has huge transparency and visibility. It can see down through Foxconn all the way to suppliers two levels below. True, this visibility had not extended to the rest of the world, but in this age of transparency Apple can no longer keep its supply chain practices secret.

As a result, everyone knows about Foxconn's labor relations and how its factories are run under tight security and employees are treated and compensated poorly. This is an enormous problem for Apple, not just for its reputation, but also the disruptions such working conditions can cause in the supply chain. So as Apple becomes naked it is being forced to get buff -- to clean up its supply chain practices.

As for transparency with its shareholders, Apple is actually very open -- respected as being one of the best companies on the planet for providing shareholders with pertinent information. The only area in which it had been faulted is whether it had been sufficiently candid about Steve Job's declining health.

Paradoxically, Apple's success is largely due to another kind of openness. The iPhone or iPad are nice pieces of hardware, but that's not what created their market success. But by opening up what are called "application programming interfaces" Apple has enabled its customers and the world of software developers to build apps on its platform. In this sense Apple's corporate borders are quite open and porous. It is a design and marketing company at the heart of an enormous business web of suppliers and software developers -- based on openness.

To be sure, Apple is obsessed with guarding its intellectual property and has sought refuge in outmoded intellectual property laws and in courts that today stifle innovation in our economy. But increasingly this comes at a cost, too. Android, the open-source software platform developed by Google, quickly became the dominant operating system in the mobile marketplace. Open-source software stimulates creativity and attracts attention, and over time openness tends to win out in the market.

Google was smart to release the Android software's inner workings so that manufacturers could tweak the operating system to their specific devices. Other companies have made equally smart moves. IBM gave away $400 million worth of software to the open-source Linux movement and in exchange received billions of dollars in savings and new business.

Apple also has failed miserably in terms of sharing within society and the global community. It is not only sitting on mountains of cash but during the Jobs era made little effort to be a good corporate citizen and reach out to the larger community. It has long provided lower-cost computers to schools and universities, but purely as a marketing strategy, and otherwise has done little to help America's education system. It has been a philanthropic miser and has declined to take part in important social partnerships.

With Tim Cook now having been CEO for three years, Apple seems to be increasingly aware that in the long term, business cannot succeed in a world that's failing. It has started to make more donations and is joining social causes, which will prove popular with its customers, especially with young people who increasingly want to do business with companies that behave well.

In fact Tim Cook's recent outburst at Apple's shareholder meeting clearly indicated that the company cares about more than just making money for its shareholders. He told attendees that "If you want me to do things only for ROI reasons, you should get out of this stock."

The conclusion is that Apple became the world's most valuable company for a number of complex reasons, including the design genius of its brilliant founder. But when you look under the surface, it is more open than you might think, and there is no real evidence that its secrecy has helped it succeed. And increasingly as it comes under more intense competitive pressures, and perhaps a set of values from Tim Cook, Apple will become an even more open company. 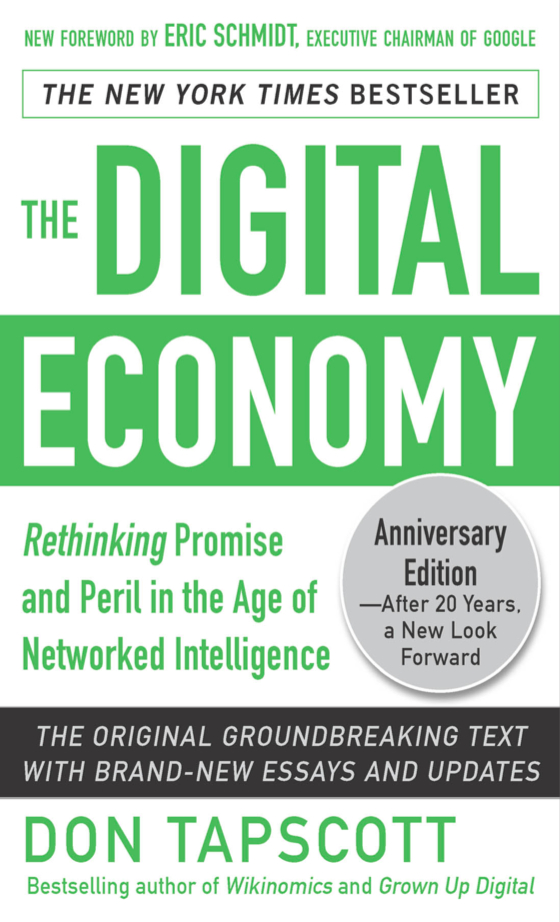 This is the third piece in a series based on The Digital Economy, 20th Anniversary Edition by Don Tapscott, released October 24, 2014.

Don Tapscott is the author of 15 books and rated by Thinkers50 as one of the top five living business thinkers in the world. He also plays keyboards in the band Men in Suits.