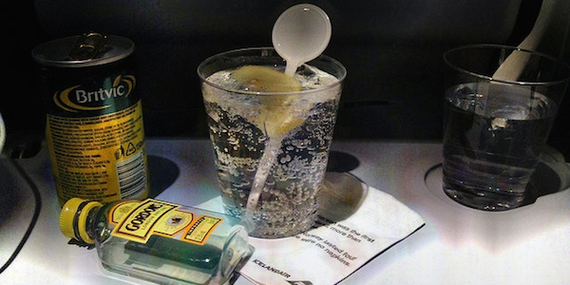 Since I'm under 21, legal drinking is one of my favorite parts about traveling abroad. But what if you want a drink in international airspace?

Drinking ages vary from country to country. Since I fall into the awkward "old enough to vote but too young to drink" group, a trip abroad means new freedoms when it comes to the beverage menu. Especially when all the international airlines seem to like to keep the good stuff going.

But there are exceptions, depending on where the plane is leaving from. Some flyers from a bodybuilding forum (hey, everyone loves to travel) report that airlines will follow the origin country's rule. So even if you're on Aeromexico going to Puerto Vallarta from Los Angeles, you might not be able to drink booze on the outbound but would be able to on the return trip. At least you get to somewhere, right?

This is where things get wishy-washy. Based on reports from TripAdvisor and Yahoo discussion forums and this Los Angeles Times article, international flights may not be very strict about checking IDs and a flight attendant's judgment is more likely to determine whether or not you can drink rather than any written policy (this is why it's important to be nice!). Even if an airline claims to serve alcohol to passengers over a certain age, the actual follow-through may be loosely regulated.

To this, I can certainly testify. Last spring when I flew Avianca Airlines from Nicaragua back to the U.S., the flight attendant not only failed to I.D. me but instead offered me alcohol without any question. I'll have to follow this up when I fly out of Los Angeles with Air New Zealand in February.

This isn't to say that underaged people should hop on a plane expecting to get wasted before landing. Nevertheless, if you're under 21, it seems there is little risk in asking for a drink on certain carriers. What do you have to lose? Aside from a little bit of dignity if the flight attendant refuses to serve you.

Sydney Johnson is an editorial intern.