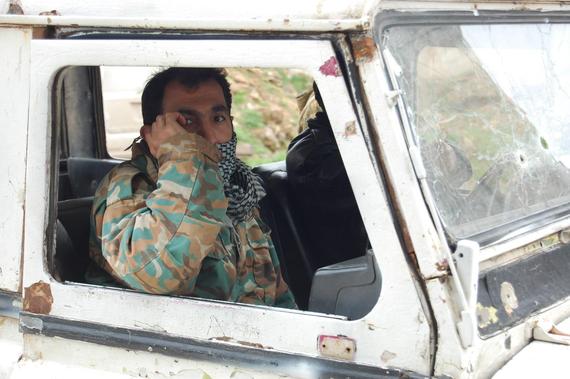 In 1998, the Kosovo Liberation Army (KLA) was, "without any question a terrorist group" according to Robert Gelbard (then United States envoy to the Balkans). However, within a year, the West warmed to the KLA; in June 1999, NATO signed an agreement with KLA to demilitarize, stating at the time, "the international community should take due and full account of the contribution of the KLA during the Kosovo crisis and accordingly give due consideration to its proposals for current members to participate in the administration and police forces of Kosovo, enjoying special consideration in view of the expertise they have developed."

The Syrian conflict's negotiating table is set once more for 23 February 2017. The United Nations' envoy Staffan de Mistura announced on Monday that efforts would continue to find a solution to the nearly six-year-old war in Syria that has killed more than 310,000 people. The new peace negotiations, backed by Russia, Iran and Turkey, aim to improve on the Astana meeting held last month. The resumption of negotiations was due to begin three days earlier - on the 20th, but the Syrian Opposition, made up of a number of key players in the fight against Bashar al-Assad, failed to agree on the makeup of its delegation to the fresh round of talks. The delay prompted de Mistura to warn the opposition that he would pick their delegates himself if they could not decide on time.

The announcement of the opposition's 21-member delegation unsurprisingly left Jabhat Fatah al-Sham (better known by its former alias 'Jabhat al-Nusra') off the list of attendees. The Islamic State and al-Nusra are the only opposition groups banned from Syria's peace talks and are excluded from the cessation of hostilities while other groups (such as Faylaq al-Sham and Ahrar al-Sham) who are ideologically and militarily aligned with al-Nusra, have been allowed to participate. As al-Nusra is one of the largest and most powerful groups fighting in Syria, their exclusion from any non-violent process to end the war does not give hope that these fresh talks will lead to a lasting peace agreement for the Syrian people.

While there is no doubt that there are certainly violent and anti-democratic segments within al-Nusra, there is also evidence suggesting fluidity to the groups ideology. Unlike ISIS, who opposes all who refuse to swear allegiance, al-Nusra has approached their fight against the Syrian Government pragmatically, often aligning themselves with Western-backed rebel groups where necessary. Equally, the Free Syrian Army - seen by many in the West to be moderate, has at times utilized al-Nusra's fighting power in their war with Bashar al-Assad.

Participation by al-Nusra in the upcoming UN-coordinated talks is largely untenable because the United Nations Security Council designated the group a 'terrorist organization'. It is clear from discussions which took place in New York this week at the 7882nd meeting of the Security council that al-Nusra remains as a perceived threat to international stability - it was singled out by several country representatives for condemnation. Furthermore, it cannot be ignored that Amnesty International and other international human rights groups have accused al-Nusra of War Crimes, including suicide bombings, torture and summary executions.

Seeing al-Nusra at the negotiating table would certainly be a hard pill to swallow for many in the international community. However, this does not mean that al-Nusra must sit on the sidelines of negotiations indefinitely - designated terrorist groups frequently make the transition to negotiating table. In 2001, the idea of talking to the Taliban was unthinkable but this slowly moved to the fringes of political acceptability before gradually seeping into official thinking and later being sanctioned and adopted by the highest level of government in many states. Similar evolutions in relations have occurred with the ANC in South Africa, FARC in Columbia, MILF in the Philippines, and the PLO in Lebanon.

A 2006 study of 648 terrorist groups existing since 1968 found that most groups ended their conflicts by transitioning into the political process through a negotiated outcome - a far more common result than a military or policing outcome. Indeed, despite the decades-old rhetoric that the US "does not negotiate with terrorists," Nixon, Regan, G W Bush, and Obama all negotiated with groups accused of terrorist acts.

We may currently be witnessing a transformation by al-Nusra in an effort to join the political process. The rebranding of al-Nursa to Jabhat Fatah al-Sham is likely an attempt to distance them from the al-Qaeda leadership - to whom they swore allegiance to in 2013. In July 2016, al-Nusra's leader Abu Mohammed al-Jolani vowed to have "no links whatsoever with foreign parties" in the hope that this will lead to a reduction in coalition airstrikes on their positions - which have put the group under a lot of pressure militarily.

However, US officials are skeptical of the change, dismissing it as a "public relations move". Notably, further statements from the US did not rule out changing their future position on the group (Jabhat al-Nusra is currently listed as a Foreign Terrorist Organization by the US): "Whether or not they are actually separating from Al Qaeda, that remains to be seen...we judge a group by what they do, not by what they call themselves" State Department spokesman John Kirby said last year.

Al-Nusra's rebranding may also be more than in name only as its goals have been narrowed in the five years since its formation. Al-Nusra now contends that its only goal is to "liberate the Syrian people" by overthrowing Bashar al-Assad, a goal shared by many Western governments, including the UK and US. The move by al-Nusra to distance itself from al-Qaeda's global outlook is calculated and not without precedent; in the past, the US has refrained from designating groups as Foreign Terrorist Organizations where their activities do not extend beyond their local arena and more importantly, do not threaten US interests.

Negotiating with all sides to armed conflicts has been recognized as a critical aspect of protection of civilians. Not to mention that a peace agreement which is inclusive of all opposition groups in the Syrian conflict would also pave the way for the defeat of ISIS - according to new UN Secretary General Antonio Guterres. It remains to be seen whether al-Nusra can become a viable negotiating partner - certainly, a further transition is needed to prove this possibility but the Syrian people deserve every effort to bring them to the table.