Are extraterrestrials using the moon to watch us from hidden bases?

One might jump to that conclusion after looking at an image (seen above) spotted by YouTube poster wowforreeel. Using Google Moon imagery, wowforreeel scanned the far side of our celestial neighbor and reported seeing and capturing the image of what appears to be a huge V-shaped or triangular object that has two rows of seven lights.

At first glance, it certainly appears a bit too symmetrical for a natural object. Some Internet sites have speculated that this might be either an alien spaceship, a base used by aliens from which to study Earth, or that it could even be a top secret moonbase created by humans.

The unusual object -- photographed by NASA's Clementine spacecraft, launched in 1994 -- measures approximately 500 feet x 420 feet, and is located near the region known as Mare Moscoviense. Using the actual Google Moon coordinates of the object -- 22º42'38.46"N and 142º34'44.52"E -- Huffington Post checked it out for ourselves. Once we arrived at the exact location, we decided to spread out and see if there were any other similar objects nearby. 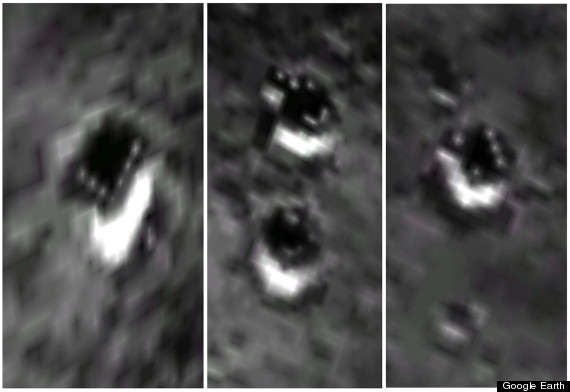 In the image above, at the far left is the original object that can be seen in the Mare Moscoviense region on the far side of the moon. It's the same object shown in the composite image at the top of this story.

The other objects here were found by HuffPost while maneuvering around the moon's surface with the Google Moon viewer. While not as perfectly symmetrical as the original object's seven lights, these others are, nonetheless, as intriguing to look at.

So, what exactly are we seeing here?

"I would suspect, from looking at it that [the original] object is a stitching artifact from Google Moon," said Marc Dantonio, chief photo and video analyst for the Mutual UFO Network.

"A stitching artifact is a photographic anomaly that occurs due to the process by which many photos are aligned and put together to make a large photo mosaic. Google Moon, Google Earth, Google Mars, as well as Google Sky, for that matter, are all composed of tens of thousands of images that are aligned as best as possible with each other and draped over a spherical 'planet,' be it Earth or the moon, for instance," Dantonio told HuffPost via email.

Dantonio owns a special effects company that often creates imagery and models for the U.S. military forces. He explained how the Google Moon software "must make choices as to how it will deal with different lighting, angle and exposure. Further, sometimes the imagery are taken with entirely different spacecraft, and the images have to be scaled or mathematically projected to match the imagery not easily attainable from other sources."

He concludes that artifacts often result when the software can't perfectly match the image.

"The photos are very intriguing," Hansen told HuffPost in an email. "When you really get into the moonbase conspiracy, you learn that much of it is actually based on historical fact. The U.S. has had legitimate plans to build a military base on the moon as far back as 1959, when it proposed a venture they dubbed 'Project Horizon.'

"Many photos, allegedly coming from backyard astronomers or leaked NASA photos, have turned up suspicious-looking images depicting buildings and spacecraft on the moon. The biggest problem we face -- as is the case with these current photos -- is authenticating the images as raw and unaltered. Google Earth obtains their lunar imagery through public domain sources. They don't have their own satellites flying around the backside of the moon to take pictures.

"Is it possible someone might add data to an image depicting buildings and UFOs as a joke? If the raw images from NASA contain the same anomalies, we may be on to something," said Hansen.

Let's give the final word on all this speculation to the Brookings Institution, one of the most highly respected think tanks in Washington, D.C. In 1960, Brookings prepared a report for NASA, titled "Proposed Studies on the Implications of Peaceful Space Activities for Human Affairs."

Page 30 of the report discusses the implications of the potential discovery of extraterrestrial life:

Though intelligent or semi-intelligent life conceivably exists elsewhere in our solar system, if intelligent extraterrestrial life is discovered in the next 20 years, it will very probably be by radio telescope from other solar systems. Evidence of its existence might also be found in artifacts left on the moon or other planets.

The consequences for attitudes and values are unpredictable, but would vary profoundly in different cultures and between groups within complex societies; a crucial factor would be the nature of the communication between us and the other beings. Whether or not Earth would be inspired to an all-out space effort by such a discovery is moot: societies sure of their own place in the universe have disintegrated when confronted by a superior society, and others have survived, even though changed.